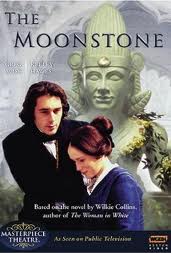 
Wilkie Collins' 1868 THE MOONSTONE presents some interesting problems in terms of phenomenality-categorization.

There's one element of the book that qualifies as a *marvelous* one-- on which I'll comment below-- but it plays a very small role within the narrative.  Because of the presence of this element, I would have to classify the novel as "marvelous," in the same way that I classified this film as *uncanny* even though it only possessed two very minor elements of the uncanny.  I noted in the cited essay that I term such small-beer elements to be "the marginal metaphenomenal," and that applies just as well to Collins' novel.

The famous plot of THE MOONSTONE deals with a fabulous diamond, originally from the head of a Hindu idol, which is stolen from India by a reprobate British officer.  After the thief dies he leaves the diamond-- rumored to be cursed-- to his niece Rachel, a heiress being courted by her two first cousins Franklin and Godfrey.  (Nowhere in the novel does anyone remark on this level of consanguinity: one assumes that both Collins and his original English audience found it unremarkable, at least for the aristocracy.)  A trio of Indians, dedicated to returning the holy diamond to India, haunts the steps of Rachel and her protectors.  Because the unnamed Indians are so fantastically dedicated to their unique task, Collins' novel *might* be classified as uncanny because the Indians' "bizarre crime" (which is only a crime in the technical sense of the English law, of course) makes such a strong affective impact on the reader, and takes on a near-supernatural aspect at the conclusion even though technically nothing supernatural occurs.  The same logic applies to the "exotic lands and customs" trope.

The one aspect that propels the novel into the "marvelous" category appears early in MOONSTONE and never comes up again.  Because Collins wanted to give his Indians an almost supernatural ability to be wherever he wanted them to be-- and because he surely knew that they would hardly blend in well with British society-- Collins has one of his characters overhear the Indians using an unnamed English boy in a divinatory ceremony.  It establishes the possibility-- which the reader must take seriously even if no one in the novel does so-- that the boy is a real medium who can tell the Indians at all times where to locate the diamond.  It's a clever device, and I personally consider it veracious enough to classify MOONSTONE as "marvelous," even though I realize most readers won't take note of it.

The first English-langauge adaptation of Collins' novel, filmed by Monogram Studios, does not aspire to be much more than a routine mystery.  The film shifts its location shifted to America, but keeps most of the character-names but with altered functions.  The script-- directed by Reginald Barker, best known today for 1929's SEVEN KEYS FROM BALDPATE-- essentially sticks to adapting one of the novel's opening plotlines, the actual theft of the diamond, and quickly solves the theft without any of the characters ever leaving the "old dark house" where the crime's committed.  Possible Indian fanatics are mentioned but never surface; one Indian manservant of the Franklin character appears but proves to be innocent of the crime.  Some reviewers have enjoyed Barker's MOONSTONE on the basis of how much it does on a low budget but I still found it boring, possibly because leading man David Manners (as Franklin), having no stronger talents on which to lean, sucks up the air whenever he speaks.  The only interesting change is that in deference to American feelings on cousin-marriage, Franklin, sweetheart to Rachel, is no longer related to her.  However, Godfrey is still her first cousin, and actor Jameson Thomas gets one nice moment where he leers lustfully at the unsuspecting Rachel-- though one never knows if he's more interested in her body or her bank account.  Despite the mystery trappings, nothing suggesting the strangeness of "the uncanny" ever transpires.

In contrast, the 1997 MOONSTONE-- the third of three British adaptations of the novel-- is far truer to the novel's events, even though, in order to condense the book into two hours, many characters and plotlines are omitted. Not surprisingly, Collins' divination-device is dropped, thus excluding the film from possessing any claim of marvelous metaphenomenality.  The Indians are present this time, and though they aren't as prevalent as they are in the book they do convey the same uncanny aspects presented in Collins' book.  Nevertheless, though the film does a creditable job of adapting all the salient elements of the novel, it's as disappointing as the Monogram flick.  None of Collins' deeper myth-themes-- the sympathy for the outsider, the psychology of the English classes-- receive more than cursory treatment here.  The professionalism of the acting and directing suggests that the production might have been able to convey some of Collins' themes, and that the film's failure to do so comes down, as much as the Barker film, to concerns of time and money.