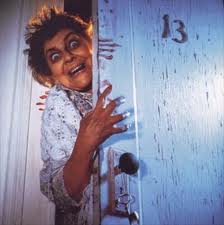 This rural psycho movie isn't anywhere near the best of its kind, yet it's far from the worst either.

I've no knowledge whatever about the writer-director team, except that it was a "family affair" as the director was billed as "Jim McCullough Senior" and the writer as "Jim McCullough Junior."  IMDB lists a smattering of credits for both creators, some together and some separately.  None of their works, together or separately, are particularly noteworthy, though probably 1976's CREATURE OF BLACK LAKE is their best-known work thanks to its having a few name-actors and having been circulated to television in many venues.

The actors in MOUNTAINTOP are unknowns, suggesting that this was a pretty low-budget psycho-film.  For all that, McCullough's direction isn't as unattractive as that of many rock-bottom productions.  The story concerns how Evelyn Chambers, manager of an isolated rural motel, goes bonkers and starts knocking off all of her guests.  The basic story had been done better many times, but McCullough has made some attempt to keep the thrill-level high.  At the very least, the camera's always active; something's always going on at the Mountaintop Motel.

McCullough Junior's script is frustrating in that it suggests a backstory to Evelyn's nuttiness that never appears on camera.  Perhaps those scenes were cut to save cash?  It certainly starts memorably enough. Evelyn occupies her secluded motel with only her young daughter Lori for company.  While Evelyn is first seen trying to clear varmints of her garden, using the same sickle that will later carve human flesh, Lori is off in some room, conducting what looks like a Satanic ceremony in order to contact her dead father.  Evelyn breaks in on Lori's ceremony and goes berserk for no clear reason (maybe she doesn't like the impugnment of her parenting skills).  Evelyn accidentally kills Lori, which triggers her descent into total madness.  However, though she calls the local law out to report Lori's death, and though we later learn that Evelyn's already spent some time in a nuthouse, the sheriff believes that Lori died by accident.  This leaves Evelyn-- now haunted by the guilt-making voice of her dead daughter-- free to start picking off the few tenants that start arriving at the motel.

The tenants are mostly unmemorable, though some of Evelyn's murderous assaults are better, as when she turns loose a poisonous snake on a honeymoon couple.  The only good characters are a pair of girls whose car breaks down and get picked up by a driver who tells them he's a record producer as a scam to get them into bed.  Surprisingly, the McCulloughs make these three characters fairly affecting, particularly when the driver confesses his turpitude but still tries to defend one of the girls against Evelyn.  Atypically for the genre, it's the girl who *doesn't* sleep with the phony producer who gets killed.

There's one brief suggestion that the haunting girl may be real, but it's not supported by anything substantive, so I file this killer-diller under the uncanny version of the "perilous psychos" trope.

Posted by Gene Phillips at 3:48 PM
Email ThisBlogThis!Share to TwitterShare to FacebookShare to Pinterest
Labels: perilous psychos (u)