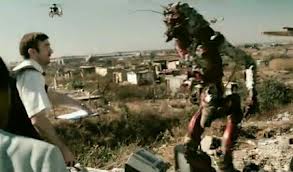 
DISTRICT 9, which looks to be the most expensive SF-film ever shot in South Africa (in particular contrast to this one), might be considered the opposite side of the coin to 1988's ALIEN NATION.  In both films, a wayward spaecehip filled with quasi-humanoid aliens arrives on (or above) Earth.  In NATION Earth responds with a certain liberal largesse, allowing the alien "newcomers" to attempt integration with the people of Earth.  DISTRICT presents a darker, more scarred sign of that coin, for in Neil Blomkamp's film the insectoid visitors, roughly a million in number and given the nickname "Prawns," are confined to a refuse-filled "concentration camp" policed by the South African military.

On the DVD the filmmakers assert that their film is not made to be expressly political, but to be entertaining, to get the most out of an uncomfortable conflict.  There's some truth in this, but the filmmakers certainly knew in advance that merely setting this "first contact" story in South Africa would set all manner of political resonances, ranging from those associated with apartheid to the concentration camps of WWII.  One facet of the screenplay allows for more "free play" than the real-life situations, though.  The prawns are dominated by the human military, but the creatures bring with them an alien super-technology.  Because this technology can only be activated by prawn-biology, human authorities have every motive not just to oppress their unwanted visitors, but to exploit and experiment upon them in order to harness this advanced weaponry.

Enter "ordinary hero' (what I've termed a "demihero" elsewhere) Wikus van der Merwe, a bureaucrat put in charge of evicting the prawns from their original confinement to a new and even less desireable location.  By chance Wikus is infected by an alien artifact, and begins to mutate into one of the prawns.  Desperate for some method of reversing the change, and ignored by the warmongering authorities, Wikus is forced to make common cause with "Christopher Johnson," one of the more intelligent prawns.  Johnson has doped out a way to return to the spaceship and escape Earth's tender mercies, but needs Wikus' help to do so. Their one advantage is that Wikus' infected biology makes it possible for him to use the devastating weapons of prawn-technology, so that he blows away a lot of nasty Earth-soldiers as well as various disreputable criminal types.  This opposition of violent forces qualifies DISTRICT for the category of the "combative drama," for the emphasis is less upon the physical conflict than Wikus' gradual ability to think beyond his own predicament once he's walked a mile in alien feet.

The film received some criticism for supposedly stereotyping the aforesaid "criminals" Wikus encounters, since all of them are black Africans, though they are specifically Nigerians rather than black natives of South Africa.  Some critics didn't like the invocation of the "black cannibal" trope (the Nigerian ganglord wants to eat Wikus to gain his power), but this is excusable partly in that the whites are just as nasty and retrograde in their own ways-- particularly Wikus' main opponent, a mean militarist named Koobus.  Further, though DISTRICT is not technically a comedy, the "cannibal" trope is invoked with a good deal of humor, and is no more racist than the teaming of Wikus and Johnson as an "odd human-alien couple."

Posted by Gene Phillips at 12:58 PM
Email ThisBlogThis!Share to TwitterShare to FacebookShare to Pinterest
Labels: combative dramas, the marvelous