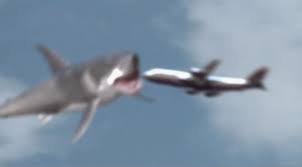 
Though most of the "colossal critter" movies that show up on the SYFY Channel are pretty lean pickings, I've noticed that the reviews they receive on IMDB usually fall into two categories.

One is the "outrage against the standards of good entertainment" review, in which the reviewer tears apart the flick based on its many failings of sound plot, believable characters, and so on.

The other is the "this is so bad it's funny" review.  Of these two review-types, this one is the more interesting, because it raises the question: once a movie has decided to revel in its badness, can it be fairly critiqued?

Is it at all feasible to conceive of "standards" for a deliberately bad film?

My answer is, yes and no. As to the "yes," anyone can conceive of such standards.  But since the whole idea of a bad movie is to flout one's expectations of formal merit, there would seem to be no way to make those standards anything but purely personal, which would make the answer into an operative "no."

Take for instance the Asylum film MEGASHARK VS. GIANT OCTOPUS, a 2009 opus which seems to have received far greater attention than most of SYFY's cookie-cutter airings.  This monster-mashup has just one scene that grabs me in the part of my cortex that says, "this is so deliriously stupid it's funny:" the above scene in which the Megashark leaps out of the ocean and gobbles up a 747 airliner, dragging it down into the sea with it.  One fan liked the scene so much that he devoted an IMDB thread to it, terming it "the greatest scene in all Movie Hollywood."  I find myself wondering if some of the appeal of this scene rests with bringing together two icons from 1970s cinema: the rapacious shark and the endangered 747.

However, for me that scene provides the only real entertainment in MEGASHARK.  The big fish's opponent, the Giant Octopus, is by no means as nicely rendered as this "Spawn of Jaws," and the script is otherwise dead-serious and deadly dull.  There's one scene in which former singer Debbie Gibson, playing a tough Navy officer, lays out a panicky seaman with a deft punch in the face, but that's the only other scene I recall.  The clash of the titanic terrors is a distinct disappointment.

The same crummy level of FX applies to the battle of the two gargantuas of MEGA PYTHON VS. GATOROID, and as an added minus, neither beastie even looks as passably good as the Megashark.  What MEGA PYTHON has going for it is a more enjoyable subplot than MEGASHARK's dull routine: an emnity between the movie's two female characters, both played by female pop-singing idols-- the aforementioned Debbie Gibson as park ranger O'Hara and Brittani as animal activist Doctor Riley.  The subplot builds to a catfight-battle between the two termagants in a much more pleasing manner than the main plot dealing with the monsters-- though, to be sure, the climactic Brittani-Gibson fight doesn't rise to the level of the best cinematic f/f contests. 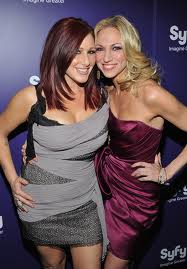 Many of the "colossal critter" flicks futz around with issues of conservation and animal activism, almost always treated with a politically-correct solemnity.  In place of this, MEGA PYTHON treats both the "activist" and the "conservationist" as stupid, ego-obsessed characters spoiling for a fight.  Riley starts the idiocy by releasing pythons into the ecosystem of a Florida State Park, but O'Hara compounds it by breeding huge gators to eat the pythons-- almost like a monster-movie version of "I Know an Old Lady Who Swallowed a Fly."

Brittani and Gibson brought enough vivacity to their cartoonish roles that MEGA PYTHON managed to score several times with my delirium-loving cortex, which is the only standard I can use to elevate the PYTHON above its more popular SHARK kindred.  That, and the fact that during the movie Micky Dolenz, playing himself, meets a horrible death before he can sing even one note.
Posted by Gene Phillips at 2:16 PM
Email ThisBlogThis!Share to TwitterShare to FacebookShare to Pinterest
Labels: combative dramas, the marvelous