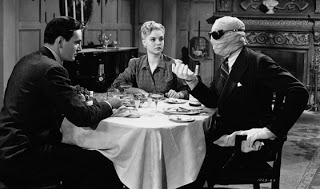 
The great FX work of James Whale's THE INVISIBLE MAN is often the focus of reviews of this film, as is the unique voice "personality" provided by the star enacting the titular role, Claude Rains. To avoid repetition, let such plaudits be taken as already stated.

One thing I found most interesting about the script by R.C Sherriff, Philip Wylie and Preston Sturges is that it has a darker feel to it than the majority of 1930s horror films.  By "darker" I don't mean simply that the film contains monstrous characters who do horrible things, since most horror films have such elements.  Rather, a work is especially "dark" in the sense of what Northrop Frye calls an "irony" if all the characters exist in a world that seems fundamentally hopeless, one where no one's positive actions amount to much. Neither of Whale's FRANKENSTEIN films conform to this pattern, since in both the scientist is allowed to escape the penalty for his hubris and to be "saved" by his fiancee.  One 1930s film that comes closer to the pattern of the irony is 1934's THE BLACK CAT, which conjures a bleak vision of life despite allowing two innocents to avoid being caught in the mills of the gods.  But most horror-films conform to the pattern of the drama, which allows for some degree of comparative victory for the forces of life, as we see in THE MOST DANGEROUS GAME and most of the sequels to the original INVISIBLE MAN film.

What most struck me as ironic in Whale's INVISIBLE MAN is that its script manages to show both the way of the risk-taker and the way of the conservative plodder as equally doomed.

Twice the script intones some variation on the familiar (if not necessarily original) refrain: "he meddled in things that man should leave alone."  Certainly Doctor Griffin's foolhardy experiment, in which he tests the serum "monocane" on himself, is far from salutary in its effects.  Griffin not only becomes invisible but also insane, and he plots to use his unseeable status to gain absolute power over the world.  In his godlike ambition he forgets nearly all of his connections to ordinary humanity, particularly to his fiancee Flora-- a character invented for the film, since the Wells novel, like most in his oeuvre, is romance-free.  Griffin takes a foolish risk and kills countless innocent victims.  Many older horror films don't date well with modern audiences, but the scene in which Griffin causes a train to derail, implicitly killing dozens of passengers, remains as bracing as it was in 1933.  In contrast to the more "sinned-against" character of the sequel, Griffin's climactic death is something of a relief, since the audience knows that there was no way back for this character.

However, the character of Kemp, the "conservative plodder," is no better.  In contrast to the Kemp of the Wells novel, who's rather colorless in his righteousness, the character played by William Harrigan comes across as slimy and self-serving.  In one of Kemp's earliest scenes, he not only attempts to put the moves on Flora at a time when she's desperately worried about Griffin's prolonged absence, he also preaches that Griffin was foolish to pursue risky ventures.  Kemp boasts that he's prospered because he only does research for established pharmaceutical companies, rather than pursuing "pure research."  In later scenes Griffin frets about how his original research, and later his search for a cure to his invisible status, have been hampered by his need for money, expressing a hostility to filthy lucre that the socialist H.G. Wells might have found appropriate.  In one of Griffin's less murderous acts of chaos, he robs a bank and simply throws dollar bills about to the delight of local citizens.  Whale and his scripters escalate the novel's association of Griffin and Kemp into a clash of opposites, and when the Invisible Man successfully kills Kemp, the audience can't help feeling some pity for the wretched man even though he remains largely unsympathetic.

There's also a modicum of societal commentary, as in the novel, on the small-town eccentricities which the Invisible One encounters, but this takes a decided back seat to the ideological struggle of Griffin the overeacher and Kemp the plodder-- a struggle which both lose.