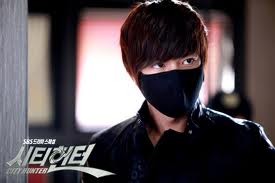 This South Korean-made TV drama, with light overtones of BATMAN and THE COUNT OF MONTE CRISTO, doesn't resemble anything I saw in my spotty viewing of the 1980s anime CITY HUNTER. Perhaps the teleseries builds on something in the original manga, with which I am not familiar.  In my experience the anime is entirely isophenomenal, however escapist in tone.  The only metaphenomenal element here is that, as shown above, the mystery avenger wears a face-mask that adds to his repute as the urban avenger "City Hunter." Aside from the mask, City Hunter has no uniform, somewhat like this character

The masked avenger doesn't make many literal appearances in the soap-operatic narrative; most of the time he appears to be "Johnny Lee," a young, empty-headed "Don Diego" type who promptly gets embroiled in romantic misadventures with a young woman named Kim Nana.   But he's been trained for a mission of vengeance by his adoptive father "Steve Lee."  The elder man was part of a South Korean military contingent that was wiped out during a secret operation thanks to betrayal from within. Steve Lee is the only survivor, and since infant Johnny's father was among those who died, Steve abducts the infant from his mother.  By the time he becomes a young man, Johnny has been trained in the skills of assassination, and plans to use them on the traitors, all safe within the high echelons of South Korea's governmental and business elite.

The martial arts sequences are decent but far from mind-blowing.  The teleseries' main strength are the traditional boy-girl romance elements, acted with a good sense of variety by the leads.  The only symbolism here is sociological in nature, as the narrative repetitively stresses the need to cast out corrupt individuals in South Korean government. The script never goes beyond this literal-minded pattern, so I rate the mythicity as "poor," though the soap-opera itself is reasonably entertaining.

Posted by Gene Phillips at 1:09 PM
Email ThisBlogThis!Share to TwitterShare to FacebookShare to Pinterest
Labels: combative dramas, the uncanny