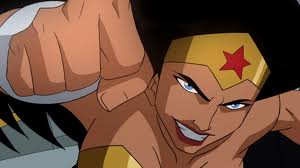 
Though it seems that this direct-to-video animated film apparently was not popular enough to spawn a series, it does deserve some credit for at least attempting to deal with some of the "sexual politics" issues implicit in the "Wonder Woman" concept, which is more than one sees in most of the Amazon's translations into other media.

The main plot-thread that the story keeps constant with other comics-versions is that of pilot Steve Trevor crash-landing upon the magically hidden isle of Themiscrya, home of the immortal Amazons of ancient Greece.  In both the original 1940s version this event is unrelated to the backstory that causes the Amazons' self-exile: Queen Hippolyta's victimization by Heracles.

The script by Michael Jelenic and comics-writer Gail Simone bring these two plot-elements together, so that Steve Trevor becomes Wonder Woman's helper in her quest to stop the depradations of the god who abused Hippolyta in ancient times-- here rewritten from Heracles to the less popular Greek god of war, Ares.  The Wonder Woman comics of the 1980s posited a situation in which Zeus punished Heracles for unspecified crimes by imprisoning him beneath Themiscrya.  Here, because Ares seduced and impregnated Hippolyta with a child-- one whom Hippolyta herself kills-- Zeus gives the Amazons their immortal paradise but also makes them the jailkeepers to Ares.  This makes for an interesting parallel: Ares is brought to the Amazon Isle and is freed upon modern Earth by rogue Amazon Persephone just as Steve Trevor comes to Themiscrya accidentally and is escorted back to modernity by Princess Diana, aka "Wonder Woman."  This almost makes the island something of a womb-symbol: though neither Ares nor Trevor is literally born there, they escape its feminine dominion much as unruly male children escape the womb in such mythic stories such as the birth of the Egyptian Set.

Diana-- the only Amazon conceived upon the island through magical parthenogenesis, and thus the only one without memories of "man's world," also desires to leave the island-womb.  Fittingly, though, her desire for freedom has a less destructive, and hence more feminine, tonality.  In a conversation between Diana and her friend Alexa-- easily the film's best dialogue-- Diana reflects that even though her favorite horse is fed and cared for, the animal still wants to "run free"-- a desire that Diana clearly feels as well.  Thus her curiosity and her desire for the new are Diana's implicit motives for leaving paradise, rather than either the explicit morive of hunting down the escaped Area or (as in the 1940s origin) because of falling in love-at-first-sight with Steve Trevor.

That said, once Wonder Woman leaves her island, the mission to stop Ares predominates, and she shows little or no curiosity about exploring man's world.  Indeed, though Trevor volunteers to help her-- admittedly, with an eye toward seducing her, since this Trevor is a "playa"-- Diana instantly becomes openly condemnatory of both "man's world" and men in general.  Eventually this leads to a little character conflict when Trevor calls her on her simple-minded beliefs about him, but the "sexual politics" argument becomes confused because of this shift in Diana's character.  If she had plunged into man's world with starry-eyed expectations and had been disappointed by its rampant sexism, then her transition into a "man-hater" would have been somewhat more logical.

The Simone-Jelenic script also falters in its logic in trying to find common ground between Diana's primary mission-- to return Trevor to his world and stop Area-- and the franchise's need to launch Wonder Woman as a costumed crusader.  In the 1980s comic books, much was made of Diana being an "ambassador" for her people to the modern world.  This film's script attempts to toss that motivation into the mix, in part as a quick explanation for her costume, in that Hippolyta claims that the outfit has been influenced by the "colors" of Trevor's nation. However, the whole idea of an "ambassadorship" doesn't jell with the straightforward military objective of Diana's anti-Ares mission.

The relative maturity of the dialogue and the level of violence-- the Amazons have swords and they know how to use them-- will not please anyone who wants an "all-ages" Wonder Woman, which may be one reason the video may have generated no more entries.

Best line: an aide telling the President of the U.S. that they've been saved from a war-zombie apocalypse by a bunch of "armored supermodels."

Posted by Gene Phillips at 3:35 PM
Email ThisBlogThis!Share to TwitterShare to FacebookShare to Pinterest
Labels: combative adventures, the marvelous