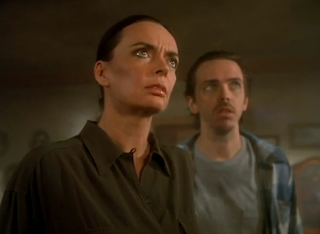 According to Wikipedia Dan Curtis didn't want to revive his famous teleseries DARK SHADOWS (1966-71), but was talked into it by TV executive Brandon Tartikoff.  The revival sputtered out quickly, yielding only 12 episodes, currently available in a DVD collection.

It's easy to Monday-morning quarterback, but in retrospect it's plain that the revival could not successfully translate the daytime horror-soap's greatest asset: its brooding (some would say plodding) narrative pace, never to my recollection leavened by the least bit of comic relief.  By luck and/or design, the original DARK SHADOWS shared the meandering, contemplative ethos of those eras loosely termed "Romantic" and "Victorian."  DARK SHADOWS was the teleseries equivalent of a novel from that period, and not exclusively in the novels of the horror genre, such as FRANKENSTEIN or DRACULA.  That same Old World ethos was no less prominent in naturalistic novels like LES MISERABLES and THE OLD CURIOSITY SHOP.

Though the 1991 SHADOWS is unquestionably well-acted and well-staged, it was conceived (or re-conceived) with the demands of a weekly teleseries in mind.  There was no question of keeping any of that Old World quality under those circumstances, and, as if to compound the problem, the producers chose English actor Ben Cross to essay the pivotal role of the melancholy vampire Barnabas Collins.  Ironically, Cross may well a much more versatile actor than the original Barnabas, Jonathan Frid.  But Frid captured the sense of a man who had been born in the 1700s, a task for which Cross did not prove suited.

The other performers do adequately in adapting adumbrated versions of the original rambling plotlines from the first years of the original series. The only actor who proves most noteworthy, however, is Barbara Steele in the role of Dr. Julia Hoffman.  In interviews Steele occasionally remarked that most of her horror-film roles afforded her little opportunity to utilize the full range of her acting-skills, but at the very least her Julia Hoffman is a much well-realized individual than most of Steele's other roles.

The themes that made the original SHADOWS so interesting are also marginalized, such as the psychological complexities of the Collins family and the "Upstairs, Downstairs" sociological theme that results in a fascinating parallel between modern-day Victoria Winters and Old World witch-woman Angelique, both of whom are "commoners" who dare to love the upper-crust Barnabas.  The best thing about the SHADOWS revival is that Curtis did manage to end the show on a note of closure, which is more than many short-lived teleseries are able to pull off.
Posted by Gene Phillips at 1:45 PM
Email ThisBlogThis!Share to TwitterShare to FacebookShare to Pinterest
Labels: the marvelous