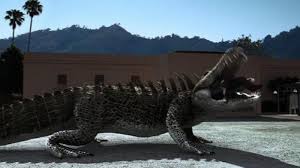 Based on my results with these three "colossal critter" films, maybe I'll stick with those of that have a "vs." in the title from now on.  It's not that these combative films are all that much better than the subcombative ones, but the former show a greater propensity toward the absurd.

I started off my mini-marathon of gobbling gargantuas with SUPERGATOR, one of the two reptilian marauders who would be cage-fighting one another three years later.  The other one, DINOCROC, I did not get the chance to screen, but since it came out three years earlier, possibly it set the pattern for this spate of films associated with Roger Corman's production company (or companies, as the case may be).

The design of the big gator, apparently brought into being by a nasty company trying to weaponize growth hormones, is quite underwhelming.  The best the CGI guys could do, as shown above, was to stick stegosaurus-like spikes on the creature's back.  As is often the case in these flicks, two separate teams of professionals must converge in order to join their resources and kill the big beast: in this case, the biogeneticist who created the monster and a vulcanologist investigating a possibly live Hawaiian volcano.  The lead actors, Kelly McGillis and Brad "Ned Blessing" Johnson, acquit themselves with this tedium a little better than some of their fellow thespians have. The additional threat of the volcano is a nice touch but it doesn't really dispel the general tedium.  As with most Corman flicks there are some cute but vacuous bimbos tossed into the mix.

DINOCROC VS. SUPERGATOR has a small advantage over SUPERGATOR in that it's directed and co-written by Jim Wynorski.  Wynorski will never be anything but a junk-film director, but in general I've found that he does try to keep his goofy trash scenarios lively.  To be sure, Wynorksi follows closely in the footsteps of Roger Corman by injecting as much bimbo-flesh as he possibly can, but unlike the director of SUPERGATOR, Wynorski seems to choose a better breed of bimbo.
He also throws in a couple of references to Cormanological film-history, as when the bimbo-gamewarden's boat is named "Wild Angel" and a tour-guide shows tourists where "She Gods of Shark Reef" was made.

While SUPERGATOR stuck pretty close to the template, D VS. S at least tosses in other familiar tropes: David Carradine as the evil mogul whose company creates the two beasts (guess neither one is supposed to be a "dino" anymore), a karate-chopping mercenary lady, a "ragin' Cajun" crocodile hunter who tells the audience that "crocodiles and alligators are natural enemies," and a field of giant mushrooms.  Oh, and the bimbo-gamewarden runs around in hot pants.

The almost inevitable disappointment is that in all of these "vs." films, the creature-battles last only three minutes at most, so they're always perfunctory affairs.  Since the "dinocroc" for some reason is able to run around on its hind legs like a T-Rex, the poor supergator seems outmatched from the start.  Bad form, Wynorski! 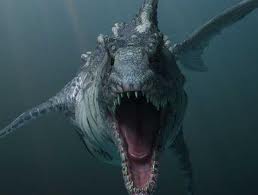 Then it's back to pure tedium with DINOSHARK.  Director Kevin O'Neill has a long resume as a visual effects man on some above-average fantasy-films, as well as some which, like the yet-unscreened-by-me DINOCROC, are probably no better than they have to be.  DINOCROC was the  first of O'Neill's four director-credits, but DINOSHARK doesn't engender in me any fierce desire to see his other efforts.  Most of the time the viewer doesn't even get much of a look at the malefic monster, so it's not even on a par with the supergator in that regard.

The attempts of the humans to track down the "dinosaur-shark" are dull, dull, dull, and the beast's attacks are not much better.  Only at the very end does the female lead get the best line, one which sums up the real appeal of these "nature's revenge" flicks, as she blows away the monster shark:


Posted by Gene Phillips at 2:02 PM
Email ThisBlogThis!Share to TwitterShare to FacebookShare to Pinterest
Labels: combative dramas, the marvelous