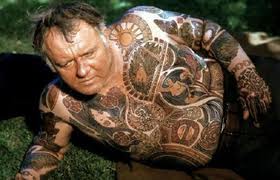 American cinema of the 1960 was replete with many "artsy" films, the belated spawn of the French New Wave.  Jack Smight's adaptation of three Ray Bradbury stories from the author's collection THE ILLUSTRATED MAN had an advantage over other metaphenomenal art-films, however, in that many of Bradbury's stories of the 1950s and 1960s, sometimes appearing in tony magazines like ESQUIRE, utilized the same "high-art" approach as the New Wave's films.

I don't know whether Smight or his scriptwriter Howard b. Kreitsek chose the three stories out of the eighteen in the collection, but someone certainly chose the stories with an eye to the "generation gap" prevalent in the period's culture. Only one of Bradbury's stories, however, actually plays to that concept, suggesting that the filmmakers were not that concerned with fidelity to Bradbury.

One of the film's central conceits takes the opposite of the usual Hollywood approach to anthology-films: instead of featuring dozens of disparate actors in the assorted stories, actors Rod Steiger and Claire Bloom are in all three stories as well as the "wraparound" story, a device also borrowed from the book but given a very different treatment.

Discounting the wraparound for the moment, the lead story "The Veldt" is the closest to Bradbury's version.  Bradbury's story deals with the deadly result of parents allowing their children to be "babysat" by the virtual-reality "television" of the future.  Bradbury's story is a little more of a screed against parental permissiveness, while Smight's version tends more to show as inevitable the children's deadly rebellion against their parental units.

"The Long Rain" deals with the psychological dissolution of a team of soldiers stationed on eternally rainy Venus.  Of the three discrete stories, this is the more visually spectacular.  The original story mentions, but does not show, native Venusians hostile to the soldiers, aligning the story with Joseph Conrad's tales of colonial disintegration.  The film-version does not mention natives; in place of colonialism, the filmmakers-- perhaps with an eye to the ongoing Vietnam conflict-- emphasize the conflict of the rank-and-file soldiers with their commander.

"Last Night of the World," however, entirely rewrites the substance of Bradbury's tale, which I discussed in greater detail here.   Since this story has no overt conflict, it's not surprising that Smight and Kreitsik rewrote it, changing it from a gentle elegy for all humanity to a condemnation of the tragic results of believing in false oracles.

The wraparound, however, is the part of the film that holds up best for current audiences.  In the book, a young man wandering in the wilds of America simply stumbles across an "illustrated man," a freak whose body is entirely covered with tattoo-like images.  When the wanderer gazes at any image for a long enough period, he "sees" the story behind the image, which is one of the stories in the book.  The wraparound is not much used in the prose anthology, as it would have become quickly tedious.  But in the film the meeting of the wanderer and the illustrated man in the Smight film (dubbed "Carl" and "Willie" respectively) is one that escalates in strangeness between the three stories, taking on increasingly sinister tones.  The wraparound in the book simply ends when the wanderer runs away, having seen a tattoo-image of his being murdered by the Illustrated Man.  Smight expands on this, giving a sort of chimerical "reason" as to why the fated hostility evolves between the two strangers. In essence, as in the other stories, a conflict between an "older generation" and a "younger generation" seems to be at the root of the conflict.  There might even be some influence from the Frazerian concept of the "sacred king" who advances to his position by killing the old king, but I can't say that Smight's other works reflect a strong interest in mythography.

I should note that Smight also builds up an element completely absent from the Bradbury wraparound: sex.  Most Bradbury stories avoid sex like the plague, but sexual freedom was a major theme of late 1960s cinema, the Illustrated Man's illustrations come about as a result of his encounter with the witchy Felicia (Bloom).

Posted by Gene Phillips at 4:28 PM
Email ThisBlogThis!Share to TwitterShare to FacebookShare to Pinterest
Labels: the marvelous