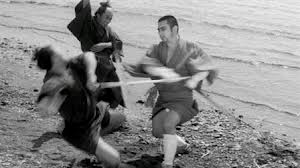 In my review of the original ZATOICHI film, I commented that the narrative thrust was that of the purgative drama rather than the invigorating adventure.  After my viewing of a later Zatoichi entry, I imagined that the bulk of the films about the blind swordsman/masseur probably tended more toward adventure in the later entries.  However, the second film in the series makes the transition more quickly than I expected, as the story places far more emphasis on spectacle than on dramatic agonies.

The central plot maintains the tone of sociological protest in the first film, in that low-class masseur Zatoichi falls into trouble through no fault of his own, but through the sins of the well-born.  While plying his masseur trade, Zatoichi becomes privy to the fact that a great lord is losing his marbles.  The lord's retainers don't want the masseur telling tales, so they attempt to kill him, demonstrating how little the life of a low-class human being has for them.  Zatoichi only survives because of his peerless swordsmanship, enabling him to slay six or seven opponents in one dust-up.

A secondary plotline has Zatoichi consorting with another profession of society's low rung, when he encounters a group of female prostitutes.  Zatoichi's temptation is handled realistically, in contrast to American heroes who would never sully their hands (or whatever).  But the main importance of this plot is to reveal an aspect of Zatoichi's past, that he once lost the love of his life to his own brother.  In fact, Setsu, the one prostitute who befriends the masseur, reminds Zatoichi of his lost wife.  However, a crippled samurai named Yoshio also covets Setsu-- and only after building some suspense as toYoshio's motives does the film reveal that Yoshio is Zatoichi's brother.  The sense that the two siblings are once again opposed due to their common lust for one woman produces a fine undertone of Japanese fatalism.

In the earlier reviews I've explained in detail my reasons for deeming Zatoichi's feats of blind swordmanship to be "uncanny," and I devoted one review to showing how certain types of blind hero failed to transcend the vale of the naturalistic.  However, just to provide one more such example, I watched the Phillipines-produced heist-flick BLIND RAGE, which deals with five blind men who conspire to rob a bank. 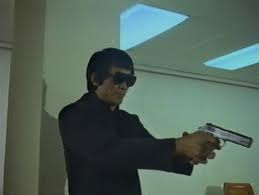 In a broad sense this idea of a "blind man's burglary" is just as improbable as Zatoichi's peerless feats However, RAGE never imparts the unique tonality of "the uncanny" to its improbable events; rather, the improbabilities are simply there, and the audience either accepts them or not.  However, there's not nearly as much one can say about BLIND RAGE. Though producer/writer Leo Fong can be credited with a smattering of "good dumb fun" action films, the pace of RAGE is plodding and its actors are uninspired.  Even Fred Williamson, who only appears for about ten minutes in the film to give it some cachet for American audiences, proves unable to inject RAGE with any charisma. There's a tiny amount of sociological content in the film, as the five blind men "rage" against "the Man" for marginalizing their handicapped status, but even this is forced and unimpressive.  The only amusing moment is when the five blind thieves employ "Braille watches" to synchronize their operation.
Posted by Gene Phillips at 2:11 PM
Email ThisBlogThis!Share to TwitterShare to FacebookShare to Pinterest
Labels: superlative skills (n), superlative skills (u), the naturalistic, the uncanny