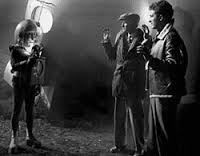 THE MAN FROM PLANET X was the first fantasy-film collaboration, as both writers and producers, between Aubrey Wisberg and Jack Pollexfen, who within the same year also wrote (but did not produce) THE SON OF DR. JEKYLL.  PLANET has the honor of being one of the first films in the vanguard of the decade's burgeoning investment in the SF genre, and still remains a favorite, though the script sometimes wanders in its commitment to its characterization of its alien visitor.

Four characters are assembled to witness, in distinctly low-budget fashion, the first visit of an extraterrestrial to Earth-- specifically, a small island off the coast of Scotland.  Two, Elliott and Mears, are scientists, though Mears has some unexplained bad reputation to his credit.  Another is Elliott's daughter Enid, who has a crush on the fourth, somewhat older man, American journalist Lawrence.  The last relationship provides a modicum of romantic interest, though happily Enid and Lawrence don't take too much plot time from the real star of the show.

Strangely, though the Pollexfen-Wisberg team sought to give their visitor a sense of visual strangeness-- seen above in both the design of the air-helmeted alien and his spaceship-- their science is no better than the FLASH GORDON serial of the 1940s, in that the scientists' first inkling of extraterrestial advent is the appearance of, not a mere spaceship, but a whole *planet* that has wandered into Earth's solar system, yet fails to cause the sort of gravitational effects that such a body ought to have.  Since we later learn that "Planet X" is dying, it seems impractical that the alien and his unseen people would choose to pilot it around like a ship.  Perhaps, for all the scientific fallacies incumbent on the idea of the "invading planet," there's some archetypal appeal to the idea, even for a production too modest to realize any spectacular effects from it.

The film's first half-hour, during which the Earth-people attempt to establish communication with the visitor, is easily the strongest.  Since the alien never communicates directly with the protagonists, his motives are initially as murky as the fogbanks pervading the island-- which also serve to conceal the film's dependence on studio locations, aside from brief scenes at the Griffith Observatory.  Initially the alien seems willing to communicate, though he possesses a powerful ray gun that can paralyze the will of its victims.  While the others aren't looking, Mears turns on the visitor, attempting to cut off the X-ite's air supply in order to learn his secrets.

The alien survives Mears' interference and returns to his ship with Enid in tow.  At this point the script's implicit sympathy for the exploring ET is inverted, as the Earthpeople learn that the Man from Planet X is the vanguard of an invasion force, set to help his people settle the Earth and get rid of its current inhabitants.  In the end the Planet X invader is defeated and his people are diverted, but curiously, the script gives Enid a last line in which she expresses a confusing sympathy for the alien trespasser.

Still, the moody quality of this low-budget effort, principally the creation of director Edgar G. Ulmer, persuades one to like PLANET X despite its flaws.  One can't say the same of NEANDERTHAL MAN. 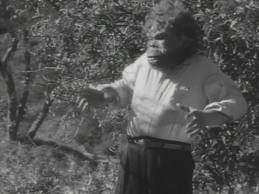 I've found many a silk purse amid sow's ears like TWELVE TO THE MOON and PHANTOM FROM 10,000 LEAGUES, but this "Dr. Jekyll and Mister Caveman" outing defeats me.

In contrast to PLANET X, which sets up the protagonists in an adept manner, NEANDERTHAL assembles its cast of characters in a clumsy fashion.  The earliest scenes deal with a hunter who is dumbfounded to see a saber-toothed tiger roaming about in the California High Sierras.  He fades out of the story, but game warden Oakes also sees the strange beast, usually played by a modern tiger, though at one point the filmmakers insert a shot of a tigerskin rug wearing "tusks" because they couldn't get the tiger to wear them!  Oakes contacts a university zoologist named Harkness, the principal viewpoint character of the story.  Harkness seeks to confer with a local scientist named Groves who lives in the area, but the scientist is absent from his house, though Harkness takes dinner with Groves' fiancee Ruth and his daughter Jan.

Groves is first seen in a nearby city, having a row with other scientists who reject outright Groves' theory that neanderthal men had the same innate intelligence as modern men.  The script fails to provide any psychological reason for Groves to be so obsessed with this idée fixe, but he's not content to rail at his colleagues, but goes off on Harkness when he finds a strange guest at dinner.  This might be a little more understandable if Groves were an "alpha male" type who proved fiercely protective of either fiancee, daughter, or both.  But there's no romantic chemistry between Harkness and any of the women in the household, be it daughter Jan, fiancee Ruth or a strange deaf-and-dumb servant named Celia.

It comes out that as a consequence of Groves' researches into matters prehistoric, he's come up with a serum that can regress any species into its primordial ancestor.  He's responsible for regressing a house cat into the saber-toothed tiger, as well as covering things up when Harkness and Oakes shoot the tiger.  Groves is also apparently responsible for substituting the shot-up corpse of a deer for the tiger, though the script never establishes how he arranges this complicated rigamarole.

Harkness later learns, by searching the doctor's lab, that he also experimented on regressing his servant Celia, and leaves the incriminating evidence around, in the form of photographs showing Celia at different stages of regression.  However, according to the doctor's notes the female of the species proved less suscepible to primitive regression-- something of a backhand compliment, I suppose-- so Groves, after unleashing yet another sabre-toothed tiger on an already excited community, decides to experiment on himself a la Doctor Jekyll.

Like his Victorian antecedent, Groves soon learns that "going primitive" isn't all that it's cracked up to be, and essentially rebuts his own theory.  Groves repeatedly transforms into a bestial ape-man who kills or injures everyone he encounters-- more on which later.  Thanks to Harkness' detective work, a manhunt for the killer ape-man is organized.  The neanderthal man is attacked on two fronts, being first savaged by his own tigerish creation and then shot by the hunters.  In approved werewolf style, he reverts to his human self as he dies of his wounds.

The one victim whose life is spared by the Neanderthal Man is a curious one: a woman named Nola, who is implicitly raped by the ape-man after he injures her date.  The word "rape" is never actually used, but Nola's description of the way the creature attacked her leaves little doubt.  It's strange to see so visceral a topic raised in an early 1950s SF-film, but it seems virtually thrown in for a quick exploitative effect.  It seems particularly strange given that Groves is so obsessed with his theory that he seems to have no passion for either his fiancee or the serving-girl he experiments upon.  But if Pollexfen and Wisberg meant this development to suggest his unbridled id, the scene fails to generate any such insights.

Additionally, the dialogue in NEANDERTHAL is one of the worst I've seen in a film of the period.  At least Ed Wood's dialogue was entertaining in its demented way.


Posted by Gene Phillips at 3:48 PM
Email ThisBlogThis!Share to TwitterShare to FacebookShare to Pinterest
Labels: the marvelous