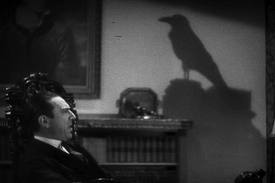 
It's axiomatic that Universal Studios' THE RAVEN was initiated to follow up the company's box-office success from the previous year, THE BLACK CAT.  Both films derived from supposed inspiration by Edgar Allen Poe works (even down to both of them using animals in the titles), both featured two of the era's greatest horror-stars pitted against one another, and both dwell upon Poe's theme of "thanatophilia," albeit in ways that have nothing much to do with Poe's themes.

However, in terms of story-structure, THE RAVEN most resembles another horror-film released in the same month-- June of 1935-- as the Universal film.  Universal's THE RAVEN and MGM's MAD LOVE both pursue the idea of a surgeon who falls madly in love with another man's woman, and who attempts to avenge himself on all those who oppose him-- an idea that appears nowhere in 1934's THE BLACK CAT.  In addition, though both film-scripts were the efforts of several screenwriters, both movies have one writer in common: Guy Endore.

Endore was not the first writer MGM assigned to adapt Maurice Renard's 1920 novel THE HANDS OF ORLAC into a working script, but according to Wikipedia he is among those who collaborated on early drafts with MAD LOVE's director Karl Freund.  Wiki also credits Endore with having presented the original 19-page treatment that evolved in the 1935 RAVEN.  Which came first?  Lacking a preicise timeline, I can't be sure.  But I don't find it incredible to imagine something along these lines: someone, be it Endore or some other script-collaborator on MAD LOVE, introduced the element of the woman-stealing surgeon, an element which, going by available synopsi, does not appear in either the Renard novel or the silent 1924 film adaptation.  Endore then sought to "recycle" this basic idea into his treatment for THE RAVEN, since the actual Poe work, the famous long poem, offers no plot that a mainstream movie-company could use.  Purely as a hypothesis I tend to credit Endore with introducing this element, if only because he presents another case of "doomed love" in his 1933 novel THE WEREWOLF OF PARIS, though Endore's protagonist in this novel is not otherwise comparable to the mad surgeons of MAD LOVE or THE RAVEN.

I dwell on this point in part because THE RAVEN, though quite enjoyable, feels very much like a mechanical replay of the quite superior treatment of "l'amour fou" in MAD LOVE.  Since I haven't yet reviewed the Freund film, I can't offer my specific reasons for claiming MAD LOVE's superiority.  All that I can say here is that even on the larger-than-life terms offered by both of these uncanny films, MAD LOVE's madman is more believable than that of THE RAVEN.

At no point does RAVEN's script attempt to offer even a sketchy psychological outline for the extreme thanatophilia professed by the film's premiere monster, Dr. Vollin (Bela Lugosi).  "Death is my talisman," Vollin tells the museum representative who visits his house, a house tricked out with full-sized reproductions of Poe's torture devices from the story "Pit and the Pendulum."  But early in the film, Vollin is not mad, just rather eccentric in his love for Poe.  He has apparently profited from his practice to the extent that he's able to retire from surgery and to indulge his mild obsession in his secluded mansion, with no other human beings around except his servants.

Vollin's only vulnerability is his ego.  When young dancer Jean Thatcher is injured in a car accident, her father Judge Thatcher is told that Vollin is the only surgeon skilled enough to save Jean from death.  Vollin is flattered that his peers have given him this compliment, and yields to the judge's pleas, coming out of retirement to save Jean's life.

However, Jean's beauty captivates Vollin, particularly when she composes a dance-revue in honor of Vollin's favorite author, even dressing up like a "raven."  Since Vollin keeps a statue of a raven in his study, Jean unintentionally becomes for Vollin the embodiment of all the "lost loves" of Poe's stories and verse.  One may speculate that perhaps Vollin also had some "lost love" in the past with whom he has merged the image of Jean, but the film remains blithely uninterested in providing any deep psychological insights.  One imagines director Lew Landers saying, "What motivation?  He's Bela Lugosi, so he's a crazy guy!"

Judge Thatcher sees Jean-- affianced to an age-appropriate young man, also a doctor-- in danger of falling for Vollin-- something the audience never sees, since aside from her dance-tribute Jean shows no special fondness for her savior.  Thatcher is horrified to see the obsessed doctor express passion for Jean, so the judge breaks off contact with Vollin.  The judge's high-handed rejection sends Vollin over the edge; he desires revenge, but fears that he doesn't have the moxie to kill his enemies.  By dumb luck Edmund Bateman (Boris Karloff), a fugitive from justice, comes to Vollin with the mistaken idea that Vollin can surgically alter his face and help him escape the law.  Vollin mutilates Bateman in order to make the crook serve him in gaining his revenge.  In jig time Vollin lures the Thatchers and some other guests to a "make-up party," but it turns out to be a torture session.  Only Bateman's hatred for Vollin, as well as the thug's rather improbable tender feelings toward Jean, saves Vollin's victims and dooms Vollin to one of his own torture-devices.

The main deficit of RAVEN is not so much the psychological flatness of Vollin, which is overcome by the barnstorming performance of Bela Lugosi.  Rather, it's that all of his victims are colorless bores.  Judge Thatcher, as noted above, is arrogant and unfeeling toward the man who saved his daughter's life, obviously valuing propriety above all else.  Jean's tribute to Vollin is the extent to which she acknowledges her debt, but after that, he's almost a joke with which to taunt her fiancee Jerry ("He kinda likes me, y'know?")  Handsome age-appropriate suitors to the leading lady are almost always bland in Universal horror films, but even by those standards Jerry is a bumptious clod.  And it's almost inevitable that the comedy relief characters are tedium personified.

Finally, we come to Boris Karloff.  Despite the fact that Vollin is the center of the narrative, while Bateman is merely a vividly freaky henchman, Karloff received both top billing in the credits and a higher salary than his co-star.  The level of Karloff's performance in RAVEN doesn't merit this treatment.  Though Karloff delivers some nice lines here, such as the quotable "maybe if a man looks ugly he does ugly things," Bateman's not any better developed than Vollin, and Karloff seems to recycle elements of earlier performances to compensate.  In the scene where Bateman learns, in graphic detail, how Vollin has ruined his face, he growls and shakes his fist at the safely hidden surgeon, as if Bateman had suddenly channeled the Frankenstein Monster.  The same is true of the thug's sudden compassion for Jean Thatcher; it comes to pass because the scripters needed Bateman to save the nice people and doom Vollin.

There is some satisfaction in the fact that of the six horror-collaborations of Lugosi and Karloff, this is the one in which Lugosi's flamboyance overmasters Karloff's brutishness.  The same dichotomy prevailed to some extent in SON OF FRANKENSTEIN, where Lugosi'sYgor is far more interesting than Karloff's Monster, even though there's no doubt that the Monster is the central character.  The two actors were narrative equals in BLACK CAT, but of the other three horror-films (and obviously I'm omitting the two comedy-collaborations), Karloff's role trumped Lugosi's quite easily in INVISIBLE RAY, BLACK FRIDAY, and THE BODY SNATCHER.

There's no doubt that RAVEN is a fun torture-ride, but it's sublimely ironic that if any 1935 film truly succeeded in emulating the sophisticated perversity of Edgar Ulmer's THE BLACK CAT, it's Freund's MAD LOVE, and not "the big bad raven."

Posted by Gene Phillips at 3:36 PM
Email ThisBlogThis!Share to TwitterShare to FacebookShare to Pinterest
Labels: bizarre crimes and crimefighting (u), freakish flesh (u), the uncanny