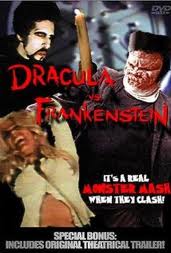 
As many before me have opined, the best way to view Al Adamson's DRACULA VS. FRANKENSTEIN is as a comedy, though technically I have to label it a (melo)drama.  Just to add even more confusion to the category-mix, the main plotline-- that Dracula has a yen to use a mad scientist and the Frankenstein Monster in a grand bid for power-- seems most derived from the Universal "monster mash" comedy ABBOTT AND COSTELLO MEET FRANKENSTEIN.

Indeed, given that DVF is Adamson's ninth film as full-fledged director, it's surprising that the man hadn't made a Frankenstein film before this, since most of his works are cobbled together from a variety of sources, just like the archetypal Mary Shelley monster.  DVF, for instance, started as a biker-film sequel to a successful Adamson film called SATAN'S SADISTS.  Then the script injected the element of mad butchers waylaying people, and this grew into a mad scientist who was a descendant of Doctor Frankenstein.  Then Dracula got into the act as well, not to mention some musical stings ripped off from the original CREATURE FROM THE BLACK LAGOON.

The more mundane basis of the original story is seen in the plight of the viewpoint character Judith (Regina Carroll, the director's wife), who is searching for her missing sister.  Little does Judith know that her sister Joan had her head cut off by the maniac Groton (Lon Chaney Jr.), who serves the will of the mad Dr. Duryea (J. Carroll Naish).  Duryea, like many mad scientists before him, believes that he can create a miracle serum from the blood of murdered victims, with one refinement (if one can call it that): the victim must undergo great trauma to produce the needed effect.  A borrowing from THE TINGLER as well, perhaps?

But Doctor Duryea isn't the only monster in the house, for out of nowhere Dracula shows up in the doctor's lab, conveniently located beneath an amusement park.  The vampire lord, who knows all about the doctor and his plans, reveals that he has located the body of the Frankenstein Monster, concealed by some of Duryea's enemies.  Dracula makes a "quid pro quo" proposition: give me access to your miracle serum and I'll sic the Frankenstein Monster on the only surviving member of your old enemies.  Why Dracula himself doesn't just kill this last pathetic victim-- played by none other than Forrest J. Ackerman-- is never revealed, and for that matter Duryea's blood-serum research is in no way enhanced by the Monster's presence.  Presumably the director felt the Monster had to have something to do to justify his name in the credits.

I'll pass over the excruciating details as to how Judith's search for her sister leads her, and Mike, a newly acquired amateur-detective boyfriend, to Dr. Duryea's hideout.  Both the vampire and the Monster seem to disappear for long stretches of this part of the film, appearing only after Duryea has suffered one of the cinema's most improbable deaths.  One of the funniest scenes appears then, when the Monster attacks  Mike. Mike blinds the creature with a flare, and the Monster mistakenly attacks Dracula until the vampire can drive him off with a whammy.  Surprisingly, Mike actually buys it then, as Dracula incinerates the boyfriend with a bolt of fire from his ring. I think we can fairly assume that Adamson was innocent of any influence from Iron Man's The Mandarin.

To justify the title with which the film was being sold, Adamson then tossed together a last-moment incident in which the Monster falls for Judith and attacks the vampire when Dracula wants to make her one of his kind.  The scene in which the irate undead finally tears apart the Monster by his seams remains the film's high point in bad inventiveness.

I had to think about whether or not to consider this a "combative drama," since I had dismissed THE WEREWOLF AND THE YETI simply because there's no real build to the conflict between the two creatures in that film.  But at last I decided that there is at least the suggestion of an escalating conflict between the vampire and the heir of Frankenstein, so "combative" it is.

Posted by Gene Phillips at 3:49 PM
Email ThisBlogThis!Share to TwitterShare to FacebookShare to Pinterest
Labels: combative dramas, the marvelous