Rarely does one see the first sequel to a film-franchise show a huge positive leap as against the original film.  Some viewers prefer "The Empire Strikes Back" to "A New Hope," but I for one have never seen any such fans express total negativity toward the original.

Despite my negative feelings toward the 2009 STAR TREK reboot, I'll admit that it succeeded in its summer-movie mission.  Whereas the TREK franchise had limped along for years, embraced only by the hardcore fans and thus irrelevant to the mainstream audience, producer-director J.J. Abrams launched the franchise into box-office success at last.  It did so in part by eschewing the "technobabble" of the hardcore SF-fan, and jettisoning the burdensome continuity built up over decades upon the schema pioneered by Roddenberry.

I don't fault Abrams for navigating clear of this narrative morass.  By propelling the TREK franchise into an alternate history, one where (for instance) Spock's planet Vulcan is destroyed, Abrams opened it up the potential to re-imagine the continuity.  In the 2009 film, however, the script by Roberto Orci and Alex Kurtzman suffered from a paucity of imagination no less the worst of the in-continuity predecessors (possibly STAR TREK: GENERATIONS, which resembles the 2009 film in having a menace that spans at least two generations).

Because '09 TREK chose to re-introduce all of the characters-- as well as finding quick ways to propel them into positions of authority-- it's inevitable that the characters don't play off one another as well as they did in Classic Trek.  However, a lot of the "character-moments" designed by Orci and Kurtzman were predictable.  Kirk is the emotional risk-taker (far more so than in the classic series), while Spock is the conservative rule-follower, even though their early experiences show both of them as alienated due to a father-figure, or lack of same.  Other "classic" characters are brought on to do their little turns on the cat-walk, but even some of the eyebrow-raising changes-- such as a love affair between Spock and Uhura-- seemed gratutious.

The intellectual content of the original series-- which, admittedly, was not always terribly deep-- is also jettisoned in favor of a "thriller" approach reminiscent of Abrams' outing on MISSION IMPOSSIBLE 3.  Nothing shows this orientation better than an overlong scene in '09 wherein Kirk and Sulu must battle Romulans on the outside of the villain's ship.

And then there's the villain, a Romulan who just happens to have the same name as a Roman emperor.  Eventually one learns that Nero's raison d'etre is his quest to be avenged on the entire Federation because one of their representatives-- namely, the original version of Mister Spock from the Roddenberry continuity-- attempted to save Nero's planet from destruction but failed.  As motives go, this is a pale rewrite of the one given Khan in STAR TREK II: WRATH OF KHAN.  As if to emphasize the linkage, Nero even tortures a victim with an earwig-like creature much like one used by Khan in the aforesaid movie. 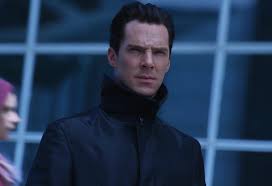 Given that I found '09 no more than diverting, I'm amazed to find that INTO DARKNESS scores in every way wherein the earlier film failed, particularly since the later film shares the same writing-team.  There is one additional writer's credit for Damon Lindelof, though he served as a producer on the first film as well.  Though the characters haven't really spent that much more time together since the first film-- the "five-year mission" does not occur until the end of this film-- the writers manage this time to play off the "classic" personas in terms of both their original history and their revised elements.  Naturally as in the series Spock and Kirk get the lion's share of attention, but every character gets more than just a little turn, playing some substantive role in the plot.  The script's use of both pathos and humor is also far more pronounced.

The difference may be explained by the director and his writers having played to their strengths in a concerted fashion.  The reboot still has none of the original franchise's fascination with strange alien cultures and cosmological phenomenon; again what we have is a futuristic thriller.  But in place of a nebulous revenge-seeking foe who amounts to little more than "Khan Noonian Singh writ small," this script not only produces a new and viable verison of Khan, but adds a secondary villain designed as a condemnation of military imperialism-- though with a good deal less pontification than one sees in earlier TREK movies.  I particularly liked the fact that the script takes issue with the prevalent cultural idea of simply "blowing away" an enemy political figure deemed to be dangerous to a government's interests.

I won't say that there aren't problems with the exceptionally complicated plotline.  Many aspects of the plotline involving the two villains fall apart when one asks the question, "would Character A really do X in response to the actions of Character B?"  But films often fudge such details.  The backstory of the murder-story in Hitchcock's VERTIGO is just as logically untenable as the backstory details in DARKNESS, but VERTIGO remains a classic despite its well concealed lapses. DARKNESS, if not a classic for the ages, does a decent job of involving the audience in the passions and complications of the characters' lives, so that only later will some audience-members experience the famed "refrigerator moment."

In contrast to the mediocre action-scenes of the '09 film, Abrams brings a sense of visceral excitement to both outer space battles and hand-to-hand fights, as well as gleaning the maximum dramatic impact from them.  Since my original viewing of "Space Seed" from the classic series, I had wondered what might have transpired had Khan had a dust-up with Spock.  Now thanks to DARKNESS, I not only get my Khan vs. Spock fight, but one that fits in with the dramatic arc between Kirk and Spock.
EDIT: I originally rated the mythicity of the latter film as "good," but have since downgraded itto "fair."


Posted by Gene Phillips at 3:41 PM
Email ThisBlogThis!Share to TwitterShare to FacebookShare to Pinterest
Labels: combative dramas, the marvelous