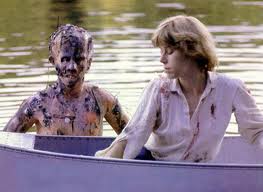 
Though FRIDAY THE 13TH was unquestionably prompted by the success of 1978's HALLOWEEN, Sean Cunningham's work displays a very different aesthetic.  Whereas Carpenter's film has a cerebral quality that never entirely vanishes even during its most visceral sequences, Cunningham's signature work shows a more purely visceral appeal.  Cunningham's frequent lingering shots of the inscrutable forests surrounding Camp Crystal Lake put me in mind of Meir Zarchi's 1978 work I SPIT ON YOUR GRAVE.  I doubt that Cunningham, who at the time was hoping for a solid financial success in his career, would have emulated Zarchi's controversial GRAVE had he seen it.  Still, the similarities between the two go beyond just content and setting. Both films place characters who are fundamentally guiltless in horrifically violent circumstances.  In a DVD commentary Cunningham denied that the appeal of the film was that of "identifying with the killer," as asserted by Roger Ebert and others.  His explanation invoked rather the truism that FRIDAY was about "bad things happening to good people."

PSYCHO may be a greater influence on FRIDAY than the Carpenter film. The musical score by Harry Manfredini frequently references Bernard Herrmann's distinctive PSYCHO theme, and the first viewpoint character introduced by the narrative, a girl named Annie, perishes early in the film just as Marion Crane does in the Hitchcock film.  And most persuasively, the killer assumes the imagined personality of a long-dead relative as protection for the guilt the killer feels over that relation's death.

Further, in place of Carpenter's suggestions regarding the unknowability of evil, Cunningham's figure of evil possesses the same human dimensions as the Norman Bates of both creator Robert Bloch and adapter Alfred Hitchcock.  Scripter Victor Miller has commented that his psycho-killer is in essence "a mother who would have killed for her kids." (At this late date, does anyone not know it's Mrs. Voorhees in Camp Blood with the axe?)  But to be precise, her precious son Jason is long dead, and the 1958 flashback at the film's outset shows that Voorhees has already taken vengeance on the counselors who let her boy perish in the lake.  All of Voorhees' other acts of violence-- burning down the camp a year later, and coming back in 1980 when the owner tries to re-open the property-- are only defenses within her demented mind.  When Voorhees chooses to go after the counselors before Camp Crystal Lake has even opened, at a time when no children are endangered, it's patently clear that she's caught in what Freud would term a "repetition-compulsion."  Unable to come to terms with the painful experience of losing her child, Voorhees must repeat the circumstances of her vengeance over and over, imagining that the new camp counselors deserve the same punishment as those who wronged her.  Only in this way can she imagine Jason being "alive" when he speaks through her, pleading to see her kill his murderers again and again.

Miller's characters are simply drawn, but I don't think any of them are depicted as sex-crazed fools, which would become a dominant trope in FRIDAY's sequels.  The counselors' warnings about the camp all come from disreputable sources: a town "crazy," a surly truckdriver, and an uptight cop.  Cunningham may have chosen to use all of these male characters as "red herrings" for the true killer, to keep the audience's suspicions focused on a male killer until the climax, when Voorhees is belatedly introduced.  In terms of the techniques used for a real mystery-tale, this late introduction would be a failure, but here it supports Cunningham's vaunted theme of the intrusion of the irrational upon ordinary life.  In addition, the DVD commentary for FRIDAY argues persuasively that Alice, the "final girl" here, is not the least bit "virginal," contrary to those critics who assumed that all "final girls" should be, simply because that was the pattern HALLOWEEN set.  Indeed, in one scene it's Alice who proposes that the counselors play "strip poker," so it's clear that she's as randy as everyone else.  At the same time, Cunningham gives the young counselors' sexual endeavors a light-- one might even call it "innocent"-- touch.  The only character who sees their sexuality as evil is Mrs. Voorhees, and even then, she isn't condemning sexuality as such.  In her mind the young people's ability to celebrate their bodies is inextricably linked to their capacity for negligence.

The most mythic moment of FRIDAY was conceived as an addendum to the main script. Famed makeup artist Tom Savini suggested that Alice should have a final "gotcha" dream in which she was attacked by the rotting corpse of the long-dead Jason. On one level, this incident prefigures the fact that when FRIDAY proved successful, Jason would become the new horror-protagonist, Mrs. Voorhees having "lost her head."  But it's unlikely that the filmmakers were thinking of that contingency at the time; the dream of Jason's recrudescence was just one more thrill-ride on the cinematic roller-coaster, one clearly derived from the conclusion of Brian dePalma's CARRIE.

What's fascinating about this sequence is that even though Alice, like all of her friends, is fundamentally innocent, on some level she accepts and internalizes the guilt of Mrs. Voorhees.  Even though she wakes from the dream, she ends the film telling the surrouding officials, with an unshakable conviction, that Jason is "still down there," under the lake, haunting it with his unquiet spirit.  Once he was revived in truth, however, Jason became a very different type of mythic presence-- more accessible, but not necessarily an improvement.
Posted by Gene Phillips at 3:38 PM
Email ThisBlogThis!Share to TwitterShare to FacebookShare to Pinterest
Labels: delirious dreams and fallacious figments (u), perilous psychos (u), the uncanny