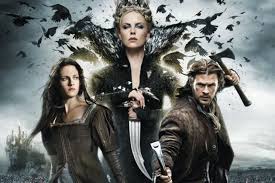 It's tempting to class SNOW WHITE AND THE HUNTSMAN as a "villain-centric" version of the famed fairy tale.  The title makes it sound as if the main focus will be on re-imagining the nature of the relationship between the Snow White of the tale and the minor character of the Huntsman who spares her, thus making possible the heroine's escape from the evil Queen and her sanctuary with the Seven Dwarfs.

Instead, the strongest characterization in HUNTSMAN is neither the lead male (Chris Hemsworth) or the lead female (Kristen Stewart), but the villain, Queen Ravenna (Charlize Theron).  Yet HUNTSMAN is not a deliberate attempt to reconfigure the story to rehabilitate a famous villain, as in Gregory Maguire's 1995 book WICKED, or to re-tell the famous tale from the POV of the villain, as in the 1997 film SNOW WHITE: A TALE OF TERROR.  Although Ravenna is indubitably the most interesting character in HUNTSMAN, she's not the focus of the story as in a truly "villain-centric" narrative.  She's simply built up to operatic heights to give her heroic opponents a foe against whom they have almost no chance.

The essential conflicts which HUNTSMAN takes from the fairy tale are those of youth vs. age, and to a lesser extent female vs. male.  These two concerns blend to form the film's theme, which might best be stated as the unfairness of the male gender for being perpetually attracted to youth/beauty.  HUNTSMAN does not really deal with the theme in any depth, using it solely to provide Ravenna's motivation.

Eric the Huntsman, the most thinly-drawn character of the three, is the one clear exception to Ravenna's imprecations on the male gender. Throughout the film we learn little about the Huntsman's background or personality beyond what is needed for the plot-action.  Rather than being simply the Queen's servant as in the classic folktale, this huntsman is an independent warrior who doesn't wish to serve Her Majesty.  The key aspect of his background that comes to the fore is that he is a widower, as well as the only example of a male character who remains loyal to a woman, his dead wife.  Ravenna manipulates him into serving her by promising (falsely) to reunite him with his lost spouse.  But once Eric learns that Ravenna has lied, he allies himself to Snow White-- originally, for mercenary reasons, a la Han Solo rescuing Leia.  No romance as such develops between Snow and Eric, though the film leaves things ambiguous.  Is Eric attracted to Snow as a woman, thus allowing him to forget his lost wife, or does he simply become the ideal retainer, converted to her service by the power of her regal "innocence?"  Whatever his feelings, at film's end when Snow is crowned queen, the Huntsman simply looks on from the crowd, implicitly separated from her by the social hierarchy-- an atypical outcome compared to most modern-day revisions of fairy tales, where doughty young wights often do gain both princess and throne.


Snow White's character has more flexibility.  As noted she incarnates the virtue of "innocence" as against the sordid "experience" of Ravenna, though it might be asserted that only the good luck of the script keeps Snow from undergoing a fate much like Ravenna's.  In contrast to many modern versions of the character, Kristen Stewart's Snow is not innocent in the sense of being vacuous, lacking any energy to fight for her own life.  She's never an exceptional fighter, despite getting tricked out in armor and trying to kill Ravenna at the climax, but she does try. The thing that allows her to triumph over the sorceress is the power of innocence, which the script compares the power of life itself. Only this can defeat the death-force represented by the Queen.  Such "life-force" gives Snow the ability to discourage at least one forest-denizen, a giant troll, from attacking her and her retainer, and this trope might be regarded as a loose rewriting of the Disney Snow White's ability to charm wildlife.  One can't precisely call Snow's "purity" to be a power as such: she never charms hordes of animals like the Snow White-manqué of 2007's ENCHANTED.  The script, though it never directly references specific religious icons or concepts, seems to be invoking something comparable to the Christian rewrites of pagan myths that we moderns know best from Arthurian stories.  The figure of "the white hart" is one of these that makes an appearance in HUNTSMAN:


...the white hart became a symbol of purity, redemption and good fortune in Scotland, and eventually became an important symbol in English heraldry too, alongside the mythical unicorn whose horn was said to be endowed with magical properties.-- Tales from a Cottage Garden blog.

And since the hart only appears long enough for Snow to charm it, the scene's only purpose seems to be one of comparing the persecuted heroine with this implicit spirit-of-nature.  However, HUNTSMAN doesn't pursue this line of symbolism very far,  Overall Snow has no more development in her character-arc than does the Huntsman; she simply goes from being the persecuted maiden to a queenly figure marshalling her forces to ride against the evil Queen.

It might be argued that the Queen, too, does not appreciably change, but in general it's not in the nature of villains to change; only to suffer a critical reverse.  Still, Ravenna holds the audience's attention because she's the mouthpiece of the theme.  Her early background is also hazy: in one scene in the film's extended version, Ravenna is seen as a pretty little girl, who is about to be abducted by unidentified raiders.  While Ravenna's brother looks on, the children's mother places a spell on the girl insuring that she will always be capable of renewing her youth and beauty through sorcery.

Sorcery also makes possible Ravenna's easy usurpation of the throne of Snow White's father Magnus.  In most versions of the classic story, the king's wife simply dies, and he willingly re-marries.  This re-marriage places Snow White in a difficult position once the king too passes on, which usually takes place in a naturalistic fashion in the tales.

HUNTSMAN's Ravenna takes a shorter route to success.  Apparently Magnus' wife does die naturally, but following that event, Ravenna uses her sorcery to stage a fake attack on herself, so that Magnus can come to her rescue and be ensorcelled by Ravenna's charms.  This duplicity leads to the film's strongest scene, when Magnus attempts to celebrate his wedding-night with his new wife.  Ravenna, after immobilizing Magnus with her power, rants about her previous abuse: "I was ruined by a king like you once... I replaced his queen-- an old woman..."  "Ruin" here implies rape, albeit one presumably sanctioned by a forced marriage.  We don't know what happened to Ravenna's original abuser, but she's clearly chosen to vent her rage on a surrogate, slaying Magnus with a (phallic?) knife, after which she takes over the kingdom with her own forces, commanded by her now-grown brother Finn.  She also locks little Snow White in a tower,  fortuitously keeping her alive until Snow is old enough to challenge Ravenna.  That said, this film largely dispenses with the famed trope of the"beauty contest," focusing rather on the opposition of life and innocence vs. death and experience. Perhaps that's why the "magic mirror" only makes one appearance in HUNTSMAN, unless one counts Ravenna's ability to call up "glass-fragment demons" which she uses first to deceive Magnus, and later to oppose Snow's army.

Ravenna gains considerable audience-sympathy from the revelation of her oppressed past, even though the script emphasizes that she doesn't confine her depredations to the male of the species.  Though she kills a young male rebel not long after securing her rule, it's implied that she oppresses other women to a greater extent with her practice of sucking youth and beauty from them.  During the flight of Snow and Eric, the heroes encounter a community of women who deliberately scar themselves so that Ravenna won't prey upon them.  Though no character explicitly refutes Ravenna's argument about the tyranny of "the male gaze," one may infer that because Ravenna continues renewing herself even after usurping the throne, she has in effect become the thing that she hates.

Still, that may be giving the film-script a little too much credit.  I rate the film's mythicity as "good" because it does assemble a considerable number of myth-tropes, but in many cases the impact of the tropes is muddled.  A comedy-relief version of the Seven Dwarfs, though it provides one or two laughs, takes up too much time and distracts from the central conflict.  Similarly, the introduction of William, Snow's juvenile-boyfriend of sorts, doesn't have much effect on the plot-action except that Ravenna masquerades as William in order to slip Snow the fatal apple.  Like the magic mirror, Snow's temporary death-by-apple seems forced into the framework, as if the writers included it simply because it was expected.

Overall both costume-design and FX provide a visual feast to shore up the slower plot-moments.  In this respect HUNTSMAN far excels the limp, predictable visuals of this year's OZ: THE GREAT AND POWERFUL.

Posted by Gene Phillips at 3:00 PM
Email ThisBlogThis!Share to TwitterShare to FacebookShare to Pinterest
Labels: combative adventures, the marvelous