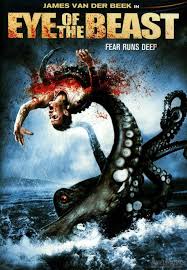 The SYFY Channel is the reverse of the maxim about how "one bad apple don't spoil the barrel."  Even when you get a good movie out of SYFY, they've shown so many embarassingly inferior products that one hesitates to reach into the barrel again.

Still, according to Stephen King fans are intrinsically optimistic, and maybe that's what caused me to check out EYE OF THE BEAST.  On the face of it, it sounds like a thousand other "giant critter" films that have dominated SYFY over the last ten years.  But though EYE isn't anything more than a slightly above-average thriller, at least it doesn't feel like writer Mark Mullin and director Gary Yates simply took assorted elements from JAWS and FRIDAY THE 13TH, mixed them in a blender, and then poured them out on the heads of the unfortunate viewing audiences.

Though all of the actors are given a little more to do than in the typical monster mash-up, the only "name" actor here is James Van Der Beek as an oceanographic expert who comes to the small fishing-community of Fells Island in Canada, seeking to find out what's caused a big drop-off in the available fish.  He meets attractive lady sheriff Katrina, half white and half Indian, who must constantly play referee between the white residents of the town and the local Native Americans, who are in constant competition for the dwindling resources.  Since this is a giant monster flick, it will come as no surprise that there's a humongous squid in the water, eating up all the fish and occasionally grabbing the odd human for an appertif.

It doesn't take long for most viewers to get tired of the repetitive "let's-goof-on-the-silly-monsterflick" attitude seen in, say, the more typical SUPERGATOR and DINOCROC fodder, so by comparison it's fairly refreshing to see Mullin and Yates play their thriller straight.  No one's reinventing the wheel here, but the oceanographer has some credible conflicts with his bosses over the alleged sighting of the squid and Katrina has a deeper conflict than her referee-role: at age seven she saw the squid kill her father, but no one believed her.  Van Der Beek and Alexandra Castillo bring a strong sense of conviction to these basic roles, and in contrast to the dopey humor in most of these creature features, there's just one solid joke in the whole film, which is best entitled "The Nine Reasons Fishing is Better Than Sex."  The only downside is that the big squid isn't given much screen time, but given how bad most of SYFY's CGI-colossi are, I barely noticed. 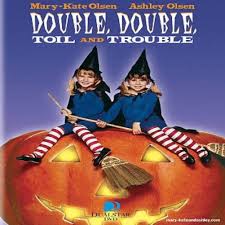 I don't know what exactly possessed me to rewatch DOUBLE, DOUBLE TOIL AND TROUBLE, given that unlike EYE I had seen this telefilm when it was first broadcast, back when the Olsen Twins were riding high as pint-sized celebrities.  On occasion kid-oriented comedies may have interesting myth-motifs, but DOUBLE has nothing to offer in that regard.  It's a straightforward vehicle for the Twins, so if a viewer-- most likely a juvenile viewer-- likes them, that viewer will probably like this routine fantasy in which the two adorable little girls save their parents from the poorhouse by freeing their aunt from a mystical prison.  The aunt, played by Chloris Leachman, was placed in a mirror by her twin sister (also Leachman), and both are witches of some sort.  Since the little-girl twins have a tiny amount of conflict about being twins, it's fair to state that the element of the adult witch-twins having a falling-out is meant to reflect back on the children's conflict.  But that's all the symbolism as that this weary, simplistic plot can muster.

The appeal of the Olsen Twins eludes me, but the telefilm does feature some good performers in addition to Leachman, principally midget Phil Fondacaro of TROLL and Meschach Taylor as two adults who help the kids.  But even though TV journeyman scripter Jurgen Wolff will never read this review-- and even though I consider myself one of the least politically correct persons on the web-- I still find myself saying to Wolff, "You had to nickname Taylor's character 'Mister N?'  Twenty-five other letters in the English alphabet, and he just had to have a name starting with THAT letter?"

Posted by Gene Phillips at 2:39 PM
Email ThisBlogThis!Share to TwitterShare to FacebookShare to Pinterest
Labels: the marvelous