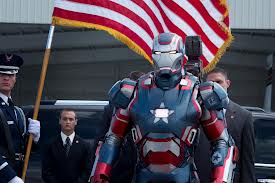 
I didn't have much to write about IRON MAN 3 when it first came out, since it was easily the least impressive of the Armored Avenger's three outings.  But this weekend's viewing of THE WOLVERINE gives me a new take on the "wrong way" and "right way" of current Hollywood's rendering of franchise superheroes.

From the POV of a longtime comics-reader, Hollywood has improved mightily since the days of such dubious gems as the 1977 SPIDER-MAN teleseries.  In earlier decades most live-action film and television adaptations of comics properties showed a cheery indifference to the original stories.


The success of the 1989 BATMAN, freewheeling as it was, validated the eclectic approach of its scriptwriters, borrowing what worked in the original stories and crossbreeding those elements with the standard Hollywood format of the "big loud action picture."

That said, it's not hard to find examples where Hollywood scripters made only token efforts toward adapting original comics-stories.  For instance, both FANTASTIC FOUR films reduce the stories they adapt into a dumb-show of meaningless plot-points.  The 2008 IRON MAN pumped new life into the genre, finding a clever way to update the themes implicit in Iron Man's origin-story for the internet generation.  The second film was considerably less insightful, but some of its best moments stemmed from the script's take on the "Tony Stark, alcoholic" storyline. 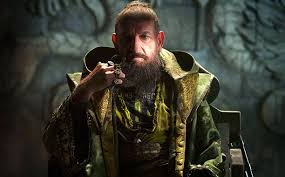 Though some of the early publicity for IRON MAN 3 touted the presence of the Mandarin as the film's villain, the scripters of IRON MAN 3 probably congratulated themselves on producing a witty "deconstruction" of Iron Man's Asiatic antagonist.  To justify the SPOILERS above: there is no real Mandarin; he's an actor hired to project a phony, Osama-like presence as a superterrorist.  I have not read the 2005-06 IRON MAN "Extrenus" story-arc, so I can't say how closely the film hews to that original, but in this film the villain behind the phony Mandarin proves to be little more than "Wolverine crossed with the Human Torch."  It might be impossible to render a "yellow peril" menace like the original Mandarin for modern audiences, but the poor excuse for a major villain here shows contempt not just for the original stories, but for the superhero genre as well.

Similarly, IRON MAN 3 is the first film in which the hero perfects a new and showy ability to have parts of his armor automatically fit themselves upon his body from afar.  Call me old-fashioned, but I like a hero who presents a somewhat stable appearance and set of powers when he takes arm against a sea of troubles.  As if to mirror this disintegration of the iconic status of Iron Man, Tony Stark has yet another twitchy mental breakdown.  He also whips up a small army of robotic Iron Men and in a pinch causes his flying armor-sections to engirdle fiancee Pepper for purposes of protection, rather than following the tried-and-true "heroic rescue."

I might approve these assaults on iconicity if IRON MAN 3 was a satire on superheroes. But in a film that's selling the excitements of superhero action, they add up to nothing more than Hollywood hackwork. 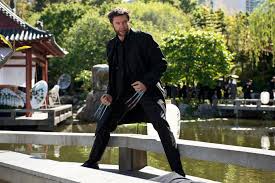 WOLVERINE, however, is more like the original IRON MAN than either of the armored sequels, in that it chooses eclectically from assorted "Wolverine" and "X-Men" stories, but rearranges their elements to produce a vivid new story.  Characters like Viper, the Silver Samurai, Yukio and Mariko Yashida are all altered radically from their comic-book versions, but thanks to the script's sensitive treatment they acquire as much or more symbolic resonance as they had in the comic books.

One major alteration is that whereas the comics-Wolverine was, in the course of his evolution, given an extensive acquaintance with the culture of Japan, Hugh Jackman's Wolverine's first (and superficial) encounter takes place in World War II, where he saves Japanese soldier Yashida from the atomic blast of Nagasaki.  Many years later, Wolverine is summoned to Japan by the same man, now old and dying of cancer.  Though the hero is still suffering bouts of survivor guilt due to being forced to kill the berserk Jean Grey/Phoenix, he agrees to follow the gamine-like Japanese psychic Yukio to Japan.

I won't give away further elements of the plot, but suffice to say that Wolverine is drawn into the expected conflict involving both a plot to kidnap (or kill) Mariko Yashida, heir to the Yashida fortune, and a plot to drain Wolverine of his "healing factor" and the concomitant-but-unwanted immortality it confers upon the hero.

While I'm not of the critical persuasion that believes that stories must be essentially "realistic" to be good, it's something of a plus that one can imagine some elements of the story transpiring without the fantastic devices, much as if someone had tried to make a modern version of Samuel Fuller's 1955 Japanese noir HOUSE OF BAMBOO.  And that's not to say that there aren't a few dubious plot-points in WOLVERINE.  However, whereas IRON MAN 3 simply lets its plot-holes flap in the wind with lofty indifference, director James Mangold and his scripters paper over the (minor) cracks with a studious attention to character interactions-- particularly those between Wolverine and his destined paramour Mariko.  The contrast between the raffishness of Wolverine (Mariko calls the shaggy-looking hero a "caveman" when she first sees him) and the elaborate customs of Japan is one that Mangold plays to good effect.  In addition, the action set-pieces-- at least one of which is clearly borrowed from the Claremont/Miller WOLVERINE graphic novel series-- are fluidly realized.  WOLVERINE is one of the few films I've seen that manages to use "shakicam" techniques to convey thrills rather than to call attention to the "artiness" of the diegesis.

In contrast to the overblown X-MEN ORIGINS: WOLVERINE, this movie deserves to be regarded as the definitive Logan film to which any further entries in the franchise should aspire.  That said, the closing "teaser" suggests a future project that will allow for a more X-tensive X-pansion of mutant heroics.

Posted by Gene Phillips at 5:48 PM
Email ThisBlogThis!Share to TwitterShare to FacebookShare to Pinterest
Labels: combative adventures, the marvelous