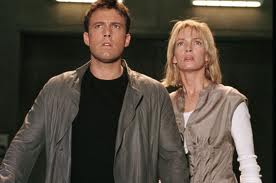 Continuing my attempts to suss out the multifarous ways in which the works of Philip K. Dick have been adapted to film, I arrive next at PAYCHECK, scripted by Dean Georgaris and directed by John Woo.  Woo and Georgaris choose to channel Dick through Alfred Hitchcock, albeit a Hitchcock beefed with a lot more car-chases and physical fights.  The results are not totally unpleasing, since both Dick and Hitchcock were masters of anxiety, but the script unfortunately fails to deliver on its potential.

Without dwelling too long on the 1953 Dick short story of the same name, it's actually one of Philip Dick's least anxiety-filled short stories.  Central character "Jennings" is an engineer who takes an assignment to work on a secret project: in return for a fabulous paycheck, he agrees to have his memory wiped clean of everything that happened during his employment by the project.  To his surprise, Jennings' paycheck is an envelope full of various value-less items.  However, over time Jennings finds that these items all place a vital role in his survival.  He eventually deduces that he has had recourse to a time-piercing device, allowing him to send his to his past self the very items he would need to survive.  The conclusion is more upbeat than a majority of Dick stories, in that Jennings's reward for his investigations takes him from being a simple employee, a cog in a corporate machine, to partnership in the secret project and marriage to the boss's daughter.

Whereas the Dick story deals in part with a time-device that can literally "scoop" objects from one period to another, in the movie the device only allows individuals to see their futures.  But it isn't just one company that pays the protagonist-- given the full name "Michael Jennings" here-- to have his memory erased after his work for them. Rather, in Jennings's era it's standard practice for many companies when dealing with outside talents.  The viewer sees Jennings go through the mind-wiping procedure once on a minor job before he even signs up for the assignment vital to the main plot.

While the character of the short story is largely a cipher, Georgaris makes a partial attempt to give this Jennings (Ben Affleck) a consistent character.  This Jennings is something of a "player."  He wants a big paycheck to pay for his expensive tastes, and is willing to sacrifice his memories because he believes that only life's "highlights" are important.  When he meets female lead Rachel Porter (Uma Thurman) at a party, and feels a genuine erotic spark between them, he invites her, in all sincerity, simply to have quickie sex with him, since he considers the game of courtship a waste of time.  Rachel demurs, and shortly later, Jennings agrees to an engineering assignment lasting three years.  However, thanks to the mind-wipe he loses those years, and on top of that, is rewarded not with the sizeable paycheck he expected, but an envelope full of seemingly useless items.

As in the short story, Jennings is then pursued by the law, who want more information about the secret project, and who are none too gentle in trying to probe his wiped memory.  Since this  film portrays the future cops shows them as having no restraints on their inquiries, one may wonder if the writer had the 2001 Patriot Act in mind when he wrote this scene-- though, in contrast to the Dick story, the cops are shown as redeemable at the end of the Woo film.  After Jennings escapes from the cops through the use of some of his "value-less" items, he begins to seek answers.  And one of the people who ends up helping him is Rachel, who just happens to be a biologist working for the same company.

The strongest gimmick in the film is its borrowing from Dick: though Georgaris changes the particular items in the protagonist's "paycheck" in order with a very different route to the truth, the film is most challenging in providing the context for all of these foreordained items. However, the addition of the action-heavy "set-pieces" detracts from the mystery this time.  I won't say, like the more elitist critics, that the addition of heavy action is automatically a minus.  Frankly, I like the 1990 TOTAL RECALL better than the rather dull Dick story on which it's based.  But this time, the set-pieces seem de rigeur, as if John Woo felt that he had to serve up a certain number of them to please "the John Woo audience."

Georgaris' early script is set up to show early Jennings the error of his ways: to reveal to him the importance of love.  He experiences with Rachel during his employment at the project, but though he loses that memory, he recovers the emotion through his re-alliance with her.  He also comes to realize that the time-device which he reverse-engineered into working status is morally wrong; that it leeches away humankind's ability to regard the future with fresh eyes.  These are interesting themes not present in the Dick short story.  Unfortunately, Georgaris doesn't manage to sell Jennings's transformation.  In contrast to the example of Hitchcock's films, whose writers could suggest a multifaceted background through a few well-chosen sentences, Jennings is too flat in the beginning to create any conviction in a personality capable of such transformation, and Rachel is no better.

The action-elements also create another disharmony.  It's just barely believable that this version of Jennings, despite his engineer background, can prove competent running around doing action-stunts, since an early scene depicts him practicing martial arts with a bo-staff.  But the film also shows biologist Rachel doing stunts almost as outrageous, and makes no attempt to provide an explanation, unless one should think it's "the power of love" at work.

Since the film does have a strong protagonist and a strong villain, I considered that it might be deemed an adventure.  But on consideration, I found that the conflict between these two characters was of less significance than the dramatic love-affair between Jennings and Rachel; ergo, I rate PAYCHECK as a combative drama.

Posted by Gene Phillips at 2:15 PM
Email ThisBlogThis!Share to TwitterShare to FacebookShare to Pinterest
Labels: combative dramas, the marvelous