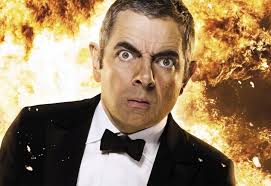 The two JOHNNY ENGLISH films-- spawned from a series of commercials featuring British comedy-star Rowan Atkinson-- will never be lauded as the finest comedies, or even the best spoofs of the spy-genre.  But they certainly give me a run for my analytic money in terms of figuring out their phenomenality and their relation to my concept of the combative mode.

The first film-- which I'll call ENGLISH for short-- features Atkinson as Johnny English, a member of the spy-organization "MI-7."  Like the cinematic version of the teleseries "Get Smart," English is a daydreamer who imagines himself in James Bond-like situations but is actually a low-level agent with no experience in the field and no competence whatsoever.  Unlike the GET SMART movie, which invoked the Bondian trope of "spy-gimmicks," ENGLISH barely even references the idea that MI-7's spies have such trinkets at their disposal.  In addition, unlike Maxwell Smart Johnny English shows no ability in terms of fighting or shooting.  Since the film lacks a hero with spectacular dynamicity, it can only rate as subcombative.

ENGLISH's villain Pascal Sauvage (John Malkovich) provides a much stronger connection to another Bond-trope: the idea of the plotter who comes up with a "bizarre crime" that goes beyond the normal limits of ordinary criminality.  In the finished film Sauvage doesn't have any uncanny or marvelous resources-- just a bunch of gun-toting henchmen-- but his plot is rather clever.  By stealing the Crown Jewels of England, he sets off a chain of events that will culminate in his ascension to the throne of Great Britain.  Once he has absolute authority over the British Isles, he plans to turn them into a vast penal colony, to which the rest of the world can send their hardened criminals.  It's a silly idea, and yet-- perhaps because Sauvage's French background is stressed-- it does carry a certain resonance.  Maybe it's because England's history includes a period in which it transported a goodly number of criminals to Australia.

Malkovich makes a good smarmy villain, constantly amused by English's bumbling attempts to bring him to justice.  But aside from one scene that suggests that English may have some buried fighting-ability, the would-be agent shows no ability to do anything but constantly embarass himself before huge crowds of people-- which, as it happens, was the dominant schtick Atkinson practiced in his "Mister Bean" teleseries.  A little of this routine goes a long way, and ENGLISH overdoes it by more than half.  Even with the clever premise of Sauvage's master plan, too much of the film seems like setups for Atkinson's antics.

A side-note: I said that "in the finished film" the villain only had henchmen at his command.  However, the DVD's deleted scenes include two instances where Sauvage executes two victims in a clever manner: ushering them into an elevator whose walls are lined with flamethrowers-- flamethrowers so hot that they can reduce a man to ashes in minutes.  But since I rate this as "uncanny," the device wouldn't have changed the film's phenomenality had it been included in the completed flick.

Although JOHNNY ENGLISH REBORN includes three of the four writers who worked on the first film, REBORN is a much tighter spoof on the superspy genre, without omitting Atkinson's signature screwups.  The enemy this time is an organization of assassins called "Vortex," and it utilizes an outright marvelous device-- a mind-control drug that can force anyone to become a killer.  In addition, English gets to use quite a few marvelous devices, such as a motorized wheelchair with a gun in its body, and a missile-launching umbrella.

But the biggest change is that in the interim between the two films, Johnny English becomes a master of armed and unarmed combat.  In the first film he's an incompetent after the model of Inspector Clouseau, but in the second, he has hewed closer to Maxwell Smart-- which is not to say that he doesn't still use his skills in comic fashion.  For instance, his martial training in Tibet involves building up his resistance to pain by having his genitals repeatedly smashed-- which, as it happens, does prove to be a useful talent to have at the film's climax.

Another improvement is that one of the villains is a virtual clone of James Bond, a good-looking agent named Simon.  A similar figure appeared in the first film, only to be knocked off immediately, but this time the simulacrum of Bond is a direct opponent to English, who remains to some extent still a "Bond manque."  Simon even has a tradition of stealing English's girlfriends, which helps to personalize the relationship when the villain's perfidy is revealed.

The film makes far more ingenious use of stuntwork, thus paralleling and sending up that aspect of the superspy genre, particularly a chase involving cars chasing the motorized wheelchair.  Atkinson's physical stuntwork is improved as well, particularly in a scene toward the end where he has to "fight himself" while under control of the mind-control drug.

Both films, incidentally, are well served with glamorous female agents.  Even here, ENGLISH just has one major babe, while REBORN has two.

Posted by Gene Phillips at 2:35 PM
Email ThisBlogThis!Share to TwitterShare to FacebookShare to Pinterest
Labels: bizarre crimes and crimefighting (u), combative comedies, diabolical devices (u), the marvelous, the uncanny