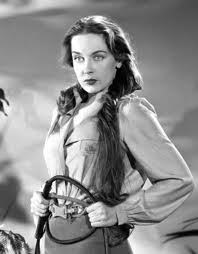 
For the second-to-last Weismuller Tarzan, the series provides another sociological oscillation.  Right on the heels of LEOPARD WOMAN, with its championing of civilization's benefits, TARZAN AND THE HUNTRESS offers another critique of civilization's evils.

Unfortunately, HUNTRESS is one of the more routine Tarzan entries, seemingly serving as a template for many episodes of the later "Bomba" and "Jungle Jim" serials.  Titular huntress Tanya Rawlins (Patricia Morison) heads an expedition to an unnamed country ruled by one King Ferrod, whose people all have a vague "Arab-Polynesian" look to them, now standard in Tarzan films in this period. Tanya's purpose is to gather animals to sell to the zoos in the civilized world.  Tarzan encounters the animal-hunters and it's hate at first sight; he wants them out of his jungle, pronto.  King Ferrod isn't as much of a hard-liner: he'll allow the white hunters to trap two animals, one male and one female, to take back with them.

Tanya isn't the main villain here, though: she's more like the "enabler" who allows real villainy to serve her purposes.  To get around King Ferrod's ruling, Tanya's cruel trail boss Weir conspires with Ferrod's nephew.  Weir and his men shoot Ferrod and his son so that the nephew can take over the throne; then the nephew allows the hunters to plunder all the animals they want.  In a more politicized context it would be a pretty good metaphor for colonial relationships to the colonized: not so much "dollar diplomacy" as "death diplomacy."

Tarzan smells a rat and summons the animals away from the hunters in what is easily the film's best scene.  Eventually the ape man, Cheetah and Boy steal all the guns from the hunters' camp, putting them at the mercy of the jungle they wished to despoil.  Tanya tries to use her charms on Tarzan to make him relent, but it's no sale.  However, that mischievious monkey Cheetah accidentally leads the villains to their guns again, and so the game begins again.  Tarzan finds Ferrod's son, who has survived the assassination attempt, and eventually calls down a herd of elephants to stomp the hunters' camp.  In keeping with the rules of jungle etiquette, Tanya manages to escape the chaos with only a pilot to fly her plane.  A much better reprise of the essential plot appears in 1953's TARZAN AND THE SHE-DEVIL, in particular because it gives more time to Jane, who barely has anything to do in HUNTRESS.  This was also the last outing for Johnny Sheffield's Boy.  His character disappeared from the series when he left to do the BOMBA films, and though later Tarzan films occasionally brought in juvenile sidekicks for the ape man, none of them stuck, though a regular kid-friend did appear in the 1960s Tarzan teleseries. 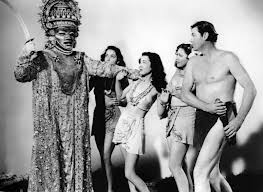 Fittingly for Weismuller's final performance as the ape man, TARZAN AND THE MERMAIDS revolves around lots and lots of swimming, thanks to the "Aquaticans,"  who inhabit a secluded island-civilization.  The females are styled "mermaids" because they swim, swim, and then swim some more; the male Aquaticans swim no less but no one bothers to call them "mermen."  The former Olympic swimmer gets a chance to show off his stuff as well, though Weismuller didn't perform the memorable high dive toward the film's end.  In fact, the stuntman made the dive successfully but was killed by the crashing waves.

In comparison to the previous outing, MERMAIDS displays some admirable sets and some enjoyable natural settings, filmed in the vicinity of Acapulco.  Unfortunately, the script is extremely thin, revolving around the attempt of evil high priest Palanth (George Zucco) and his assistant Varga to exploit the Aquaticans.  Their main purpose is to loot pearls from the naive natives, who have no understanding of the pearls' value in the outside world.  But for some obscure reason the two schemers think that the only way to properly maintain their power is to demand young maidens to be married to the god Balu, who is impersonated in a fancy regalia by Varga.

As it happens, this god-routine backfires on the villains.  Balu's newest bride-to-be Mara is in love with a young man of her own people, so she runs off (swims off, actually) and ends up on Tarzan's doorstep.  Some Aquaticans loyal to Balu pursue Mara. Tarzan fights them but they manage to abduct Mara and return her to their hidden domain.  For a change Boy is said to be off in England at school-- usually, it was Jane who got shuttled off-- so Jane actually accompanies Tarzan on his rescue mission.  Unfortunately, though Jane goes along she still gets nothing to do in the story, beyond being captured and threatened by Palanth's stooges.

The sociological motif here was pretty old-hat even by 1948's standards: that of the evil high priest who can dumbfound his simple people with the most piddling deception.  Mara, played by Linda Christian, is very pretty but there's never any real concern in the script for her "fate worse than death," and her male suitor is negligible.  Tarzan does get one change of pace in fighting an octopus in the sea, but his final confrontation with the two villains is flat and unimpressive.
Posted by Gene Phillips at 2:01 PM
Email ThisBlogThis!Share to TwitterShare to FacebookShare to Pinterest
Labels: exotic lands and customs (u), outre outfits (u), superlative skills (u), the uncanny