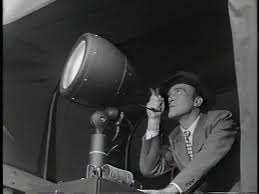 
THE INVISIBLE MONSTER's charms are pretty, well, invisible to me.  It's a by-the-numbers serial in which a master criminal plans to conquer the world, and gets stopped by some intrepid investigators.  In this case, the villain calls himself "the Phantom Ruler"-- no other name is given-- and he's perfected a way to make himself invisible, as long as he wears an outfit treated with his special "invisible paint."  He plans to form an "invisible army" to conquer America, but he has limited resources.  Aside from his two main henchmen, he begins to gather resources through a metaphorical "invisible army"-- that is, he brings illegal European immigrants into the U.S., and creates new identities for them, through which they can plunder the elements he needs.

The first episode creates a moderate amount of sympathy for the immigrants; they all claim that they don't want to commit crimes, but when the Ruler threatens to send them back to their homelands, they immediately fall into line.  One wonders what kind of hellscape the writers thought postwar Europe was-- or was it a covert shot at the Communist parts of Europe?  However, though early episodes focus on the way the immigrants perform the Ruler's tasks, they're later de-emphasized in favor of the two henchmen and their running battles with two insurance investigators, Lane Carson and Carol Richards.

I doubt that any insurance investigators ever ran around fighting crimes as these two do; it's surprising that the writers didn't just make them FBI agents or the like.  Richard Webb plays Carson as a standard serial-hero, with no individual touches except that in the first episode he gets his back up a little when go-getter Richards (Aline Towne) shows off her own investigative skills.  However, the gender imbalance quickly corrects itself.  Though Ms. Richards shows herself able to fire a pistol, she never gets to shoot any of the villains, and Carson handles all the fights by himself.  At the serial's end, when the two heroes are regarding the lamp with which the villain made himself invisible, Carson makes a weird remark about how she could have a great "nightclub act" by using the lamp. Was this his way of saying she ought to make her clothes invisible?  But she does get the last word in the story, saying that she'll just stick with her regular job.

The lamp is the most risible element of the serial, though it's not used very often.  Apparently the writers thought that a villain who could become invisible any time he wanted gave him too much power.  Whenever the Phantom Ruler goes forth to plunder some warehouse, his henchmen have to shine a lamp on him from a waiting truck, or he won't be invisible.  I'd like to say that the serial was more enjoyable for this daffy conceit, but it doesn't add anything.  The best aspect of INVISIBLE MONSTER are the professionally crafted fight-scenes, though even in this regard Republic had seen better days.