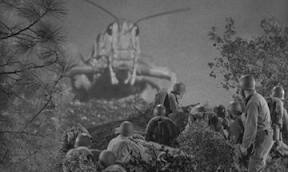 BEGINNING OF THE END remains one of the most famous Bert I. Gordon monster-films.  I believe that it holds this reputation largely on the infamy of the special effects, in that no one past very young childhood can sustain much conviction in the use of rear projection and split-screens to place real, tiny grasshoppers in the same frames with normal-sized humans or huge buildings.  Precisely because the effects are so transparently unconvincing, I speculate that END has remained popular because it's sort of an "dopey kid" of which one becomes fond.  Personally I find more charm in Gordon's previous films THE AMAZING COLOSSAL MAN and THE CYCLOPS, both of which offer more developed stories than END.

The progress by which the protagonists, photojournalist Audrey (Peggie Castle) and experimental scientist Wainwright (Peter Graves), discover the presence of the giant locusts is put forth in a desultory, unexciting manner.  Wainwright discovers that he is indirectly the cause of the locusts' gigantism, thanks to the insects having partaken of wheat he subjected to radioactivity, but the script gives the scientist no moments of regret about his role in the destruction.  The closest the film comes to a grim moment occurs when the big bugs have invaded Chicago, and the US military considers dropping an atomic bomb on Chi-Town to exterminate the pests.  But here too the drama of the situation seems weak at best.  The most I can say for the script by Lester Gorn and Fred Freiberger-- the latter notorious for his production-work on teleseries like STAR TREK and SPACE:1999-- is that occasionally the writers threw in some apocalyptic-sounding phrase about the beasts inheriting the Earth, or the like.  However, none of these have any cumulate effect.

Since the effects are too poor to create the quality of spectacular violence, the grasshoppers' encounters with the gyrenes result only in functional violence, so that this is merely a subcombative work despite all the shooting and the sonic-beam that plays "Pied Piper" to the bugs at the climax.
Posted by Gene Phillips at 4:02 PM
Email ThisBlogThis!Share to TwitterShare to FacebookShare to Pinterest
Labels: the marvelous