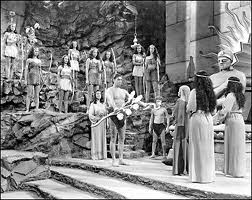 TARZAN AND THE AMAZONS, Johnny Weismuller's ninth outing as Tarzan, is my favorite in the RKO Tarzan series.  I'm aware that the series was recycling many familiar motifs by that time, but the script gives them solid treatment, with the only flaw being the overuse of comic-relief chimp Cheetah.

Many Tarzan films, beginning with the "elephants' graveyard" plotline of 1932's TARZAN THE APE MAN, celebrate the wonders of the jungle and attempt to keep out the blundering and/or avaricious invasions of white Americans and Europeans.  AMAZONS, though, is one of the few to blend that familiar plotline with a character conflict between jungle-lord Tarzan-- the stanchest representative of jungle-isolationism-- and his wife and adopted son, both of whom lust after the fascinations of civilized life.

Tarzan and adopted son Boy are first seen enjoying the idyllic life of the jungle while Jane is away, visiting relatives in Europe.  Boy is seen to have a certain adolescent curiosity about his mother's world, but Tarzan only loves the jungle.  During a hunting-expedition, the two males come across a strange Caucasian woman being attacked by a panther.  Tarzan saves the woman, name of "Athena," from the beast, and reveals that she is a citizen of a hidden, Amazon-ruled land called "Palmyria."  Tarzan takes her back to her land, but orders Boy to stay behind.  The curious juvenile follows, however, learning the hidden route by which one can reach Palmyria.

When Tarzan returns Athena to her home, the Amazon Queen chides her for having endangered her people by venturing forth.  Athena pleads that the devil Curiosity made her do it.  The Queen orders Athena to ask forgiveness of their sun-god.  Then, though many of the other amazons seem suspicious of Tarzan's presence, the Queen vouches for his trustworthiness, and Tarzan departs.

Jane returns to meet with her husband and child, but a small party of explorers follows her. Its leader wishes to make contact with primitive tribes, while one of his subordinates is merely a ruthless treasure-hunter.  The explorers come across a bracelet dropped by Athena and picked up by Cheetah (who sometimes functions to do the more egregiously foolish things not appropriate for Boy).  The explorers petition Tarzan to be led to Palmyria.  Tarzan refuses, but his wife and child, who have formed a liking for the expedition's leader, feel slighted because Tarzan will not oblige them.  One of the explorers finds out that Boy also knows the way, and the explorers successfully enters Palmyria.  However, the Amazons take them prisoner.  They refuse to let the white men leave for fear of having their secrets exposed, but spare their lives, intending to keep them prisoner forever, including Boy.

Naturally, the bad white man in the group takes the lead in looting the Amazons' treasures and attempting to escape.  The Amazons give pursuit, and manage to kill all but the worst two.  However, Tarzan comes looking for Boy, and encounters the thieves.  He backs them into quicksand but saves their loot.  He returns the treasures to Palmyria in time to save Boy from a sacrificial death, and the jungle family is reunited, Boy and Jane somewhat wiser about the treachery of the civilized world-- at least, until another film needs them to do the same thing all over again.

The most interesting aspect of AMAZONS is that it's extremely tolerant of the Amazons' culture, given that it's both pagan and matriarchal.  True, the film loads the deck by not saying much about the men in the matriarchal culture, who are briefly depicted as laboring in the mines.  And it must be admitted that this amazon culture is not an attempt to explore what a matriarchal society would be like,  Rather, it's first and foremost an excuse to show off a lot of scantily-clad babes.  Only one Amazon in Palmyria-- the aged Queen, played by Maria Ouspenskaya-- is something other than a hottie-- and in keeping with most jungle-sagas about hidden cities, they're all Caucasian.  Nevertheless, the film's attitude toward the Palmyrians asserts that they have the right to be whatever they wish to be, as opposed to the more reform-minded jungle-films, devoted to changing African cultures in line with European preferences.

Posted by Gene Phillips at 2:57 PM
Email ThisBlogThis!Share to TwitterShare to FacebookShare to Pinterest
Labels: exotic lands and customs (u), outre outfits (u), superlative skills (u), the uncanny