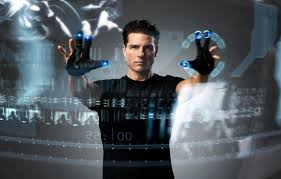 In this essay I asked the question: "what about Philip K. Dick's anxiety-filled, vaguely schizophrenic works has made them so amenable to adaptation into huge, spectacular SF-adventure thrillers?"  I came to the conclusion that Dick's ability to generate narrative anxiety, usually in the form of comparatively sudbued thrillers, was the key.  Big-budget films like 2002's MINORITY REPORT need anxiety to keep the plot boiling, and Dick's 1956 short story of that name certainly has anxiety, though it's a comparatively simple story for Dick.

Dick makes an odd match with famed director Steven Spielberg.  The popular-- though inaccurate-- canard against Spielberg is that he is a "cheerjerker;" that he continually works on films that allow for an easy identification with staunch heroes like Indiana Jones or sentimental protagonists like Elliott of "E.T."  I don't agree with this.  Spielberg has certainly worked with some lightweight material, but neither "E.T." nor "Raiders of the Lost Ark" are without emotional shadings.  It may be fairly argued that Spielberg tends to produce upbeat conclusions to his works.  But though Dick is most often seen conjuring forth pessimistic dystopic worlds, as it happens "Minority Report" concludes on one of his more positive moments.

The short story simply puts forth a very basic idea: that of "Precrime," a futuristic law-enforcement organization devoted to using psychics to head off crimes before they happen.  Precrime administrator John Anderton, despite using a trio of psychics to reveal the future, seems doomed to fall victim to time in another sense: he fears being replaced by another man in both his professional life and in his relationship with his wife because the other fellow is much younger than 50-something Anderton. Then the psychics who foretell the destined crimes then place the X-mark on Anderton himself, claiming that the administrator himself is destined to murder a man he does not know.  After various exploits Anderton exposes a conspiracy to frame him, as well as learning that the three psychics are not unanimous in their forecasts: that it's possible for one of them to produce a "minority report" that differs from the others. This opens up the possibility that the future is not fixed in stone; that there may be multiple time-paths.  Anderton manages to foil the conspiracy and prevent the invalidation of the Precrime unit.

In Spielberg's film Anderton is portrayed by dashing 40-year-old Tom Cruise, so the idea of the character being haunted by fears of replacement proves a non-starter.  In its place Spielberg's scripters introduce a different form of "lost youth:" this Anderton mourns the loss of his elementary-school-aged son to a predator years ago.  This unsolved crime strongly motivates Anderton to defend the system of Precrime, giving him a much more "heroic" reason to defend the system against a conspiracy.  In addition, the Precrime system at this point is confined only to the city of Washington, D.C., though Anderton and his mentor Director Burgess wish to see Precrime become a phenomenon throughout the entire United States.

Then, as in the story, the three psychics predict that Anderton will kill a man he does not know, and Anderton tries to conceal the prediction until he can figure out what's going on.  I'll pass over the particulars of the hero's peregrinations, but he comes close to committing the murder when he thinks that his victim is the man who kidnapped and killed his lost son.  But this too proves to be a deception, and Anderton's only hope to save himself from imprisonment is to make public the dubiousness of Precrime's dependence on psychics who are not so infallible.

The greatest strength of MINORITY REPORT is that Spielberg does a superb job of picturing a near-future science-fiction world-- oddly enough, by drawing on the aesthetic of films noirs.  Even though REPORT shows such wonders as automated cars and police who wear jet-packs, they're given a grundgy realism by Spielberg's use of a process called "bleach-bypassing," which washes out color in the film-negative.  One might almost call REPORT a "film blanc," since so much of Anderton's world seems a leprous shade of white.  Another innovation, attributed to Spielberg in the DVD commentary, was the concept of a computer operation working through "gestural interface" (seen above) rather than through toggles and joysticks.  Six years later, IRON MAN would build on the imagistic richness of this visual approach.

For the first three-fourths of the film, REPORT is a solid thriller with strong dystopic elements.  Though this Anderton is much more of a "hero" than Dick's character, REPORT is more restrained than other Dick-derived films like BLADE RUNNER and TOTAL RECALL: the hero doesn't even have a final battle with the main villain, so that REPORT does not conform to the mode I call "combative."  Thus Spielberg does follow the model of the films noirs more closely, as to some extent Philip Dick may have.  The one downside is that in the final fourth of the film, Anderton is captured and imprisoned by the Washington police.  At this point the film loses its tension and doesn't get it back even after Anderton's wife rather improbably comes to his rescue and breaks him out.  It doesn't help that the chief conspirator clumsily exposes himself, which strikes me as an "easy out" for the scriptwriters.  In addition, although the script introduces a coterie of colorful characters, many of them are just "curiosities" and don't enhance the serious themes of the script.  In the end, it's ironic that the prose-Anderton is willing to see Precrime destroyed, but ends up preserving it, while the film-Anderton is devoted to preserving the system but ends up by undoing it.

ADDENDA: After finishing the review it occured to me to respond to the hype that claimed that this film dealt with the conflict between "free will and determinism."  Though Spielberg and his scripters play around with the concept, they don't really evoke the ontological and emotional issues that arise from the conflict.  To be sure, neither does the original Philip Dick story, if only because it's too short to delve into such matters.  Several Philip Dick novels, including UBIK, MARTIAN TIME-SLIP, and THE MAN IN THE HIGH CASTLE, are far better vehicles for such complexities.  I've not seen any evidence that the filmmaker Spielberg cares about such issues, though.  The strength of MINORITY REPORT lies  not in any intellectual issues, but in its expressive rendition of a futuristic cityscape, which wonderfully recaptures the sterile glory of Lang's METROPOLIS even though the plot-action is closer to that of the far grundgier BLADE RUNNER.

Posted by Gene Phillips at 3:15 PM
Email ThisBlogThis!Share to TwitterShare to FacebookShare to Pinterest
Labels: the marvelous