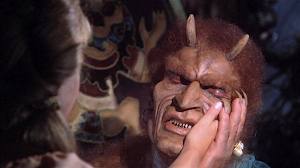 
In my review of the 2010 CLASH OF THE TITANS, I said that the 1981 CLASH, the last cinematic work of Ray Harryhausen, was "my least favorite of Harryhausen's otherworldly-fantasy films."  I also stated that it didn't have as strong a theme as the earlier JASON AND THE ARGONAUTS, which as it happens was also written by the scripter of CLASH, Beverley Cross.  But thanks to my most recent re-viewing of the 1981 film, I've changed my mind.

I still don't think the theme of CLASH is as well organized as that of JASON (reviewed here).  However, I do see vivid symbolic elements in CLASH that I didn't appreciate the first time around, and which raise the film far above, say, Harryhausen's final "Sinbad" film.  Other flaws are present: the scenes with the two-headed dog Dioskilos and the giant scorpions slow down the film's pace without contributing to the dominant sense of wonder.  Romantic leads Harry Hamlin and Judi Bowker lack charisma, and the writer did himself no favors by emulating the popularity of the STAR WARS character "R2-D2" with the use of the mechanical owl Bubo.    But where these may have annoyed me a lot more back in 1981, they seem like minor problems now, and I now find CLASH to be a fitting conclusion to Harryhausen's wonder-working career.

The essential change scripter Cross made to the original Perseus myth was to make it a sexual conflict between Perseus and his enemy Calibos for the hand of the heroine Andromeda.  In some versions of the Perseus story, the hero has a brief contest with an Andromeda-suitor named Phineas, but it's a very short-lived conflict; Perseus simply unveils the head of Medusa and turns the bellicose suitor to stone. This minor conflict becomes the center of the 1981 film, whereas the two "father vs. son" conflicts most important to the original myth-- the prophecy that Perseus will slay his grandfather Acrisius, and the attempt of the hero's adoptive uncle to send the young hero to his death-- are minimized in the first case and elided in the second.

Acrisius-- who will be made into a god-hating tyrant in the 2010 remake-- is much like Pelias in JASON; a violent man who tries to use religion to justify his acts.  Acrisius, angry that his daughter Danae slept with Zeus and bore from him the infant Perseus, sets both of them adrift at sea, claiming to be justified by godly law.  However, the Zeus of CLASH condemns the mortal's murderous act much as the Zeus in JASON condemned the deadly deeds of Pelias, though in the former case there's more personal interest on Zeus' part.  Indeed, later in the story one of the goddesses will remark that while Zeus barely remembers Danae-- who disappears from the film early on-- he has a fatherly pride in Perseus, which explains his constant supervision of the young hero. In any case, Zeus rewards Acrisius by telling Poseidon to "unleash the kraken." The beast is not seen, being saved for the film's conclusion, but its stormy fury destroys the city of Argos and kills Perseus' grandfather.

About twenty years pass, and Zeus' justice strikes again. The god becomes enraged at Calibos, the mortal son of the sea-goddess Thetis, because Calibos has been overly brutal in his profession of hunting, to the extent of wiping out all but one of Zeus' sacred winged horses.  Calibos at that point has been engaged to marry Andromeda, princess of the city of Joppa.  Zeus strikes him with a curse, so that Calibos becomes an ugly horned demon-creature, making him completely unmarriageable.

Thetis, whose worship is strong in Joppa, becomes angry at Zeus for having exalted his own son while punishing hers.  For no clear reason Thetis magically transports Perseus to an amphitheatre in Joppa.  This is one of the movie's weakest points, since this action doesn't directly place Perseus in danger, and Thetis' reasons for doing so are explained with a lot of piffle about "making him see the real world."  Since putting Perseus in Joppa eventually leads to his conflict with Calibos, it would have been far more logical had Zeus placed his son on this road to destiny.  I strongly suspect that writer Cross chose to give this action to Thetis out of personal reasons, given that he was married to the actress portraying her-- Maggie Smith-- and so used this scene as a chance to beef up Smith's lines.

Zeus sees Thetis' transgression and sends Perseus magical gifts: a magical sword, a shield, and a helmet of invisiblity. The invisibility helmet proves the most useful item when Perseus seeks out his heroic destiny in Joppa.  Once there, he learns that although Calibos no longer dwells in Joppa, his mother's power still gives him control of its customs.  Through Thetis' power it's been declared that Andromeda can only be married by a suitor who can answer one of her riddles.  Suitors who fail the test pay with their lives.  By using the helmet Perseus finds out that Andromeda is no Turandot, taking pleasure in the deaths of countless aspirants.  At night Calibos sends an emissary-- a vulture, carrying a golden cage-- which carries away Andromeda's spirit to Calibos' domain. There, even though she pleads with Calibos to be released from his influence, he compels her to learn a new riddle to defeat her next suitor.  Perseus, with the help of the helmet and Pegasus, last of Zeus' winged horses, learns the riddle.  Calibos detects him, the two fight, and Perseus escapes after cutting off the hunter's hand.  With the solution to the riddle Perseus wins his claim to Andromeda, as well as winning her heart on a personal level.

But Thetis is full of wrath for the humiliation of her son.  She curses Joppa to be destroyed by the kraken just as Argos was, unless the denizens of Joppa will expose Andromeda outside the city, so that the kraken can destroy only her.  Thetis is also careful to say that Andromeda must be virgin when she is destroyed.  Whereas the original Andromeda myth carries the intimation that the monster will simply devour the maiden, Thetis' specification has the effect of making the exposure sounds more like a ritual of a mortal's rape by a god.  Perhaps Harryhausen's beloved KING KONG informs this transformation of the original tale.

Having analyzed the intricate mythic setup, I won't devote the same attention to all of the endeavors by which Perseus seeks the head of Medusa in order to repel the invulnerable kraken.  Perseus' confrontation with the Stygian Witches, who share one eye between them, is one of the strongest of these scenes, and the beheading of the Medusa is equally vivid.  It's interesting that whereas Perseus has some soldiers accompanying him, in this film they're little more than cannon-fodder for the various monsters the group encounters.  In the 2010 film, they're more of a retinue that indoctrinates Perseus into the male code of battle.  In addition, Andromeda herself goes along part of the way, showing a certain amount of gutsiness, though by the demands of the story she's obliged to return to Joppa to play her part in the sacrificial rite.  Calibos manages to overtake Perseus, and the two fight to Calibos' finish. Perseus, along with Pegasus and the clockwork owl Bubo, returns to Joppa in time to defeat the kraken and redeem Andromeda.  Zeus forbids Thetis to seek vengeance again and the film ends with a happy marriage-- giving it a note of closure that even JASON can't surpass.

Beverley Cross' script has some interesting subtleties.  Hera, the goddess of marriage who usually nags Zeus about his tomcat affairs with mortals, is barely a presence in the story, and this function has been essentially usurped by Thetis.  In the original Andromeda story the princess is forced to be a sacrifice after her mother Cassiopeia esteems Andromeda's beauty about that of the seagoing "Nereids," thus bringing on the city the wrath of Poseidon's pet monster.  With the interpolation of Calibos as Perseus' rival, Thetis doesn't need any additional motivations for cursing Joppa, though Cross does have Cassiopeia bad-mouth Thetis' looks anyway.  In real Greek mythology Thetis is best remembered not for cursing cities but for being "the one that got away" from Zeus.  Zeus intended to sleep with the sea-goddess, but reconsidered on being informed of a prophecy that any son Thetis bore would be greater than his father; thus, he steered her toward the mortal who fathered Achilles.  This myth isn't referenced in CLASH.  However, Thetis tells her fellow goddesses an amusing story about Zeus trying to sneak up on her in the form of a cuttlefish, after which she drove him off in the form of a shark.

More than most Harryhausen films, CLASH deals in images of powerful women.  Even though the goddesses cannot resist some of Zeus's edicts, Thetis does defy the father-god by insisting on destroying Perseus' happiness, at least up to a point.  When Perseus loses the invisibility helmet, Zeus commands Athena to send him her owl Bubo.  Athena refuses to part with her beloved bird but provides a substitute by enjoining Hephaestus to make a mechanical version, who does provide some vital help during the hero's quest.  As noted above, Princess Andromeda at least tries to accompany her lover into hell.  The three weapons Zeus sends to Perseus are actually said to be owned by the goddesses Hera (the shield), Athena (the helmet), and the sword (Aphrodite).  The association of the love-goddess with a martial weapon doesn't make much sense, but I theorize that Cross wanted this arrangement in order to reference the three goddesses who vie for Paris' approval in the story of the first Olympian beauty contest.  The cannibalistic Stygian witches and the snake-bodied Medusa are also powerful figures despite their grotesquerie, and even after death, Medusa's blood spawns the scorpions who kill all of Perseus' redshirt comrades.  Whereas some heroic quests are structured to pit male against female, in CLASH Perseus exists less as a representation of masculinity than as a rather neutral figure caught between positive and negative aspects of femininity.

I noted above that this film has none of the "daddy issues" suffusing the original Perseus myth, and which also appear significantly in the 2010 Louis Letterier movie.  Certainly this Perseus never minds having been raised without knowing his true father; when Zeus comes along to guide his mortal progeny down the path of heroism, Perseus accepts it all quite matter-of-factly.  Unlike Jason and Sinbad, Perseus feels a bit of a cipher, which may have been one reason I didn't care for the film originally.  Still, I find now that this is an extremely imaginative reworking of the Perseus myth, more fertile because it incorporates motifs from modern stories like KING KONG and from fairytales (the element of the demonic suitor summoning the princess to his lair has a fairy-tale feel to it, though no specific influence springs to mind).

Posted by Gene Phillips at 2:52 PM
Email ThisBlogThis!Share to TwitterShare to FacebookShare to Pinterest
Labels: combative adventures, the marvelous