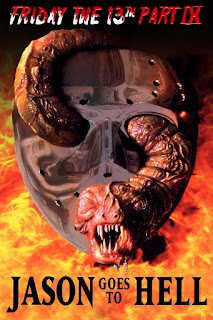 Though I called the eighth FRIDAY THE 13TH installment as "a big mess," I could wish that it had finished off the Jason series. However, I suppose if these two place-holders had not made some money, the far superior FREDDY VS. JASON  would have languished forever in development hell. So in a sense, that film's escape from hell depended upon the Hockey-Mask Horror "taking the H-train."

However, the train doesn't leave until the film's end, and I could hardly even regard this film's monster as having any relation to Jason Voorhees. Director/co-writer Adam Marcus gives no indication that he's ever seen a FRIDAY film, nor that he knows anything about the character's monstrous appeal. In fact, I suspect that he researched the wrong films to make this one; that he chose to screen HALLOWEEN II and ALIEN in order to come up with this much bigger mess.

Some Jason films dealt with what I termed "the transference of evil," in which Jason seemed to mirror the obsessions or destinies of other characters. But aside from the character's relationship to his dead mother, Jason wasn't much of a family man; he had no special interest-- unlike Michael Myers-- in pursuing other members of his genealogical tree. He also had no direct relationship to any aspect of Christian mythology, and has never been viewed in the vaguely Satanic terms allotted to Michael, accused of being "pure evil."

The film begins without any linkage to Part Eight. Jason is seen stomping around Crystal Lake, but for the first time, the forces of law and order are waiting for him. They blow the serial killer to pieces, which would suggest that they know he's something more than human. Yet the officers then act like they've just blown the hell out of an ordinary mortal, for they cart his remains to the nearest morgue instead of trying to incinerate the Jason-pieces. A morgue doctor examines the remains, but the disembodied heart of Jason proves that it has some strange power over the mortician, for the guy devours the heart and thus becomes the vessel of Jason. Later in the film, it will be revealed that even though this version of Jason can occupy other bodies, they can't serve as permanent vessels, since his spirit burns them out. He can survive, however, if .he manages to possess the body of a near relative. This Jason is also able to separate from a host-body in quest of another one, taking the form of a gross little worm that looks like a distant relative of the newborn alien from ALIEN.

There's also a monster-hunter named Creighton Duke who somehow knows the whole story about Jason but can't convince anyone as Jason starts his murderous body-hopping-- and even then, he only convinces a young fellow named Steven. Steven becomes one of the series' few male antagonists for Jason, and actor John D. Le May-- formerly of the unrelated-but-from-the-same producer FRIDAY THE 13TH THE SERIES-- gives the best performance in this dismal, gory flick. Duke's main purpose is to be an ersatz Van Helsing, arming Steven with knowledge and a special weapon, a mystic dagger that can send Jason to hell-- but only if he's stabbed with it by a family member, sort of the reverse of Jason's rule about only finding new life in a relative's body.

Aside from Le May's performance, and a slightly tougher-than-average female lead in Jessica, the grown daughter of Jason's half-sister, the film is dull even amid multiples scenes of violence. Jason is duly consigned to the Bad Place, and this climax is slightly enlivened by a quickie reference to the proposed crossover with Fatal Freddy-- though it took another ten years for said crossover to come to fruition. 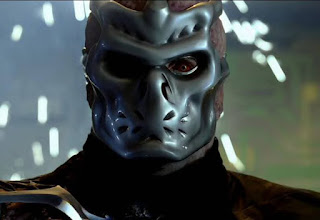 JASON X is a slight improvement, but only because it dispenses with the ALIEN crap. Purportedly the scriptwriter chose to send Jason into a futuristic SF-scenario in order to keep from conflicting with the proposed Freddy-Jason script, set in a present-day time-frame.

This time government officials are a little more clever about dealing with Jason: once they find that he's a supernatural thing that can't be killed, they plan to cryo-freeze the killer and send him into space. Unfortunately, Jason breaks free and only gets frozen because a female technician lures him into the freeze-pod, sacrificing herself to get rid of Old Hockey-Mask.

Over four hundred years later, the population of Earth has left the polluted planet, and no one has come across the cryo-pod and its contents. But students seem to seek Jason out no matter how well he's hidden, and a field trip of future-students lands at Crystal Lake and brings the pod back to their spaceship. Jason and Rowan both come back to life, and Jason starts killing. He encounters some opposition, a team of space marines led by a tough guy named Brodski, but they too are slowly picked off.

In X's best scene, KM-14, a female android who serves one of the professors, upgrades into a super-warrior and blows Jason to pieces-- though both crew and students don't have the sense to collect the pieces and dump them into space. Jason re-integrates-- happily, with no ALIEN-worms involved-- and also assimilates some of the ship's metal components, becoming a "Heavy Metal Jason" who can no longer be wounded by KM-14's weapons.

The android doesn't get the honor of dispatching Jason in the end; that goes to tough marine Brodski, so that even though his is a pyrrhic victory, the nature of the conflict is intense enough to enter the combative mode.

Posted by Gene Phillips at 3:16 PM
Email ThisBlogThis!Share to TwitterShare to FacebookShare to Pinterest
Labels: combative dramas, the marvelous