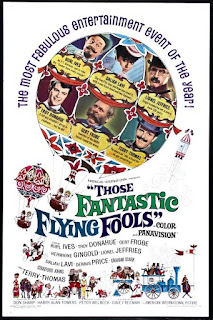 Looking at the IMDB listing for Harry Alan Towers' production credits, this movie-- also known as BLAST-OFF, and originally titled JULES VERNE'S ROCKET TO THE MOON-- seems an odd duck indeed. Towers' resume is filled with a lot of action thrillers and horror films, and in my experience most of them were poorly made time-fillers. What I've read of Towers' bio is that he was a consummate deal-maker, forever jaunting around the European continent making deals to get movies made. The result is that many of his films-- particularly the Fu Manchu series with Christopher Lee, for which Towers is probably most famous-- display a polyglot of nationalities in their production credits.

FOOLS probably wasn't much more expensive than Towers' other productions, but it gives the illusion of luxury thanks to its multi-star cast-- Burl Ives, Terry-Thomas, Troy Donahue, Daliah Lavi, and Gert Frobe, just keeping to those who had enjoyed starring roles previous to this 1967 flick. A closer look reveals that the film remains chained to a few basic locations and doesn't invest much in spectacular effects-work, in contrast to THOSE MAGNIFICENT MEN IN THEIR FLYING MACHINES, which came out two years previous from an unrelated production company. Did Towers have some notion of "upping his game," of becoming one of the more mainstream movie-makers? It's a tempting notion. But Towers had just come out with the first two Fu Manchu films in the two years previous-- both directed by Don Sharp, who also helmed the adventures of the Asian mastermind-- and he would make three more in the ensuing years, as well as his incredibly dull COUNT DRACULA. So if the producer entertained any thoughts of mainstreaming his work, they probably didn't last very long.

I haven;t read the Verne novel on which this is supposedly based, but it's been said that the film's a loose adaptation at best. The meandering story is all about assorted characters-- mostly British, with a couple of other nationalities mixed in-- attempt to experiment with burgeoning new technology, some of which has nothing to do with firing rockets to the moon. For instance, Terry-Thomas's character gets hold of a magnetic pool ball designed to cheat at pool, while Gert Frobe perfects a helmet with a little cannon on top of it. But when the rocket-project gets going, that becomes the common theme that draws everyone together. The ticking clock is that leading lady Daliah Lavi, affianced to prospective rocket-pilot Troy Donahue, knows that the incompetents behind the project are going to make a fatal shambles of everything, so she seeks to prevent the launch. Though the main borrowing from Verne is the idea of using a cannon to shoot a capsule to the moon, the general comic attitude toward all the learned bumblers is also very Vernian.

Only in one scene does this lightweight movie assume some weight, if only by accident. A group of the bumblers are about to test a new explosive by setting it off in the countryside. Donahue, whose girl has just floated away in a balloon, runs up looking for help. The explosive goes off, and everyone is felled by a massive wind that knocks them down. Given that the fifties and sixties were the height of atomic-bomb cinema, I find it impossible to think that the film-makers weren't aware of the parallel to the first atomic test. But the scene in FOOLS-- in which no one suffers more than ruffled hair and clothes-- is oddly reassuring. It makes one long for the halycon days of Victorian technology, when humankind had yet to "become Death, the Destroyer of Worlds."
Posted by Gene Phillips at 2:33 PM
Email ThisBlogThis!Share to TwitterShare to FacebookShare to Pinterest
Labels: the marvelous