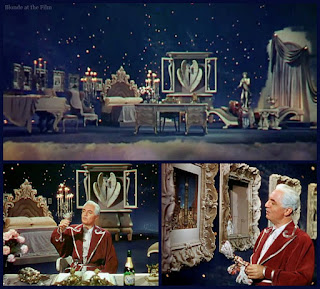 
A revue-style film such as ZIEGFELD FOLLIES poses some distinct challenges to my system of categorization. There are a few sequences that flirt with ideas of the supernatural, but should any of them be taken seriously? The opening frame story shows the deceased Flo Ziegfeld, happily enjoying his lot in a well-appointed heavenly apartment, when he starts meditating what it would be like to put on one more big revue-- which, as it happens, will feature not the luminaries of the famous showman's own time, but the cream of the MGM contract players. Still, given that the film never again returns to Heavenly Flo, I feel secure in dismissing his sequence as belonging to the naturalistic version of the "fallacious figments" trope.

Most of the musical numbers and comedy routines are performed for the screen as if they were taking place on Ziegfeld's imagined stage, so that for the most part, the diegesis supports the idea that they're not phantoms of his imagination, but hypothetical real players going through their paces-- which also means that they are naturalistic by nature. I'll get to the one exception shortly.

The opening musical number, "Here's to the Girls," is so over-the-top that it verges on outright fantasy. Dozens of female dancers parade around the stage in rose-petal pink outfits, enough to make even the more ardent lovers of the color become worn-out. It's supposedly a salute to femininity, at least in its most passive aspect-- except that it takes a weird turn with the appearance of Lucille Ball-- still deemed an MGM beauty, and years away from becoming known as a comical hausfrau. She joins the parade of "pretty in pink" dancers, but then diverges into the company of another group of females, all dressed in black cat-suits. Lucy cracks a whip around their heads to keep them in line, but as the still below shows, they can still display their claws in front of their mistress. 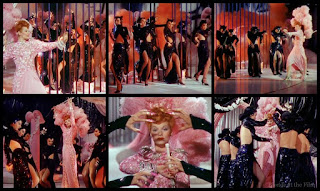 I don't know if most viewers in 1946 made any correlation between whips and cats (and a synonym for cat that has another intriguing meaning). Yet I could well believe that the film-makers were having some fun with some light lesbian imagery, confident that the audience would be titillated without exactly knowing why.

I'll pass over the possibility of analyzing most of the other sequences, none of which are quite as eye-popping as the opener-- except for the one number that, by itself, would fall into the phenomenal domain of the uncanny.

":Limehouse Blues," the film's longest number, follows an unnamed Chinese man (Fred Astaire in "yellow-face") as he wends his way through London's Limehouse district, notorious as a haven for criminals, Chinese laborers, and Chinese criminals. He spots an elegant Chinese beauty (Lucille Bremer, also with Asian makeup) and follows her. She gazes longingly at an ornate fan in a shop-window, and then passes on. Astaire inquires about the price of the fan with the shop-owner, but finds the price beyond his means. Back on the street, he gazes at the fan, seeing in it a possible key to the lady's heart. Then a small gang of smash-and-grab thieves break into the shop-window, and try to flee while exchanging shots with the London bobbies. Astaire reaches for the fan, accidentally put into his reach by the thieves' actions-- but this action spells his doom, as he's fatally struck by a bullet. The remainder of the number shows the Chinese man dreaming about a happy, dance-filled union with the object of his affection, before he wakes to dreary reality, and his own demise. 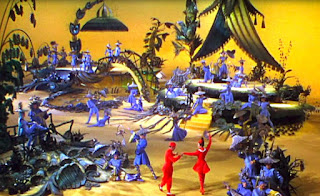 Short as it is, I would dream Astaire's dream-sequence "uncanny" because, in contrast to the other numbers, it's being imagined by one of the characters, and goes beyond the bounds of what one might reasonably expect of an ordinary dream. Were "Limehouse Blues" a short of the same length, it would fall into the uncanny domain. But within this revue-structure, the uncanny mode is overpowered by the great majority of naturalistic sequences.

I should comment also on my choice of Fryean mythoi. Only a few sequences are comedies in the usual sense, in being focused on outright humor, and "Limehouse Blues" is certainly in the vein of drama. However, the majority of the musical numbers are devoted to celebrating feminine glamour. in such a way that it would usually be taken as a validation of heterosexual union, even if the opening number is a bit problematic on that score. Thus, even when there is no actual romance in a given number, as in the concluding song "Beauty," I tend to see all such glamour-celebrations as indicating the successful union of romantic interest-- and this aligns, for reasons Frye also expounded upon, with the mythos of comedy.
Posted by Gene Phillips at 3:32 PM
Email ThisBlogThis!Share to TwitterShare to FacebookShare to Pinterest
Labels: delirious dreams and fallacious figments (n)