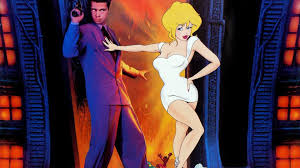 Sometimes the aesthetic failings of a bad movie provide more insight to a critic than any average well-polished effort. Upon recently re-screening Ralph Bakshi's 1992 COOL WORLD, I found myself moved to write two separate essays about it, even though it was an utter flop that allegedly sank whatever was left of Bakshi's feature-film career. In this essay, I devoted some thought to the way the film inadvertently reflected some of the broad outlines of the history of animated cartoons in America. In this essay, I'll consider the film itself, not so much for what it is but what it might have been.

There have been umpteen films whose logic doesn't scan when examined carefully. COOL WORLD is in a different category from any of these, for most films make at least a show of consistency. From start to finish, Bakshi, despite attempting to emulate the success of 1988's WHO FRAMED ROGER RABBIT?, makes no effort to provide the viewer with any logic as to the workings of a world where animated cartoons mingle with living human beings.Given that Bakshi showed nearly no concern with explicating the tangled skein of his story for the viewers' benefit, it seems pointless for me to try to recount the few plot-threads that make up the movie-- particularly when there are reviews online which have provided yeoman service in trying to untangle the mess, like this one from I SPIT ON YOUR TASTE.

What I'm doing here, rather, is exploring the thematic ramifications of what Bakshi wanted to do the original idea behind COOL WORLD-- an idea he was forbidden to pursue, according to numerous write-ups like this one-- and what he ended up making instead. Nathan Rabin in the aforementioned link describes Bakshi's original idea thusly:

he sold his idea for a horror cartoon about a hip underground cartoonist stalked by the half-animated offspring of an ill-fated tryst with a cartoon sexpot to Paramount.


We as viewers will never know whether or not Bakshi's original idea would have made a good film or not: the filmmaker's productions had always been, to say the least, rather uneven. But like most of his earlier works, the idea is a more hard-edged rendition of more mainstream themes. ROGER RABBIT teased the viewer with the idea of sex between human beings and toons, and yet defused any scandalous potential, the better to soothe audiences who expected something that didn't stray too far from the mainstream. Early in ROGER, Eddie Valliant shows the titular rabbit evidence that Roger's wife has been "playing patti-cake" with Roger's boss, but the joke is that she really is just playing patti-cake with the guy. The gag simultaneously illustrates Roger's twisted toon thinking-- to him, his wife's playing parlor-games with another man is as much a betrayal as her having illicit sex (if not more)-- and it keeps the audience's adults from having to explain a sexual tryst to their young'uns.

There's no such "out" in Bakshi's original idea: sketchy as it is, it's clear that Bad Things Happen when a living human being, or "noid" (short for "humanoid") has sex with a toon (or "doodle," which is Baskhi's more irreverent version of the same thing). "Doodle" is a clever turn of phrase, reflecting Bakshi's interest in scatological humor ("doodle = doody.") I suspect that even if Bakshi had finished the film he wanted to make, his "Cool World"-- whether it would have been a separate universe, or just "the bad side of town"-- would have been roughly the same sort of chaos that appeared in the finished 1992 film. In the completed Cool World, the cartoon-verse is cool only in the sense that it's a place of no consequences. Doodles in the Cool World beat each other up, piss on each other, and apparently can have produce babies after having sex, though doodle-children seem to be be just as weird, as perverse and as invulnerable to real harm as any other doodles. It's a world devoted to the Freudian Id running wild at all times.

Not having access to Bakshi's original script, I can only speculate on the reasons why the half-human child of the "underground cartoonist" would have been royally pissed off at her father. Would the guy have been a deadbeat dad, who deserted a pregnant doodle-mom? This was certainly be a stock formula in film-melodramas since the silent years of cinema, and one that applied not only to forbidden liaisons between the differing classes, but also between White Americans and non-whites. The script-kernel strongly suggests the horror of miscegenation, and since Bakshi himself has claimed that he spent his adolescence enjoying an easy familiarity with his Afro-American neighbors, I'll speculate that he may have intended to satirize the fear of miscegenation that so frequently surfaced in American's middle and upper classes.

If Bakshi had any such intentions, they went out the window when his producers saddled him with a new script, written by two guys who had enjoyed their biggest writing-hit with 1982's POLTERGEIST. To the scripters' credit, they did at least keep the basic idea of the forbidden nature of noid-doodle sex, but instead of focusing on one cartoonist pursued by his half-breed offspring, the rewritten COOL WORLD deals with two male human beings being subjected to the temptation of curvaceous doodle-dolls. 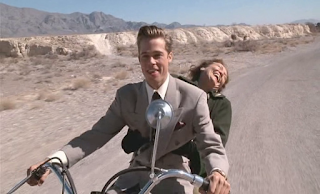 Frank (Brad Pitt) is introduced first, though he turns out to be more of a supporting character, as well as the "superego" to the Id of the Cool World. He's first seen as a young man in 1945, shortly after the end of World War II. which in a generational sense makes him something of a "father-figure" to the other male, though Pitt was actually younger than his male co-star. A traffic accident injures Frank and takes the life of his mother. Immediately following this trauma, Doc Whiskers, a weird scientist-doodle in the Cool World. uses his new invention, "the spike," to spirit Frank into the doodle-dimension. Despite joining the doodle-universe, Frank remains a living human being, and he's almost immediately appointed the head of law-enforcement in Cool World. Much later in the film-- too late to help orient the viewer-- it's revealed that Frank only has one law to enforce: no sex between humans and doodles. It's loosely implied that sometimes other humans cross over into Cool World even without the intervention of Whiskers and his spike, but Bakshi spends no time on such petty details-- even though, since Frank's the only "noid" we see among the doodles, it seems a little like he's set up only to police himself. Sure enough, again disturbingly late in the film, it's revealed that in the 40-plus years since his transition, Frank regularly hangs with a doodle girlfriend, but that neither of them have transgressed on the Cool World's one prohibition. Ah, the rectitude of the "Greatest Generation!"

Enter Jack Deebs (Gabriel Byrne), a guy who's spent years in prison for an act of passion: murdering a man who'd been sleeping with his wife. Momentous as this act might be in the life of a real human being, no further details about the wife or her lover come up again: Deebs is really in prison only so that he can fantasize about his ideal woman. Perhaps in the abortive story-idea, Bakshi had some idea of the underground cartoonist having coitus with a being drawn by his own pen: certainly this would be a familiar, if onanistic, idea often seen in underground comics. But in COOL WORLD, Deebs' creation-- a blonde bombshell named Holli Would-- is not really something he's created; she's existed in the doodle-dimension for some indeterminate time, long before Deebs draws her to help get him through his woman-less confinement. Strangely, Holli waits until Deebs's last day in prison to draw him into her dimension-- perhaps to avoid competition with three-dimensional women? At any rate, as soon as Deebs is in the Cool World, his naivete makes it probable that he will eventually have sex with Holli-- whom Deebs thinks he's created-- even though Frank makes token attempts to keep Deebs from making this Big Mistake.

What's the Big Mistake, since this time it has nothing to do with spawning unwanted hybrid children? Well, it's more along the lines of Lovecraft than anything. Holli, for reasons that are never clear, cherishes the desire to cross over into the mortal world and become mortal herself, which she can only do by having sex with a human "noid." Perhaps needless to say, Holli succeeds and makes the jump to the other world-- at which point Frank belatedly reveals to Jack that Holli's presence in the real world could destroy both dimensions. Even when Holli successfully transforms into a living human being (Kim Basinger), the transformation isn't stable, as she sometimes morphs into a clown-version of herself-- an implicit mockery of her feminine charms. perhaps. But by dumb luck Holli stumbles across Doc Whiskers, who has also made the transition (long after the viewer has mostly forgotten who he is). He directs her to "the spike," which may be able to stabilize her. Frank tries to stop her and Holli kills him, which finally emboldens Jack to pursue her. Once Holli gets the spike, regular human beings start turning into hideous doodle-versions of themselves-- except for Jack. He transforms into a hyper-muscular superhero, complete with an absurd adenoidal voice, and after some struggles against Holli's conjured-up cartoon-demons, Jack manages to restore the disparate dimensions into a status of "separate and unequal." 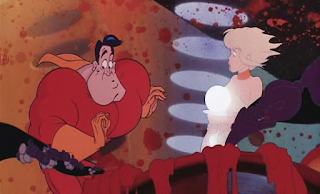 This climax is the only part of COOL WORLD that makes up for the general tedium and incomprehensibility in the beginning and middle sections of the film: once Bakshi gets himself past all the scenes that required some degree of exposition-- for which Bakshi usually substitutes some form of cartoon-havoc-- he's free to let the demons of Cool World run riot. filling the screen with their Cthulhu-esque chaos. To be sure, both Deebs and Frank remains flat characters from start to finish, so there's no sense of invigoration when Deebs gets his act together, nor any sense of tragedy when Frank dies. Not that Frank really dies, for in yet another last-ditch revelation, "a noid killed by a doodle becomes a doodle." Thus Frank is reborn into cartoon-form, and is finally able to unite with his doodle girlfriend. Holli's punishment for almost destroying two worlds is quite underwhelming, too. Deebs-- who has permanently transformed into the superhero-doodle, even though he Deebs WAS NOT killed first-- has decided to make Holli into his new wife, and the last shot shows Doodle-Holli sitting around discontentedly, now unable to get out of Doodle-World and, for good measure, stuck with a cloddish superhero husband.

It's an unholy mess of a film, and it's hard to avoid the thought that in composing such an ode to freeform nonsense, Bakshi was cutting off his nose to spite his face. He took the formulaic script and gave it no more cursory attention, but even though the film's failure may have embarrassed the interfering producers, it certainly did the animator's career no good whatever.  But then, as I mentioned in the other essay, Bakshi's role as the "Crown Prince of Adult Animation" was bound to lead to some sort of usurpation by the forces of mainstream marketing. There could be great potential in the basic vision of a cartoon-verse where all of humankind's illicit desires run riot. But COOL WORLD, like the hybrid-child of Bakshi's original idea, ends up more like a "doodang" than a doodle-- a doodang being a beast that literally does not know whether it's fish or fowl.

Posted by Gene Phillips at 11:14 AM
Email ThisBlogThis!Share to TwitterShare to FacebookShare to Pinterest
Labels: combative comedies, the marvelous