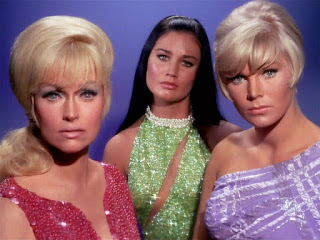 
Though "Charlie X" and "Enemy Within" had focused on particular examples of sexual obsession, "Mudd's Women" is the first broadcast episode to deal with the way sexual attraction works in the world of the Federation. Given that Roddenberry sold the series as a "space western," it's not surprising that the first thing we see of male-female relationships in this futuristic culture derives from the model of the historical western. To some degree there were already implications that "the final frontier" was primarily won by men, just like the western frontier, and that women followed in the wake of those men. The script of "Mudd's Women" is credited to Stephen Kandel, but the basic idea has been attributed to Roddenberry, who evidently based his science-fiction scenario on the American custom of "mail order brides."

Though Roddenberry was a progressive thinker, he clearly enjoyed putting beautiful women on display, if only in keeping with the familiar Hollywood mantra that "sex sells." Still, there's more going on in the script than either pure pandering or even the intellectual critique of pandering.

The story opens with what amounts to the first portrayal of the Enterprise crew as "space cops." The starship comes across an unlisted freighter-craft and calls upon the ship to identify itself. Instead the ship flees, overloading its engines. In one of the series' least impressive "ticking-clock" perils, the Enterprise is only able to save the four occupants of the freighter by over-extending its own engines, resulting in the loss of all but one of the lithium (later dilithium) crystals powering the ship.

The ship's pilot is a flamboyant rogue, soon revealed to be a slick operator named Harry Mudd, guilty of assorted infractions against Federation law. His three passengers-- or "cargo," as he calls them-- are three voluptuous women: Ruth, Magda, and the mythically-named Eve. All three hail from poor planets lacking in male populations, and all have agreed to let Mudd convey them to frontier-planets with more testosterone.

The women provide the second assault on the Enterprise's integrity, for all of the males, except for Spock, are beguiled and somewhat stupefied by all the feminine glamour, (The episode doesn't show any of the crew's women reacting in any way to this hyper-feminine invasion: Yeoman Rand does not appear and Uhura has only a few lines.) Later it will be revealed that this glamour stems from an illegal "Venus drug" administered by Mudd; a drug that enhances the masculine or feminine qualities of those who take it-- sort of a "gender essentialist" version of a steroid. Without the drug, the three girls begin to look haggard and less than comely-- all of which means that Mudd isn't just a transporter of women: he's a pimp, and one selling "sizzle" in place of "steak." However, the men don't see this. Kirk in particular is mesmerized by Eve, and she, unlike the other two "traveling brides," reciprocates somewhat (making her the captain's first romantic conquest in the series, not counting Yeoman Rand).

Mudd is given a rather one-sided trial (no lawyers for civilians, Starfleet?) However, because the arch-swindler knows that the ship needs new lithium supplies, Mudd makes arrangements to use his "cargo" as bargaining chips with the lonely men of the nearest lithium-mining planet. Mudd is so wily and Kirk so duty-bound that it's something of a pleasure to see the series' hero forced to deal with the miners to get the ship's fuel, as well as having to dismiss charges against Mudd.

The nub of the intellectual argument comes late in the story. The miners-- conveniently three in number-- hold a party with the three prospective brides. Ruth and Magda are entirely good-time girls, but Eve displays discontent with being sold as a sex-object. She runs off into a storm, while head miner Childress and the Enterprise crewmen try to find her. Childress overtakes Eve and takes her to his personal quarters nearby. At this point Roddenberry upends his own idolization of feminine pulchritude, for without the drug Eve begins to look ordinary. At the same time, without the haze of sexual stimulation in the way, Childress is able to relate to Eve as a person rather than an object.

The final scene reverses this conclusion a bit, as Roddenberry allows Childress, the far-future descendant of Western miners, to have his cake and eat it too. Kirk, with Mudd in tow, arrives on the scene and exposes the secret of the Venus drug. For no clear reason-- except to throw some light on the magical capacities of changeable women-- Kirk brings along a fake version of the Venus drug, and when Eve takes it, she spontaneously asserts her own feminine glamour, without any steroidal assistance. Kirk gets the fuel he needs for his ship, and though he has presumably kept his bargain to dismiss Mudd's earlier charges, is now able to toss Mudd in the brig for the use of an illegal drug. Interestingly, as Eve plights her troth to Childress, she alludes to her almost-romance with Kirk by implying that he's married to the Enterprise. "Mudd's Women" was third in production but sixth in release, so presumably Eve's line was something Roddenberry decided to develop further in the sixth-to-be-filmed episode, "The Naked Time."

As all TREK fans presumably know, Mudd made one more appearance in the show's second season, but that narrative didn't involve his role as a galactic pimp.


Posted by Gene Phillips at 1:39 PM
Email ThisBlogThis!Share to TwitterShare to FacebookShare to Pinterest
Labels: combative dramas, the marvelous