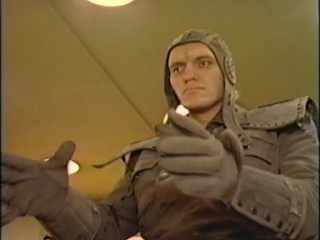 Though the Italian-made HUMANOID isn't a good film, or even a good STAR WARS rip-off, I'll say this for it: it chooses to swipe from elements in the Lucas film that other rips-- notably producer Roger Corman's 1983 SPACE RAIDERS-- didn't even seem to notice. It's quite possible that the scriptwriters-- including Aldo Lado, who directed the film under the pseudonym "George Lewis"-- were leery of any legal ramifications for modeling their story too closely on George Lucas's then-recent blockbuster.

I pointed out in my recent review of the original STAR WARS that compared to most of the SF-films that preceded it, the narrative showed genuine respect for the made-up religion of the Jedi Knights. Most SW-imitators barely acknowledged this aspect of the original film, preferring to churn out cheapjack imitations of the film's space-skimming ships and blazing ray-blasters. Mediocre though THE HUMANOID is, the story does focus on a "spiritual odyssey" of sorts.

In contrast to WARS, HUMANOID starts out with the good guys still in control. Earth, which for some reason has changed its name to "Metropolis," is ruled by "Great Brother." Great Brother's own brother Lord Graal-- never seen without his imitation Darth Vader helmet-- was exiled to another quadrant with his pet mad scientist Doctor Kraspin and his sadistic wife Agatha (who likes to drain young women of their blood for the same reason as Elizabeth Bathory; to keep herself forever young). However, during the group's years of exile, they've built up their own private army, and Kraspin has come up with a new weapon: a missile that will change ordinary human beings into super-powerful humanoids.

Keep in mind that at the time this movie was put together, not even EMPIRE STRIKES BACK had appeared There were really no intimations in Lucas's first film that suggested the Empire's attempts to come up with clone warriors: a subject that would blossom in the "prequel trilogy" beginning with PHANTOM MENACE.

Kraspin chooses to use his test-missile on a large-bodied, but entirely ordinary, "planetary inspector" named Golob. Golob, who is initially bearded, is struck the missle, which not only changes him into a mindless colossus but also gives him a clean shave. After Graal turns some of his own soldiers loose on the hulk to confirm that he's now immune to "nuclear shells," the evil lord sends Golob on a mission to kill Great Brother, and one of his foremost female aides, Barbara Gibson.

The fly in the villains' ointment is that even though Golob easily plows his way through every armed soldier in his path, the power of the spirit is more than he can handle. For reasons that escaped me, Barbara just happens to be entertaining a guest: an Asian boy nicknamed Tom Tom. The kid wears an outfit like that of Luke Skywalker but possesses the spiritual power of Obi Wan, for he successfully manages to overcome Golob's programming and turn him into an ally, albeit one who talks like the Hulk: "Barbara-- my friend."

Nothing daunted, Graal's forces kidnap Barbara while simultaneously planning to use their special X-element to create a horde of superhuman warriors. Golob, Tom Tom, and a Han Solo-clone with the un-evocative name of "Nick" invade Graal's sanctum, destroy the X-element, rescue Barbara and flee before everything blows up. In the coda, Golob re-transforms back into a human being, and even somehow gets his beard back in one shake of a lamb's tail. Oh, and Tom Tom reveals that he's some sort of reborn Tibetan sage who came to the future to help out, and promptly invokes his powers to zip back to his previous existence on Old Earth.

Again, I emphasize that when I say that there's a "spiritual" side to HUMANOID, I'm not saying that it's well executed. Still, there is a basic "religion vs. technology" motif here, in that technology turns Golob into a mindless myrmidon, while Tom Tom's mental magic reforms him to some extent. Golob possibly owes his name to the cinematic version of The Golem, which like Fritz Lang's film METROPOLIS is best known from its silent-film origins. At the same time, Golob is set up to recapitulate another archetype dear to the hearts of Italians: the badass muscleman who can toss lesser men around like matchsticks, and who is most often seen in dozens of Hercules and Maciste films.

The action-scenes are watchable if never really exciting. Some of the film's charm for modern viewers may stem from watching its few big-name actors slumming in this low-budget production, such as Barbara Bach and Arthur Kennedy. However, for me the most fascinating thing is that though the performances aren't necessarily all that great-- least of all from Richard Kiel as the Herculean Golob-- they are all unusually low-key. I for one am used to seeing the actors in low-budget Italian SF chew the scenery outrageously, as in 1978's STARCRASH. In contrast, director Lado-- whose talents were better used for giallo like 1971's SHORT NIGHT OF GLASS DOLLS-- seems to have encouraged the players to keep the mugging to a minimum.

Posted by Gene Phillips at 3:15 PM
Email ThisBlogThis!Share to TwitterShare to FacebookShare to Pinterest
Labels: combative adventures, the marvelous