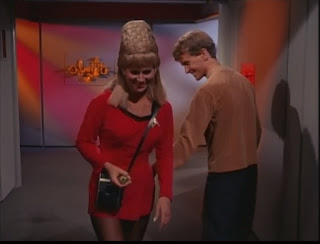 Fortunately for me, few Classic Trek episodes require the degree of explication that "Man Trap" did. "Charlie X," the second-aired episode, is popular with fans, but I've always found it a little over-rated.

"Where No Man Has Gone Before," the second TREK pilot and the first story that establishes Kirk as the Enterprise's captain, had been of necessity filmed prior to "Charlie X," and on a philosophical level it's a superior treatment of a frequent TREK theme, "the irresponsible god." By comparison "Charlie X" is more of a character study, asking the question as to what would happen if a human adolescent, heir to all of the insecurities of that age, possessed the power of a god.

One can't complain about the quality of the acting in this episode. Robert Walker Jr. excels in portraying Charlie Evans, who at age 3 became a castaway upon a remote planet and was not discovered by Federation representatives until he reached 17. Spock is particularly curious that Charlie could have survived on the planet's sparse resources, to say nothing of his unlikely ability to teach himself to talk via his downed ship's language-tapes. Kirk is moderately friendly toward the youngster, but slightly curious that the transport ship dropping Charlie off seems to be in a big hurry to get away.

It later transpires that Charlie survived only because the remote planet was the home of a non-corporeal race of beings, the Thasians. To save the youth's life, the Thasians imbued him with supernormal mental powers, but they never intended him to leave the planet, given his potential for misusing his godlike abilities.

It's not clear how Charlie manages to leave the remote world without alerting his ghostly supervisors, but the audience soon learns that the transport-crew feared Charlie because he terrorized them. Possibly, after Charlie saw how the transport-crew reacted to his intemperate actions, he decided to conceal his true nature, for aboard the Enterprise he makes an effort to seem like an ordinary young man. He seems willing to let the transport-crew go their way as long as they keep quiet. When he overhears the crewmen trying to warn Kirk about the viper in his midst, Charlie uses his mental power to destroy them.

Before this happens, of course, the episode provides considerable buildup, as Charlie gradually starts to demonstrate his powers in little ways, such as performing card tricks for the first girl he's ever seen in his life: Yeoman Rand. However, the young man's emotions overcome his reservations, and he uses his powers to become top dog on the Enterprise. His ambitions are twofold: he wants to reach the nearest colony-world in order to experience human society, and he wants to win the heart of Yeoman Rand.

The structure of "Charlie X" would appear in many later TREK episodes: malefic agents take over the Enterprise, attempting to use the starship to infiltrate human society-- generally with the implication that the agents will infect Federation society like a cancer. The episode is more affecting than most of the others in this category, since the audience empathizes with Charlie's hormonal confusion. When the Thasians intervene to spirit their creation back to his desolate existence, even Kirk, who knows the danger Charlie poses, expresses the wish that they could find some way to give the  boy a normal life. But there's no cure for the disease of godhood, and so the Enterprise returns to the normal round of life, a life that the god in an adolescent's body can never enjoy.

One of the more interesting psychological motifs of "Charlie X" is that as soon as he comes aboard the Enterprise, he immediately sees Kirk as a potential father-image. Apparently, even though the men of the transport were the first males Charlie had seen since age 3, none of them possessed the authority to impress Charlie, who on some level wants to be "given limits." His reaction to Yeoman Rand is somewhat more logical, since he's never before seen a woman, at least not one that he can remember having seen. Freud of course argued that the male infant incontrovertibly based his image of feminine attractiveness upon the first female he saw and touched: usually the figure who fulfilled the role of the mother. The script underscores this, for when the Yeoman tries to divert the over-attentive youth by introducing him to a female crewman who is Charlie's age, Charlie rejects the younger woman. Further, he even evinces indifference to all the other females on the ship, saying that they're "all the same," irrespective of their ages. The logical conclusion is that the only way all the Enterprise-females could be the same is that none of them are Yeoman Rand.

Kirk's quasi-paternal relation to Charlie is definitely not Freudian, however. Prior to finding out what a monster Charlie is, Kirk certainly doesn't want to become Big Daddy to an insecure youth, but when it's evident that no one else can reach the youngster, Kirk resigns himself to the task. Naturally, the captain's attempt to explain to Charlie the wrongness of slapping a girl on the butt remains one of the episode's high points. And Kirk certainly isn't a "alpha male," protecting his access to the most attractive female. He warns Charlie away from Rand, saying that "the years are wrong." Grace Lee Whitney was roughly ten years older than Walker, and she didn't project a particularly maternal aura. Still, the broad implication of Kirk's speech seems to be that Rand probably isn't a virgin, and that therefore it's not quite right for a male virgin to be de-virginated by an "experienced woman." The episode "The Enemy Within" had been filmed previous to "Charlie X," but "Charlie" was broadcast first, and there's no sense in the episode-- unlike "Enemy"-- of a potential romantic vibe between Kirk and Rand. Probably the producers didn't want to tie Kirk down to a particular romantic interest, though they certainly wanted to create the impression that Rand secretly had a thing for Kirk.

Although "Charlie" and "Man Trap" were not filmed back to back, there are some bookended similarities. As in "Trap," Uhura makes a few playful jabs at Spock's nearly impervious reserve. The earliest version of Spock is still allowed to display the occasional indulgent smile: in later episodes, the separation of rank between science officer and communications officer would be enforced more stringently. In addition, while "Man Trap" concerns the depredations of an apparently feminine power on the loose, "Charlie X" revolves around a male predator-figure-- albeit one who doesn't quite know what to do with his power.

Posted by Gene Phillips at 1:51 PM
Email ThisBlogThis!Share to TwitterShare to FacebookShare to Pinterest
Labels: combative dramas, the marvelous