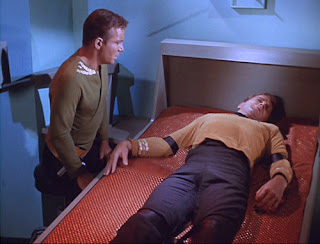 ENEMY WITHIN, the fifth broadcast episode, is less mythic and more intellectually schematic than previous entries. The Richard Matheson script is the first one to posit difficulties arising from the Enterprise's teleportation technology. As in "Naked Time," these denizens of a star-civilization seem remarkably obtuse about taking precautions against contamination. One of the crewmen, part of an expedition to a deserted planet, gets magnetic dirt on him on the planet's surface, but no one suggests that he even take off his contaminated clothes before beaming up. The crewman makes it up to the ship without incident, but the next person to beam up-- the good captain himself-- is split into two duplicates of himself, one a vacillating "Jekyll" and the other a remorseless but passionate "Hyde."
Further, until the transporter's irregularities are fixed, the rest of the expedition on the planet can't beam up-- and the planet's getting freezingly cold as night falls.

It takes Spock and McCoy a little time to figure out that they have one too many Kirks aboard-- particularly the one who accosts Yeoman Rand in her room and tries to rape her. However, "good" Kirk has his own set of problems: without his passionate side, he lacks the ability to make decisions. In the episode's most memorable scene, Spock advances the argument that this may mean that man's "evil side" is most necessary for a commander, while McCoy counter-argues that Good Kirk's intellect provides the greater necessary qualities. The first argument really doesn't sound much like the Vulcan science officer-- after all, isn't he the one who's always advocating the ability of the rational mind to control unruly emotions?  I'd hypothesize that Spock's visually appropriate role of "devil's advocate" came about only because Matheson and Roddenberry couldn't imagine McCoy, that defender of sentiment, assuming such a philosophical posture.

It's a decent episode, though I would conjecture that modern ultraliberals would want to see Rand's almost-rape treated with much more attention to the female character's feelings. I'd admit that even I felt a little leery when Rand tells Good Kirk that she might have concealed the assault because she "didn't want to get him in trouble." At the same time, though, one must keep in mind that Roddenberry was teasing his audience with the possibility of a "love connection" between Kirk and Rand, though it's unlikely that one would have ever come about, even if the Rand character had not been written out of the show later. In any case, while she clearly doesn't want to be raped, the audience is supposed to believe-- no matter how scanty the evidence-- that she does have some erotic feelings for Kirk, just as he does for her. "The Naked Time" episode makes this romantic impasse even more explicit, but though it was broadcast before "Enemy," "Naked Time" was actually filmed somewhat later. Still, Roddenberry certainly had some idea of where Rand's character-arc was headed from the beginnings, and so I find that her romantic leanings do make a difference in her defensiveness of Evil Kirk-- though she still comes across as something of a doormat.

Posted by Gene Phillips at 3:43 PM
Email ThisBlogThis!Share to TwitterShare to FacebookShare to Pinterest
Labels: combative dramas, the marvelous