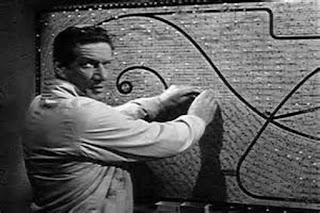 
I BURY THE LIVING belongs to a small collection of decent films directed by Albert Band and written by Louis Garfinkle in the late 1950s, long prior to the period when Band became best known for turning out repetitive formula-flicks for son Charles Band's production companies.

I've examined here many "phantasmal figuration" films in which villains dress up in ghost-costumes. The hidden villain of BURY, however, creates a phantom that's purely of the mind, in order to play upon the mind of viewpoint character Bob Kraft (Richard Boone).

Kraft is a very down-to-earth businessman with a good job and a regular girlfriend. There's just one drawback to the job: due to familial obligations he's expected to perform some minor managerial duties at the local cemetery. In the main office he encounters the means by which the phantasm is conjured forth: a cemetery-map showing in detail which graves are occupied, and which are yet to be filled. Black pins are stuck in the former: white pins in the latter. By mistake, Kraft sticks a couple of pins in the points where their still living owners are supposed to be buried later-- and they promptly die.

I won't discourse in detail on the way in which the villain decides to use this odd coincidence to his own ends, partly because the set-up doesn't really track that well. But like most such films, the act of raising the spectre of uncanny fear is more important than the logic of the plot behind it all. Kraft, the stolid businessman, can't resist repeating the same action, putting black pins in the points assigned to the living-- with the result that the persons indicated pop off. It doesn't help that one of the local lawmen wonders aloud if it's possible that Kraft may possess some unconscious power that dooms men, in the same way that Haitian sorcerers doom their victims by sticking pins in dolls.

It's a paper-thin premise, but it's relatively original in content. That said, without Richard Boone's strong performance, I don't imagine anyone would bother to unearth the film.
Posted by Gene Phillips at 3:45 PM
Email ThisBlogThis!Share to TwitterShare to FacebookShare to Pinterest
Labels: phantasmal figurations (u), the uncanny