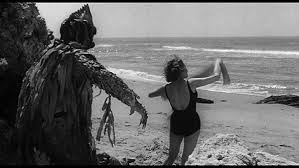 While this film may have debuted in American markets under the title BEACH GIRLS AND THE MONSTER, the TV-title, MONSTER FROM THE SURF, captures the nature of the film far better. While there are both beach girls and beach boys who are under attack, the monster is the star of the show.

Whenever the first half of any film leaves open the question of whether or not the monster is real or not, it's almost a guarantee that one is not dealing with a genuine marvelous presence. The script, principally by Joan Gardner (best known for animation voice-work), dutifully draws upon the standard tropes of 1950s monster-flicks, in order to suggest that the "Beach Killer" may be the mutation of a naturally occurring aquatic creature, but I doubt that anyone who saw the film back in the day was fooled for a moment.

Another "tell" is that the main characters are involved in a psychodrama that almost begs to be the root of all the trouble.

Young Richard Lindsay-- ostensibly a teen, though the actor was pushing 30 in 1965-- is living it up with some fellow cavorters on the beach, when one of the girls is caught alone by a seaweed-bedecked monster. He claws her to death and disappears, after which Richard returns to the beachside home he shares with his father, acclaimed oceanographer Otto Lindsay (Jon Hall), and two others.
There's some tension between Richard and Otto; Dad wants his son to stop lazing about with beachcombers and to follow in the oceanographer profession. However, far more conflict is in the offing with the other residents of the beach house.

One is Otto's wife Vicky, who is portrayed as being much younger than her husband (though ironically the actress was only about ten years Jon Hall's junior). Vicky has been cheating on Otto and Richard hates her for having betrayed his father. Vicky for her part enjoys taunting Richard, trusting that he won't say anything that might hurt his father, and there's a slight suggestion that she'd like to make Richard in addition to her other covert conquests.

The other is technically an ally-- and maybe a symbolic projection-- of Richard. For some time, Mark, a slightly older friend of Richard's, has been the Lindsay's live-in house-guest. (Mark's age is not stated but the actor was ten years senior to the one playing Richard.) Mark was a passenger in Richard's car when the young man's careless driving resulted in a crash, causing Mark to limp from a permanent injury. Thus Richard has talked his father into giving Mark free room and board while the latter pursues the art of sculpting. On top of all that, Mark has succumbed where Richard has not: he's evidently slept with Vicky. For her part, she's constantly going out at night without her husband, making it clear that she has no intention of being bound to anyone.

No candidates for monster-imposture are presented to the audience except Mark and Otto. There are slight indications that Mark might be the culprit-- when Vicky torments him with her plans to go looking for fresh game, Mark mangles a clay sculpture of her face. But in due time Mark is seen walking the beach while the creature preys on another teen-- leaving only Otto. Otto in monster-garb promptly kills off both Vicky and Mark, flees the police in a car (though still half-garbed in monster-wear), and dies in a car-crash.

The film, photographed by an unbilled Radley Metzger, is pleasant to look it if never compelling, least of all in the repetitious scenes of teens dancing and singing on the beach. The psychodrama of the Lindsays is the film's main strength, resembling something along the line of HAMLET crossed with DOCTOR JEKYLL.

While Shakespeare's Hamlet may or may not desire his mother and hate his usurping uncle, Richard doesn't consciously want anything to do with Vicky. Still, some Freudian displacement isn't impossible. As I mentioned before, Mark may be nothing but a projection of something Richard would like to do, given their status as close friends. On the other hand, Mark's leg-injury, while present mainly to give him a reason to share the Lindsay house, can't help but invoke dozens of other older-men figures whose maimed legs signify a loss of potency-- a loss that apparently extends to Otto, since he can't keep his young wife satisfied.

In addition to playing Otto, Jon Hall was the director of the project, and the only major name in the cast aside from that of a musical credit attributed to Frank Sinatra Jr. In a sense Otto is the "Hamlet" of the story, but if so he's Hamlet I, still a king in theory but also being cuckolded by a wife with a wandering eye. In addition, his ambition to see his son take his place in the family business is threatened by Richard's smell-the-roses attitude after his brush with death. Thus the transgressions of his young wife and the young people dancing on the beach become the same target in his mind, just as all the things that bugged Henry Jekyll led him to transform into Mister Hyde and take bloody vengeance.

MONSTER doesn't really exploit any of these "treasure-tropes," though, and given that Hall is said to have financed the picture, it's surprising that he didn't have his part built up more. Did he find himself in the unenviable position of doing a reverse-take on the William Asher "beach films" of the time, but with the older man being a figure of terror instead of a bemused elder? Or maybe he just thought that the cavorting beach girls were the film's main attraction.

The world will probably never know, or even care.

Posted by Gene Phillips at 12:33 PM
Email ThisBlogThis!Share to TwitterShare to FacebookShare to Pinterest
Labels: bizarre crimes (u), outre outfits (u), phantasmal figurations (u), the uncanny