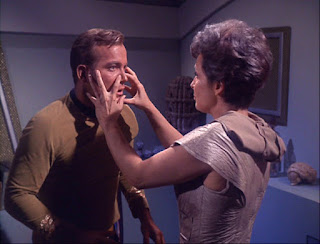 (NOTE: as I write this, I'm considering making the attempt to do a episode-by-episode review of Classic Trek, thanks to a current re-broadcast of unedited episodes. Whether I manage to keep it up will be anyone's guess.)

"The Man Trap" -- credited to writer George Clayton Johnson, albeit with important story-input from another writer, Lee Erwin, as well as from series-producer Gene Roddenberry-- is almost never cited as a fan-favorite. It may suffer in some fans' eyes from a general lack of humor, or the fact that it is essentially a "monster on the loose" story, rather than being overtly concerned with a high-flown sociological message. In truth, though, "Man Trap" is one of the most thoroughly mythopoeic episodes in the series.

For the first eight episodes in TREK's production schedule, there are few overt references to the politics of the Federation's outer-space empire. (The Romulans appear in the ninth episode produced, though the show aired as Episode 14.) The monster in "Man Trap," however, can be interpreted as the ultimate "other" that threatens the integrity of the human empire. The creature-- given no name in the story, but dubbed "the Salt Vampire" by fans-- poses such a threat in the same way that older civilizations are often perceived as threats to younger, current ones. In contrast to the tribes exterminated by the various empires of the 19th century, the "tribe" of the Vampire apparently perishes from natural causes. But even though the Federation-- and by extension, all the crewmen of the Enterprise-- are innocent of killing the Vampire's people, a sense of Conrad-esque guilt hangs over them anyway. The creature is compared fulsomely to two species of animal whose populations suffered from humankind's advance: the passenger pigeon and the American buffalo. The allusion to the buffalo is repeated three or four times in the story-line, and so suggests a further allusion to the chaos wrought upon numerous Native American tribes due to the advance of the American Empire-- whose ethical outlook forms the bedrock for the fictional Federation.

Captain Kirk and his crew venture to the planet M-113 for a mission that sounds rather niggling for a mighty star-vessel: to conduct a medical examination of two archaeologists, who are currently the only occupants of a planet that once harbored a now-extinct race. If there was a living race on M-113, it would be easy to view the two scientists' assignment as an "outpost of empire." But since the Federation believes that the planet's native race is dead, the archaeologists' mission can only be rationalized as seeking knowledge for its own sake-- though, in keeping with a myriad of horror-movies tropes, even well-intentioned inquiries into the past can conjure forth death and confusion.

The two archaeologists, husband Robert Crater and wife Nancy, aren't the only ones interested in the past. The man set to perform their medical exams, Enterprise-doctor McCoy, was romantically entwined with Nancy twelve years ago, and it's clear from his conversation with Captain Kirk that the doctor still carries a torch.

However, from the first it's apparent that Nancy isn't changeable only in terms of her emotions. McCoy sees her as the same youngish woman he once knew, as if she has not aged at all. Kirk, expecting to see a woman of advanced years, sees what he expects, while a disposable Redshirt makes the error of thinking about a woman he knew from "the Pleasure Planet," and so sees Nancy as a totally different young woman. The crewman's concupiscence leads to his death, as "Nancy"-- actually the last survivor of M-113's otherwise extinct race-- lures him away from the others and kills him for the salt in his body. However, because the Vampire hopes to graduate to other prey aboard the Enterprise, "Nancy" tries to convince Kirk and McCoy that the crewman died from eating an alien planet. Significantly, the alleged poison-plant is named "Borgia," probably in honor of Lucrezia Borgia, the 15th-century Italian noblewoman who became mythologized as a master poisoner and a symbol of feminine rapacity.

Aboard the Enterprise, McCoy rules out the plant as the cause of the crewman's death. Kirk and other crewmen descend to M-113 once more to interview Crater and his wife, but neither gives Kirk any satisfactory answers. Vampire-Nancy kills all three of the crewmen, but conceals the body of one of them, using her chameleonic powers to assume his appearance and thus infiltrate the ship's crew when the contingent beams up, supposedly leaving both Crater and his wife behind.

Crater later tells Kirk that M-113's supply of salt ran out, and when he and his wife encountered the last survivor of the Salt Vampire's race, the creature killed Nancy for her body's salt. It's never clearly established how Crater survived his continued contact with the Vampire for the remainder of the two years he spent on M-113, but it's possible that he did so by doling out small supplies of artificial salt. If the Vampire had managed to survive for two years on minimal amounts of the substance she needed, this might go toward explaining the Vampire's behavior once she's on the ship. Faced with a wealth of salt-filled bodies, the Vampire endeavors to get one of the crewpersons alone-- and this time, she chooses to stalk two female possibilities. The Vampire fails to get Yeoman Rand alone, and it even garners some unwanted attention when a rare plant in Sulu's garden shrieks in the creature's presence. The monster then waylays Lieutenant Uhura, assuming a form apparently derived from someone Uhura knew before, since Uhura almost recognizes "him"-- and the Vampire even demonstrates some telepathic capacity, given that she flawlessly imitates Uhura's own native Swahili language. But the Vampire's own hunger undermines her masquerade, and Uhura is only saved by the accidental intrusion of other crewpersons.

Kirk and Spock investigate the planet once more, and find the body of the crewman who supposedly beamed up with them earlier. They take Crater prisoner and beam him to the ship. Meanwhile the Vampire, apparently hoping to use McCoy as she used Crater, places him in a hypnotic sleep-trance and masquerades as McCoy. This allows the monster to sit in on the very conference in which Kirk and Spock attempt to force Crater to reveal his secrets. Crater gives them everything they want, but will not help them find the Vampire-- an amusing scene, since he's looking right at "her" as he says this. Kirk accuses Crater of having used the Vampire to give him his own narcissistic cast of companions, but what goes unsaid is that Crater has actually committed the sin that an earlier culture would've called "going native." Crater pays for his complicity, though: "McCoy" takes Crater away, ostensibly to administer a truth serum. Then the Vampire kills her human companion (and possible lover) so that he won't rat her out. As the ship's security procedures tighten the net around the shape-changer, she takes refuge with McCoy again-- leading to a final confrontation in which the doctor, the one man most within the Vampire's thrall, must prove himself by dealing the fatal blow.

It's fascinating that, by the grace of an arbitrary schedule, Captain James Kirk's first opponent would be an incarnation of female mystery and vampiric hunger-- and a shape-changer, just like the opponent he faces in "Turnabout Intruder," the final episode of TREK's third season. To the extent that the Federation is also a creation of a male-centered hegemony, all that is female is as much an "other" to it as the scion of a dead races. Early in the episode, Lieutenant Uhura playfully tries to evoke some quasi-romantic emotion from Mister Spock-- naturally, without any result. She also assumes a feminine attitude of censure when they both hear an announcement that someone in the initial landing-party has died, and Spock remains at his post, a typical "repressed male" refusing to rush out and find out if it's his friend Kirk who has perished. At the same time, Spock is the exception that proves the rule: prior to seeing the Vampire stalk the yeoman, a couple of male crewmen ogle her from afar, fantasizing about having her "serve" them-- which, I presume, is still a little better than wanting her to be a "serving," as in a meal.

As I re-watched the conclusion, it occurred to me that some viewers might taken issue with the doctor's destruction of the Vampire. Might he not have stunned her, in order to preserve the last survivor of a vanished race? I don't know if this possibility occurred to Roddenberry and the other writers. To me it seems likely that if they thought of it, they would have dismissed the notion in favor of providing the audience with a violent catharsis. After all, the Vampire wasn't just a threat to a just and proper empire: it was also a creature that apparently had no difficulty with devouring the members of another intelligent species without mercy. The finished script gives no well-defined reason as to why the Vampire's kindred dies out. But since the Vampire's hand-suckers give her the power to draw salt out of living bodies, might it not be possible that her people normally sucked salt not from natural deposits, but from other living creatures on M-113? If this was the case, then perhaps the creatures on whom the Vampires preyed were over-hunted, and thus rendered extinct, thus leading to the inevitable conclusion that the Vampire Race died as a result of its own arrogance. Thus, even though in the episode's final moments Kirk meditates on the fate of the buffalo-- to which the Vampire has been explicitly compared-- perhaps the Vampires themselves were more in the nature of "buffalo hunters" who killed themselves as the result of their own excesses. Certainly this would be a good cautionary tale for any future builders of empires...

Posted by Gene Phillips at 4:28 PM
Email ThisBlogThis!Share to TwitterShare to FacebookShare to Pinterest
Labels: combative dramas, the marvelous