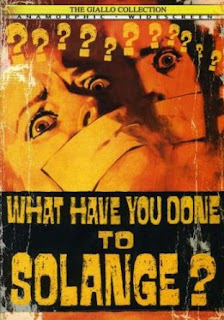 A few reviewers have commented that this Italian-West German giallo may have had some influence on the growth of the American slasher-genre in the 1970s. Of course the key trope of SOLANGE-- in which women are obsessively stalked by a serial killer-- was nothing new even in the early 1960's.

Director and co-writer Massimo Dallamano started out his career as a cinemaographer. This certainly explains why SOLANGE looks beautiful even when very ugly things are taking place. However, a lot of cinematographers who take up the director's profession don't evince a strong sense of story-- and so it is with SOLANGE, despite being based loosely on one of Edgar Wallace's popular thrillers, THE CLUE OF THE NEW PIN.

The viewpoint character is Rosseini, a married teacher who's having an affair with one of his teenaged female students. While the two of them are canoodling in a boat, they float past a forested area ashore, and the student sees the flash of a knife. Sure enough, the next day a young woman, also an attendee at the girls' college where Rosseini teaches, is found dead. As more girls die, police attention turns to Rosseini. He and, ironically enough, his betrayed-but-still-loving wife must play detective and find the real murderer.

While no one expects the characters of a giallo to be especially well-rounded, those of SOLANGE are unusually flat, while the mystery proceeds in a plodding fashion. Dallamano is so concerned with pretty surfaces that the main attraction of the subgenre-- gruesome yet imaginative murders-- is not developed. I won't reveal the film's one ingenious "reveal" at the end. But I will note that SOLANGE departs from the general PSYCHO-pattern of the killer who slays out of sexual frustration, and even spreads some of the evil deeds to the female of the species. However, the script is too slack to suggest the level of societal corruption one finds in the superior giallo films.
Posted by Gene Phillips at 1:53 PM
Email ThisBlogThis!Share to TwitterShare to FacebookShare to Pinterest
Labels: bizarre crimes (u), the uncanny