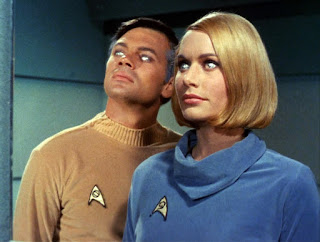 The third broadcast episode of STAR TREK—actually the show’s second pilot, after NBC passed on the first one— stand as one of the best 20th century treatments of the Greek concept of hubris, of the idea that the gods would punish men whenever they stepped outside the bounds of mortal limitations. Of course Roddenberry, a professed atheist, patently did not believe in gods. However, it’s been said that in wartime there are no atheists in foxholes. Similarly, in the art of writing there are, so to speak, no atheists amid plot-holes. Thus even a writer who doesn’t believe in gods has to create hem, in order to fill the symbolic voids in his narrative.

As the episode begins, the Enterprise is about to cross into unfamiliar terrain: an area “outside the galaxy.” Within a purely materialistic view of the cosmos, there should be no “forbidden worlds” in outer space. Yet Kirk and his crew—which does not yet include either McCoy or Uhura-- encounter evidence that a previous ship, the Valiant, has suffered destruction while attempting the same feat of extra-galactic exploration. According to Spock’s analysis of the data from a recording-unit, the Valiant encountered some sort of “storm” that affected members of the crew adversely. In addition, Spock learns that before the ship’s captain initiated a self-destruct sequence, he was intensely researching information on human ESP potentials. Nothing daunted, Kirk refuses to be cowed by the Valiant’s fate, and orders the Enterprise to cross into the unknown galaxy. The ship encounters a field of force with contradictory tendencies—"deflectors say that something’s there; sensors say there isn’t." The force-cloud causes a massive breakdown of the ship’s power units, and two crewpersons are struck unconscious: helmsman Gary Mitchell—a close friend of Kirk from their days in Starfleet Academy—and psychologist Elizabeth Dehner. Dehner seems to recover without ill effect, but Mitchell’s eyes turn silver. Soon it will emerge that both of them possess high ESP potential, and that the mysterious cloud has boosted that power to godlike levels.

Though Mitchell and Dehner are the antagonists with whom Kirk and his crew will contend, the finished script gives the audience little detail about them. They have just one exchange on the ship’s bridge, suggesting that they know of one another but are not friendly. After Dehner makes a remark about studying new populations, Mitchell puts a sexy spin on her scientific orientation, asking her if she wants to improve the breed. She says that “that’s more in your line—and I do mean ‘line.’” He mutters to a friend that she’s a “walking freezer unit,” thus establishing their personas as “oversexed playboy” and “undersexed female professional.” In addition, when the cloud first starts to affect the ship, Mitchell is seen briefly holding hands with a female crewperson. This suggests that she may be his current conquest, though she has no substantive role in the story.

During Mitchell’s recovery in sick bay, the script expands on his character in conversation with his old friend Kirk. Their badinage reveals that even as a normal human Mitchell possesses a manipulative streak, which will have dire consequences for a man given the power of a deity. As his psychic abilities increase exponentially, it becomes evident to Kirk and Spock that their former colleague has become alienated from humanity. Spock argues that Mitchell’s inhuman power makes him a threat, while Kirk sentimentally wants to find a way to save his old friend. Dehner, for her part, has become infatuated with Mitchell the victim, as she never was with Mitchell the player.

In contrast to many subsequent scripts in which Spock’s remorseless logic proves insufficient to provide solutions—notably “The Galileo Seven”—Spock is proven to be incontrovertibly right. Even Mitchell agrees, darkly predicting a dire fate for his former kindred when he states that “mankind cannot survive contact with a race of true espers.” Up to this point no one has been talking about Mitchell propagating a new and more deadly species, for he seems to be the Adam of a new species, without an Eve in sight. But as Mitchell breaks free of his prison on the Enterprise, Dehner’s own boosted potential comes to the fore.

The Adam-Eve parallels are made explicit when the divine pair descend to a planetoid, one on which Kirk had planned to strand Mitchell. It’s not entirely clear why they don’t use their powers to either seize control of the Enterprise or to destroy it. The closest thing to an explanation occurs when Mitchell states in an earlier scene that he’s not quite sure what to do with his power yet, though he’s clearly already begun to think of himself as a god. With a wave of his hand Mitchell causes the barren earth of the planetoid to turn into a Garden of Eden. The psychic gods even eat from a plant with apple-like fruit, sealing their resemblance to the original couple of the Bible. Kirk, feeling guilty for having failed to obey the logic of command, pursues the divine couple, hoping to slay two gods with no more than determination and a phaser-rifle. Mitchell overcomes Kirk with ease, but Kirk manages to sway Dehner to his side. He dispels her vision of divine ascension with an appeal to Freudian basics: “You know the ugly, savage things we keep buried; that none of us dare expose. But he’ll dare! Who’s to stop him? He doesn’t need to care!”  Dehner, her loyalty to the human race reactivated, uses her powers to drain those of Mitchell. This makes possible a knock-down drag-out battle in which Kirk manages to slay Mitchell, moments before Dehhner perishes from her fight with Mitchell. As in “Man Trap,” the story ends with the heroes briefly mourning the victims of human progress.

The original STAR TREK is replete with many irresponsible gods. Some of them merely abuse their powers out of a sense of caprice, as in “Charlie X” and  “The Squire of Gothos.” Mitchell is a more profound threat. According to Kirk’s rhetoric, human beings keep one another in balance via a social contract: they “need to care” what others think because all humans have roughly the same power to retaliate against one another. Mitchell’s Olympian indifference to human culture is assumed to be the seed of tyranny or even genocide. Indeed, Kirk’s most persuasive argument to Dehner dispels the myth of Adam and Eve, for the captain argues that “there’ll only be one of you in the end—one jealous God!” Kirk successfully convinces “goddess” Dehner that her prospective mate is not Adam but Yahweh, who will have no other gods in his presence, either before or beside him. It’s an interesting turnabout in the script, that while Spock has counseled that Kirk must not forsake his duty out of feeling, the only thing that saves the Enterprise—and implicitly all of humanity—is that Kirk is able to spark empathetic feeling in a would-be goddess. The TREK narrative is full of women whose basic function is be temptresses or vampires, but Dehner provides an interesting contrast: the goddess who sacrifices herself out of her feminine sensitivity.

Posted by Gene Phillips at 1:58 PM
Email ThisBlogThis!Share to TwitterShare to FacebookShare to Pinterest
Labels: combative dramas, the marvelous