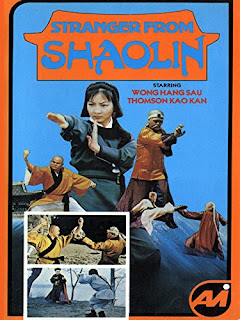 This low-budget chopsocky depicts the avenging arc of Yim Wing Chim, a young woman left homeless when an evil agent of the conquering Manchu Dynasty kills off her whole family. She desires vengeance, and seeks out the Shaolin monastery to get the training she needs. One little problem: the monastery is only for guys, who typically practice their kung-fu moves with their shirts off.

Fortunately for Yim, the abbot suspects her identity and gives her a special form of training apart from the other students, so that she doesn't have to reveal herself as a girl. One of the young male students figures out the truth and becomes her chief helper, though no actual romantic complications ensue. For those interested in the female-centered martial arts discipline known as "wing chun," Yim gets some of this training as well as the film wends its routine way toward vengeance on Kang, the Manchu's chief hit man.

Kang is the film's only source of metaphenomenal content. Like some of the other kung-fu characters I've mentioned in previous reviews, he has an uncanny "body-hardening" power, so much so that Yim can't cut his flesh with a sword. In addition, he uses his long hair-queue as a weapon to confuse or entangle people. The Shaolin abbot explains his power as the result of this Taoist monster drinking "children's blood" to gain more power-- a rare trope in my experience, as most such martial "powers" are usually explained through breath control and so on. Maybe the long forgotten scriptwriter had a mad-on for Taoists?
Posted by Gene Phillips at 1:18 PM
Email ThisBlogThis!Share to TwitterShare to FacebookShare to Pinterest
Labels: combative adventures, superlative skills (u), the uncanny