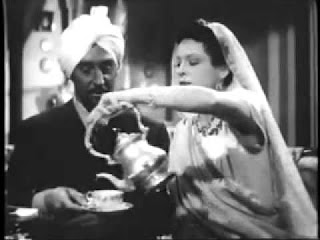 "Driven [to suicide]? That *sounds* like a woman, doesn't it?-- Doctor Watson, THE SPIDER WOMAN.


THE SPIDER WOMAN remains one of the best of Universal's "Sherlock Holmes" series. It borrows liberally from different Conan Doyle stories, so that it can't be regarded as a straight adaptation, but it does so in order to give the cinematic Holmes his first formidable female opponent-- "a female Moriarty," as Holmes puts it.

Gale Sondergaard isn't even seen on-camera for the first twenty minutes of the movie, but her "cruel, feline" nature is suggested by the widespread menace of the "pyjama suicides." Holmes has left London on vacation, but he tells a worried Watson that he's done with crime because of a serious illness. And as if to reinforce the extent to which the forces of evil are now in control, Holmes appears to die, and Watson spreads the news of his beloved friend's demise.

Of course, it's a ruse, directly borrowed from Doyle, and if anything, director Neill's depiction of Watson's reaction to the detective's trick is better than the one in the Doyle story. Holmes is almost psychic, not only in knowing that the schemer behind the apparent suicides is female, but also that she's too cautious to reveal herself unless she thinks London's foremost detective is out of the picture.

Holmes uses his disguise-mastery to assume the role of an Indian prince, in order to lure out the mastermind. Swanky Adrea Spedding (Sondergaard) shows up to make the prince's acquaintance, yet after one or two encounters, she shows that she has much the same astuteness as the Great Detective. She tests her new conquest, learns that he's an impostor, and instantly intuits not only his identity, but the fact that Holmes' death was greatly exaggerated.

Twice in the film the "Spider Woman" (as Holmes names her) makes attempts on the lives of Holmes and his partner-- first, with a poisonous spider, and second with a device designed to time-release a poison gas. In addition, she also makes use of a pygmy who poses as a young boy. Between the use of malefic animals, poison, and an exotic native, I found myself lumping her in more with Fu Manchu than with Moriarty-- which is all to the good, since a female knock-off of Moriarty wouldn't have been nearly as appealing.

There are dozens of fine character touches throughout the film, which I won't bother rehashing, The most interesting, though, is the ending. After Spedding and her thugs have been handed over to the bobbies, one half expects Holmes to deliver some pontificating speech. Instead, as he and Watson move through the gaiety of a carnival, Holmes soberly reflects that at any time, someone could take their lives in such a chaotic atmosphere. It's a mordant touch, suggesting that even though the Spider Woman has lost her battle, what she represents-- Death itself-- will soon win the war.

Posted by Gene Phillips at 3:42 PM
Email ThisBlogThis!Share to TwitterShare to FacebookShare to Pinterest
Labels: bizarre crimes (u), diabolical devices (u), the uncanny