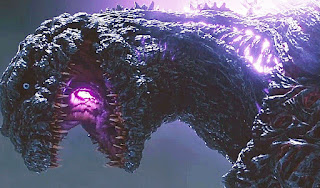 
My visceral response to SHIN GODZILLA is "too many bureaucrats, not enough Godzilla."

Intellectually I can respect that SHIN is a new take on a familiar set of tropes-- one of which is a trope that's barely been used since the original GODZILLA, KING OF THE MONSTERS. The first film in the long-running franchise is all about Godzilla fighting against the military might of Japan, and nothing else, and SHIN GODZILLA follows this template. In contrast, every Japanese-made Godzilla film since the original has followed the template of the second outing, GODZILLA RAIDS AGAIN. This sequel was the first time the Big G was shown battling another colossal monster, and as I argued in my review, this served to divert some of the violence away from human targets:

One immense benefit of the battle between the two creatures is that their conflict distracts from the audience's expectations of seeing Osaka ravaged as Tokyo was in the first film.  That said, their conflict also has some of the same ego-boosting effect seen in KING KONG: when Godzilla triumphs over the formidable Anguirus, he proves that he is "top lizard" much as Kong did in defeating various dinosaurs.  Thus Anguirus is in some sense a stand-in for Osaka: the extended-- and exciting-- wrestling match of the two colossi takes the place of a more expensive general destruction of the city.  Though this maneuver may have had its roots in economics, the "monster duel" would become one of the central tropes of the Godzilla franchise, becoming far more important than the trope was in the original KONG or in most of its recapitulations.


No other monsters appear in SHIN, nor are there invading aliens or scientific madmen. If anything, SHIN follows the "humans fighting giant monster" pattern of the giant monster-films of the 1950s, particularly the one that purportedly inspires GOJIRA, 1953's THE BEAST FROM 20,000 FATHOMS.  In fact, since the new Godzilla takes place in modern times, the script, written by co-director Hideashi Anno, is obliged to set aside the traditional origin, in which Godzilla is a prehistoric creature awakened and given super-powers by atomic testing. Still, "Shin Godzilla" is birthed by a more modern concern; that of the dumping of radioactive waste in the oceans. Thus the new Godzilla can't represent the horrors of Hiroshima and Nagasaki, though he can incarnate a looser conception of the hubris of modern man-- in this case, a creature that presumably starts as some modern animal, yet thanks to the radioactive waste, goes through a series of macroevolutionary transformations until it reaches the apex of its creation

Like the old 1950s SF-flicks, SHIN's narrative spends a lot of time following the activities of assorted humans as they strive to cope with the advent of a monster beyond their understanding. As in the older flicks, most of the humans rate, at best, as passable in terms of their characterization. Yet Anno's script is endlessly fascinated with the real-world consequences of the monster's invasion: devoting painstaking details to the ways in which government employees second-guess one another even in an emergency, or wrangle about details, or even concern themselves with the social status of their scientific experts. The two most developed viewpoint characters, Japanese functionary Rando and U.S. envoy Kayoco, are young politicians who are intensely aware of their career opportunities even in the midst of combating a giant monster.

One trope that SHIN develops far more than any earlier Godzilla film is that of the "pseudo-science rationalization." From the first film onward, entries in the Godzilla franchise barely bother to explain any of the giant monsters in terms of then-current science. However, Anno's script makes it a major concern for Japan's scientists to dope out Godzilla's nature as a means to capture/destroy the creature. These cosmological myths, as well as the attempt to make the mutant symbolize all of unpredictable nature-- and maybe even of God-- are give SHIN GODZILLA a better than average mythicity.

As for Godzilla himself, the new version is tolerable but far from a match for the original classic design, or even the re-design for the so-called "Millennium Series."

Posted by Gene Phillips at 3:03 PM
Email ThisBlogThis!Share to TwitterShare to FacebookShare to Pinterest
Labels: combative dramas, the marvelous