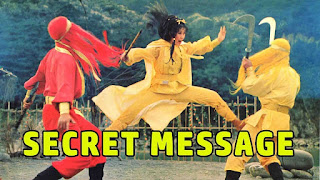 
Though this chopsocky is probably best known under the title NINJA MASSACRE, there are no ninjas in it, given that it all takes place in medieval China. (I'll admit there is one clan that dresses up with black masks over their faces, but still-- no ninjas.) The alternate title SECRET MESSAGE is much better, since the main McGuffin here is a secret containing an esoteric kung-fu technique, which a bunch of martial arts clans want to possess, implicitly for evil reasons.

In fact, the heroine Chi Fong (Doris Lung Chung-Ehr) starts out as just another ruthless leader of a criminal group called the Poison Clan. She and her all-girl warriors stage a raid on the Beggar Clan to gain their secret scroll. However, another clan, the Iron Bloods, gets there first, slaughtering all the Beggars. The only copy of the scroll is tattooed on the back of an infant, so Chi Fong fights the leaders of the Iron Bloods. He flings some powder in her face that permanently blinds her, but Chi escapes with the infant. Her experience evidently causes Chi to do a volte-face, for despite her blindness she somehow manages to set up a small cottage in a rural valley far from society. There she proceeds to raise the babe Sao Shan as her own child, schooling him in kung fu. Since she can no longer read, one assumes that she has no access to the tattoos, though she does a sterling job of learning how to live and fight without her sight. Later, when her Poison Clan sisters seek her out, she refuses to return to her evil ways, wanting only to be a surrogate mother to Sao Shan.

However, every other clan in the territory pursues Chi for the precious scroll, and most of the film consists of her battles against them. One clever group tries to nullify her only sensory guide, her hearing, by attacking her with the use of bells, but Chi even beats them.

Two more personal adversaries also appear: Len Chung, Chi's old lover, who just wants to get close to her in order to steal the scroll, and General Lung, who's figured out that the young boy is really the last of the Beggars, and therefore Lung's nephew. But the melodrama definitely takes second part to the action sequences.

One sequence keeps MASSACRE from being fully uncanny: a bizarre sequence in which the Poison Maidens conquer another clan by whipping around their sashes so fast that they create a miniature tornado.

Posted by Gene Phillips at 2:49 PM
Email ThisBlogThis!Share to TwitterShare to FacebookShare to Pinterest
Labels: combative adventures, outre outfits (u), superlative skills (u), the marvelous