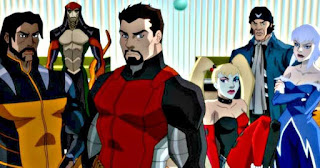 
Whatever minor virtues one may find in the shabby, mishandled live-action SUICIDE SQUAD, its greatest benefit to fans of superhero videos may well be that it paved the way for HELL TO PAY. In fact, while the original SUICIDE SQUAD had its fair share of nasty moments-- par for the course for a feature about career criminals working for the U.S. government-- HELL has an advantage over the comic book. The comic had to allow many of its villains-- both those in the Squad and their opponents-- to keep on living, so that other DC authors could use them as needed. But director Sam Liu and writer Alan Burnett are able to kill cherished characters right and left, all to the effect of giving this OAV a justifiable air of grimness and grittiness.

The premise of HELL only works if one buys into the idea that many, if not all, characters in the DC Universe believe in the reality of both heaven and hell. Amanda Waller, the ruthless C.O. of the Suicide Squad, orders her crooked charges to fetch her a special "Get Out of Hell Free" card, precisely because Waller believes that her many "Black Ops" activities on behalf of the U.S. will someday place her in the depths of perdition with the rest of the sinners. Thus six members of the Squad-- Deadshot, Captain Boomerang, Copperhead, Killer Frost, Bronze Tiger, and Harley Quinn-- must go in search of the supposedly mystic device. If they fail, Waller can activate explosive chips in their skulls so that the ex-villains will lose their heads. If they succeed-- and they have considerable opposition from such heavy-hitters as Zoom, Vandal Savage, Blockbuster and Silver Banshee-- the Squad's only reward will be a little time commuted from their jail sentences, while the "outta hell" card falls into the hands of someone who doesn't deserve it.

HELL is a good example of hardcore adult-oriented pulp, with loads of murderous violence and a dollop of suggestive sexuality, particularly from the asides of Harley Quinn, though this version is not nearly as funny as Margot Robbie's take on the character in the live-action film. However, HELL's best feature is its renunciation of the live-film's ghastly take on Deadshot, of which I wrote:

I try not to be offended when a film drastically revises a favorite character. But in place of Ostrander's driven, trying-to-be-affectless killer, Ayer substitutes a one-dimensional "I'll slap you up side the head" badass with no redeeming character points. Possibly this version came into existence purely to showcase the limited talents of Big Name Star Will Smith. However, whereas Hugh Jackman sold audiences on the appeal of Wolverine by sheer talent, Smith simply coasts on playing a character-type he's already done before.


HELL does keep one trope from the 2016 flick: Deadshot has a teenaged daughter who never existed in the comics. But, joy abounding, the dumb "street-smart" Will Smith version is dumped in favor of something closer to the comics-version: cynical, yet not as incapable of feeling as he'd like to be. 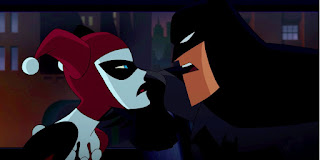 Sam Liu also directed BATMAN AND HARLEY QUINN, but the script by Bruce Timm and Jim Kreig emulates the style and content of Timm's signature animated series BATMAN (1992-95). Given that Timm concocted Harley Quinn for this series, it's a given that she has the same appearance and verbal characterization, as well as her "ambiguously lesbian" relationship with gal-pal Poison Ivy.

Batman and his former sidekick Nightwing team up once more when they learn that Ivy has joined forces with the Floronic Man, and that the villains plan to obliterate humanity in order to give the world back to the Plant Kingdom. But the heroes need the expertise of Harley to find her old buddy, and thus, amid much prickliness, Harley is enlisted to fight on the side of the angels.

BATMAN AND HARLEY QUINN is an enjoyable romp, though some of the action-scenes prove repetitive, as do the inevitable conflicts between uptight Batman and his clownish co-star. On the good side, Harley and Ivy have a really nice girl-fight, and Harley gets some really good lines, though not as many as the scriptwriters may've thought. The character "Swamp Thing" makes a cameo appearance for the sake of a rather lame joke.