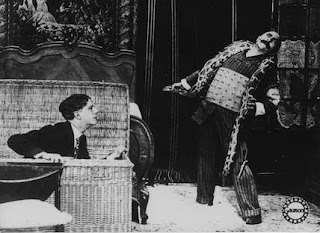 
Having finally read the first of the Fantomas books, reviewed here, I then made it my business to check out at last the five-part serial by Louis Feuillade, refurbished and packaged by Kino with a commentary by film-scholar David Kalat.

Given that I wasn't all that mesmerized by some of the earlier Feuillade serials, such as the 1915 LES VAMPIRES, I didn't exactly hurry to seek out FANTOMAS, though it seems as if I've been hearing rapturous accolades ever since I started reading early film-criticism in depth. Nevertheless, I attempted, as much as possible, to watch the serial with an open mind, keeping in mind some of the virtues I'd found in the novel.

Each of the serial's five parts is based on a separate novel by authors Allain and Souvestre. Critic Kalat informs me that the novels were so widely popular in France that most of the audience knew what happened in them, and thus Feuillade could pick and choose what elements he filmed, assured that the audience already knew what happened. That said, I found it surprising that IN THE SHADOW OF THE GUILLOTINE, Feuillade's adaptation of the first book, omits some of the prose work's best stuff. I fully understand why a filmmaker would eschew the novel's initial "is Fantomas real or not" approach, and why Feuillade begins his adaptation by having Fantomas, in one of his many disguises, appear before one of his victims. But the director gives only cursory attention to the serial's two viewpoint characters, the police inspector Juve and his young reporter-friend Fandor, whose interwoven history is so important to the novel. Other scenes from the novel appear in helter-skelter fashion, and one of the more shocking scenarios-- in which an innocent man is killed by the guillotine-- is understandably altered to spare the victim's life. The villain's pursuers never lay hands on the evildoer, though Juve does daydream about meeting Fantomas clothed, as in a famous illustration, in evening-wear and a domino mask.

JUVE VS. FANTOMAS is the best of the five segments, which are largely independent of one another, aside from the trope of Fantomas escaping each time. For the first time, Fantomas is seen in a sort of "costume," an all-black outfit with a dark hood like that of an executioner. One of the villain's more exotic crimes involves unleashing a python on his victims, and Juve manages to both anticipate and counter his foe's snaky attempt on his life. The sequence ends with the apparent deaths of both Juve and Fandor when Fantomas blows up the building they're in-- the only true cliffhanger in the set, and the only episode I found effectively atmospheric.

THE MURDEROUS CORPSE is one of the duller entries. It opens with the conceit that only Fandor escaped the explosion, though, if it's true that everyone knew the novel, then everyone back then would've know that Juve too survived, concealing that fact in order to infiltrate the villain's gang with the aid of yet more clever disguises.This time the main crime involves Fantomas making gloves out of a dead man's hand in order to leave only the dead man's fingerprints behind. This episode features the only instance in which Fantomas commits an on-camera act of violence: decked out in his executioner's costume, the evildoer comes up behind a French cop and strangles the cop with a sash.

FANTOMAS VS. FANTOMAS-- This is the second-best episode, helped out by many sequences at a colorful costume ball. The opening shows Juve reacting to the imprecations of the local newspapers, to the effect that because he Juve has not caught Fantomas, then this can only be because-- shades of J. Jonah Jameson-- Juve actually IS Fantomas. There's also the complication of a famous American detective who comes to Paris to capture the villain, though since the guy sports the risible name "Tom Bob," the viewer probably doesn't anticipate his showing up Juve. There's an antic sense of fun when no less than three people dressed like Fantomas attend the ball, not counting Fandor, who has a similar but not identical outfit.

THE FALSE MAGISTRATE is the last episode, and the one most affected by missing or decayed footage. It's some malarkey about Fantomas stealing some jewels, and though this time Juve and Fandor actually lay hands on the villain this time, he escapes them by the ingenious method of wearing a pair of fake arms. How he knew he's need fake arms before he was caught is anyone's guess.

David Kalat correctly anticipates that many viewers may not take to Feuillade's underplayed, almost elliptical method of story-telling. He makes an interesting but not convincing argument about how Feuillade pioneered an approach to pulp fiction called "fantastic realism." I just think the guy was a sloppy storyteller, and remain unimpressed by his alleged genius. I'm sure, however, that his approach to the wild pulp-content of the Fantomas novel impressed the heck out of many intellectuals of the time, particularly Rene Magritte, since the underplaying of melodrama is similar to "high art's" attempts to distance emotion and affect. Still, Kalat's enthusiasm for the material is somewhat infectious, and I appreciate his mini-history of the Fantomas character in various media, as well as the character's influence on other fictional figures.

Posted by Gene Phillips at 3:45 PM
Email ThisBlogThis!Share to TwitterShare to FacebookShare to Pinterest
Labels: bizarre crimes (u), diabolical devices (u), outre outfits (u), the uncanny