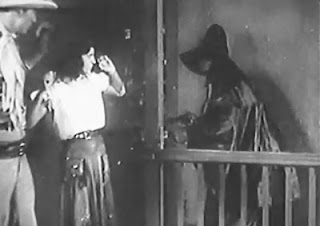 
THE PHANTOM OF THE WEST is a fairly lively western sound serial. Tom Tyler is a cowboy out to avenge his father's death at the hands of a gang ruled by "the Phantom," a mysterious figure in a black cloak and slouch hat.  This Phantom doesn't have any special weapons, though for some reason he sends message to his enemies with special darts that make a whistling sound. (This device was recycled three years later for MYSTERY MOUNTAIN.)

It's pretty much standard western action. Tyler would go on to face yet another "Phantom menace" in 1933's THE PHANTOM OF THE AIR, and then followed that up by playing THE PHANTOM.  Of minor interest is a scene in which Tyler's character detains the horse-riding heroine (Dorothy Gulliver) for questioning, and she smartly responds by smacking him with her riding-crop. She doesn't do much else in the reminder of the serial except be menaced by the Phantom, though.

There's also a minor mystery to a group of masked riders who may or may not work for the Phantom, and a thoroughly unfunny comic relief with a stuttering gimmick. 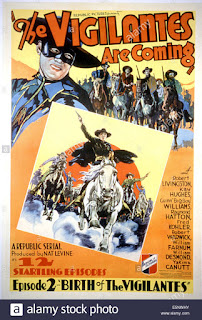 Republic Studio's THE VIGILANTES ARE COMING seems very much like a Zorro manque, though apparently no one had done a Zorro film since DON Q, SON OF ZORRO, and the next one, THE BOLD CABALLERO, would appear about four months later from the same studio, in December 1936. Perhaps someone sought to test the waters for Zorro-like action before actually taking the step, for by next year Republic launched the first of its five "modern Zorro" serials, starting with 1937's ZORRO RIDES AGAIN.

Unlike the later serials, VIGILANTES does take place in 1844 in Mexican California, which is fairly close to the milieu of the original Zorro stories. However, all the major characters are Caucasians with no Hispanic heritage, including the main hero, who takes on the masked identity of "the Eagle."  Here the threat is that of a contingent of Russians seeking to colonize California for its rich resources. However, the title's emphasis on vigilantes may remind some of the original Zorro novel THE CURSE OF CAPISTRANO, which mentions Zorro's legion of aides far more than do the two silent films. Again, the action is decent but unmemorable, and star Robert Livingston proves rather bland, doing somewhat better with the real Zorro in the feature film BOLD CABALLERO. 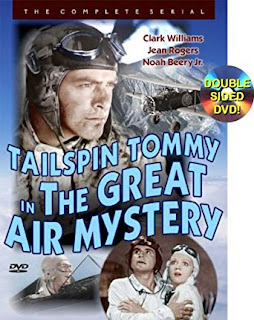 Finally, there's the second and last of the TAILSPIN TOMMY serials, TAILSPIN TOMMY IN THE GREAT AIR MYSTERY.  These were the first two sound serials to be adapted from a comic-strip franchise, and their relative success probably paved the way for the same studio, Universal, to do FLASH GORDON a year later.

Aside from that minor place in serial-history, GREAT AIR MYSTERY is just another air-adventure serial. in which the characters generally project a rather "gosh-wow" attitude. As in VIGILANTES the heroes, get involved in attempt to head off an evil group of schemers from plundering the oil reserves of a fictional South American country. Though Tailspin Tommy (Clark Williams) is the senior pilot, he and his buddy Skeeter (Noah Beery Jr.) are treated as equals, there being no explicit comedy relief here. In addition, both partners have girlfriends who are skilled pilots and who make no bones about flying into danger alongside the guys. (One of the two characters is played by Jean "Dale Arden" Rogers.)

The baddies are pretty bland, though there's are two masked mystery-men here-- the Eagle, who ends up being on the good guys' side, and Double X, who is more briefly seen helping out the villains. Both men wear oddly patterned flight-helmets but are otherwise uncostumed, and though the Eagle's plane is supposed to be a breakthrough model, it can't do anything that other planes can't. I find that these masked pilots don't really have the bearing of either masked heroes, like that other Eagle, or masked villains, like the Phantom of the West, and thus MYSTERY's phenomenality is naturalistic.