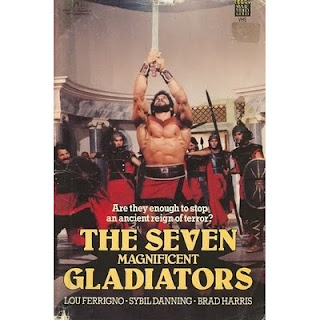 
Silly as THE BARBARIANS is, it's a lot more lively than this unholy crossbreeding between an Italian peplum-flick and the THE MAGNIFICENT SEVEN.

For one thing, even though this flick uses the same basic rationale as the 1960 western-- which was itself patterned after the Kurosawa film SEVEN SAMURAI-- the narrative focus is only on muscleman star Lou Ferrigno, whose tenure on the INCREDIBLE HULK series had concluded with the program. There are six other warriors-- not all of whom are gladiators-- but none of them are as important to the story as Ferrigno's character Han, who even gets to wield a magic sword as proof of his special valor.

As in the 1960 film, a small village, one in archaic Italy rather than Mexico, is constantly being bled by raiders. This time, though, the raiders work for a man named Nicorete (Dan Vadis), who claims to possess semi-divine status, though the script never says what god his mortal mother slept with. His blind mother Anakora functions as some sort of local oracle, but she refuses to render any aid to her rotten son. She also blames him for her blindness, without every explaining why.

However, whereas in the western the embattled villagers had to scrape together enough money to hire seven gunslingers, here there's another temple maiden, Pandora, who has acquired a magic sword. She and her fellow vestals go looking in the big city-- I guess it's supposed to be Rome-- for a hero, though they have no idea who he is. It's soon demonstrated that the sword is particular about who handles it, burning anyone who touches it, except for the one destined to wield the weapon against evil.

The maidens eventually locate Han, a gladiator who's on the outs with his emperor. (Though there aren't many scenes in Rome, SEVEN must have the most underpopulated Roman courts ever depicted in cinema.) Han gets hold of the sword and demonstrates that he's fit to wield it, after which he consents to help the beleaguered villagers without much persuasion. He then proceeds, in a rather aimless manner, to enlist other justice-loving heroes to his cause. To be sure, one of "Han's six" gets the notion-- based on absolutely nothing-- that the village may hide some fabulous treasure. This role is essayed by Sybil Danning, playing the "Brad Dexter" role from the western.

As in the 1960 film, once Han and his allies arrive, they spend a little time training the peasants to fight back-- and when Nicorete's soldiers come for tribute, the gladiators and the villagers beat them back, apparently killing Nicorete. Here the viewer finally gets a demonstration of the villain's half-divine status, for he comes back to life, visits his mother for no particular reason and kills her.

While the heroes are busy letting their guards down, Pandora tries to talk them into leaving, apparently because she's afraid they won't like living in a small village. She's apparently so focused on saving their lives that she accepts a bargain with Nicorete. The warlord ambushes the heroes but then sets them free without their weapons-- though this seems like a poor trade, given that the village really doesn't have any great resources to offer the warlord.

Naturally, at the first opportunity, all of the good gladiators return to thrash the villains, in some of the dullest battle-scenes ever filmed. In a muddled conclusion, Han duels Nicorete, and after breaking the evildoers's sword, tries to bear-hug the fiend to death. Apparently Nicorete's god-power makes him burning hot, so that Han has to let go, but the demigod's powers aren't fiery enough to protect him when he foolishly picks up the magic sword-- and he goes up in smoke.

Ferrigno, in his first feature-film starring role, is dull throughout. Dan Vadis, who played Hercules a few times in the 1960s, makes the most of his role as the heavy, and the scenes with his mother have a little more intensity than anything else. Danning distinguishes herself as the team's only distaff fighter, and handles a sword better than some of the male actors.