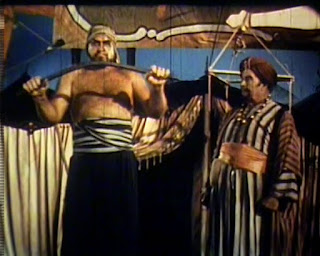 
Though there's almost no chance that this 1950s programmer influenced 1992's ALADDIN, it's an interesting coincidence that this is one of the few English-language pictures, prior to the Disney film, to give the keeper of the lamp a rather swashbuckling nature.

To be sure, the filmmakers, director Lew (THE RAVEN) Landers and two screenwriters, were probably channeling one of the story-tropes from 1924's THIEF OF BAGDAD. The opening establishes that an invader named Bokra and his soldiers have taken over Bagdad and that the leader plans to marry Princess Zafir (the always reliable Patricia Medina). Aladdin (Johnny Sands), who happens to be a thief rather than the lazy layabout from the Arabian Nights tale, decides that he wants an up-close look at the famed beauty, and just like the Fairbanks-thief, Aladdin scales the palace wall and pitches woo to the princess. Zafir's not a shrinking-violet, as she slaps his face, but on some level the viewer's led to believe that she's covertly impressed by his daring.

Aladdin escapes the palace with his hide intact, but, in the biggest similarity to the folktale, an evil magician, one Mahmud, persuades the thief to haul an innocent-looking lamp out of a deep well. Aladdin takes the job, but when the magician seems a little too eager to dispense with his helper's services, Mahmud angrily seals Aladdin up in the well. However, the thief soon discovers that he can call upon the genie of the lamp to obtain freedom and riches. But there's a catch not present in the original tale. The genie wants to win his freedom from the lamp, and he can only do so if he slays his master. However, the genie can only make an attempt on his master's life immediately after the master makes a wish. Further, to judge from the forthcoming attempts, the genie has to disguise himself as a mortal and kill his master with a weapon, rather than just zapping his enemy into dust.

While nasty Bokra plots to make Zafir marry him, Aladdin conjures a fabulous palace to impress the princess. In a plot-thread not unlike the Disney film, Zafir can't be won over by phony miracles, so the piqued Aladdin uses his second wish to conjure up the world's most beautiful woman, only to find that she doesn't please him as much as Zafir. (It helps that Zafir makes the scene in time to save the hero from his baser nature.) After both wishes, Aladdin manages to thwart the genie's assassination attempts. However, before Aladdin can make his third wish, Mahmud intrudes and steals the lamp-- though, being a secondary villain, he soon yields pride of place to Bokra.

Without going into further plot-details, suffice to say that Aladdin is a doughty type in this version, good with a sword or with his fists. However, when Bokra gets into the act of genie-conjuring, he gets a little too incautious about observing the rules-- thus paving the way for the genie's freedom and the lovers' reunion. The genie even tosses in a little moralizing at the end, regardless the fruitlessness of idle wishing rather than taking action. Be that as it may, I grade LAMP's mythicity a little higher than the average Oriental sword-and-slipper flick for its ingenious play on the tropes of genie-mythology.

Aside from JUNGLE JIM IN THE FORBIDDEN LAND, this was Landers' final metaphenomenal film, though during his later TV career he executed some SUPERMAN episodes as well.
Posted by Gene Phillips at 3:30 PM
Email ThisBlogThis!Share to TwitterShare to FacebookShare to Pinterest
Labels: combative adventures, the marvelous