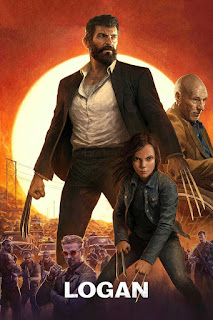 In my review of the graphic novel OLD MAN LOGAN, I said:

...once I read the Millar GN, I was happily disabused of the idea that anything by Millar could have had quality in its original form. Like the 2008 movie WANTED, the 2017 LOGAN-- directed by James Mangold, who also helmed the respectable 2013 WOLVERINE-- just borrows dribs and drabs from the Millar continuity. In fact, the only things Mangold really takes away from Millar's GN are the ideas that (1) in some future setting, Wolverine has gotten very old and beat-down by coping with everyday life, which is a consequence of the fact that (2) most mutants and superheroes are out of the picture.

I should note that in the comic book another reason that Wolverine-- whom I should start calling Logan, as the film does-- is so beat-down is because he killed some or all of his fellow X-Men, in keeping with Millar's apparent love of wholesale slaughter. Mangold's script alters this plot-detail, briefly explaining that the other X-Men were accidentally slain by an aging Professor X, whose mental powers have become lethal due to a degenerative disease. This makes for a much better dramatic tension between Logan and the Professor, as the aging ex-hero seeks to care for his ninety-something former mentor. Further, Logan too is sick, thanks to a slow-acting poison introduced into his system in the previous X-film X-MEN APOCALYPSE.  Thus Mangold's scenario places both former heroes behind the eight ball, aging and dying, apparent relics of the X-franchise that's been almost extinguished by the deaths of the heroes and the dwindling births of mutants.

However, Mangold provides redemption with his most rewarding deviation from Millar's brain-dead scenario. Thus the two older men are forced to take custody of an 11-year-old mutant girl named Laura, who is based on the character X-23 from other X-comics. Laura is eerily silent for almost half the film, since she's spent most of her young life in a research facility involved in creating mutant children as living weapons. In a patently political reworking of the comics-origin, Laura is one of several mutants whose sperm was taken from mutant donors and birthed from poor Mexican mothers (who aren't allowed to survive their role as brood-mares). Laura is also silent due to an extreme ambivalence toward Logan, since he is her biological father.

The research facility, known as Alkali Transigen, may be in Mexico, but the parent corporation is American, and is staffed primarily by Americans, including mad scientist Doctor Rice and nasty enforcer Pierce. Thus America, which has often been portrayed as the "golden gate" of freedom for immigrants, is a place of peril for Laura and other children who escaped the Mexican facility. Logan, who has taken a job as an uber-driver, is approached to take Laura to a rendezvous-point on the Canadian border, where the escapees are supposed to converge. The pursuit of Pierce and his mercenaries has much to do with helping Logan decide to help the enigmatic eleven-year-old. Thus LOGAN becomes a road trip in which two moribund heroes seek to liberate a young female heroine from evil corporate types-- who are, incidentally, also responsible for the downturn in mutant births, through their manipulation of genetically-modified foodstuffs.

Though LOGAN is rife with extreme R-rated violence-- particularly when Rice brings in a new, almost mindless attack-dog, another clawed warrior named X-24-- Mangold's script earns the audience's sympathy with its nuanced study of main characters Logan, Laura and the Professor. I'd rate it as one of the most dramatically successful X-films, though in terms of its symbolic discourse (a.k.a. mythicity) never goes beyond the rating of "fair."
Posted by Gene Phillips at 2:00 PM
Email ThisBlogThis!Share to TwitterShare to FacebookShare to Pinterest
Labels: combative adventures, the marvelous